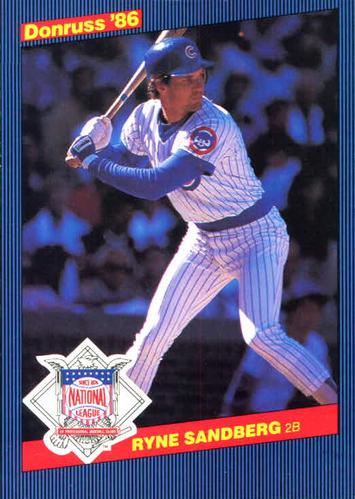 The Chicago Cubs led the National League in home runs in 1986, and their game against the San Francisco Giants on July 19 was one of six times during the season in which they hit four round-trippers. Their home-run outburst was the difference in a comeback win against the first-place Giants. All-Star second baseman Ryne Sandberg contributed one of them among his three hits in the game.

The 1986 season was the second in a row in which the Cubs led the league in homers, and their 155 round-trippers were their most since 1970. However, their home-run prowess wasn’t enough to make them competitive, as they were 37-50, 23½ games behind the first-place New York Mets on July 19.

While the game had little meaning for the Cubs, the Giants were in the middle of a first-place battle in the West Division. They led the Astros by one game, while San Diego and Cincinnati were also close behind.

Gene Michael was the third Cubs manager of the season, following the firing of Jim Frey after 56 games and John Vukovich’s two games as interim manager. Michael had previously managed the New York Yankees in parts of two seasons. Coming into the game on July 19, Michael’s Cubs had risen out of the division cellar, but their season was practically lost at that point.

Left-hander Steve Trout was the starting pitcher for the Cubs. The team was 5-2 in his last seven starts, although he wasn’t involved in any of the decisions. Mike Krukow, who began his career with the Cubs and pitched six seasons with them, got the nod as Giants starter. The right-hander was having one of his best seasons with an 11-5 record coming in to the game.

A crowd of 31,273 attended the Saturday afternoon game at Wrigley Field.

Trout started out well by retiring the side in order in the first inning, but his success would be short-lived.

Krukow gave up a run in the bottom of the first, when Leon Durham singled to score Davey Lopes. The Giants bounced back in the top of the second on Bob Brenly’s double, which scored Candy Maldonado, who had singled.

In the top of the third, Trout gave up four more runs. Joel Youngblood’s single scored Randy Kutcher and Robby Thompson, while Chris Brown’s double drove in Jeffrey Leonard. After Youngblood scored the Giants’ fifth run of the game on Maldonado’s groundout, Trout was replaced by Guy Hoffman.

In the bottom of the inning, Lopes doubled, Sandberg singled, and Gary Matthews hit his 11th home run of the season to narrow the Giants’ lead to 5-4. It was his sixth home run in 12 games.

Hoffman held the Giants scoreless in the fifth. In the bottom of the frame, Krukow ran into trouble again. With two outs, he gave up a single, a walk, and Shawon Dunston’s 10th homer of the season to put the Cubs ahead. Dave Martinez immediately followed with his first major-league home run to make the score 8-5.

Hoffman kept the Giants at bay again in the sixth, but was replaced by Randy Gumpert in the seventh after giving up a leadoff double to Thompson. Harry Spilman doubled to score Thompson, which pulled the Giants within two runs of the Cubs.

Facing Frank Williams in the bottom of the seventh, Jerry Mumphrey singled to score Durham. After Juan Berenguer struck out Dunston and Mark Davis struck out Martinez, Greg Minton, the fourth Giants hurler in the inning, gave up a single to Keith Moreland that scored Davis.

With the score 10-6 in the bottom of the eighth inning, Sandberg hit a solo home run off Jeff Robinson for the final run of the game.

Hoffman got credit for the win, raising his record to 4-2, while Krukow fell to 11-6. The eight earned runs he gave up were the most he yielded in a game during the season. However, he won nine of his last 12 decisions to win 20 for the only time in his career. The 34-year-old finished third in the National League Cy Young Award voting.

After the game, Michael questioned Trout’s effectiveness as a regular in the rotation and hinted at the possibility of moving him to the bullpen.1 Trout eventually lost his starter’s role, as the Cubs revamped their starting rotation to include rookies Jamie Moyer, Greg Maddux, and Drew Hall in the last month of the season.

Six of the Cubs’ 15 hits went for extra bases, including the four home runs. Davis and Sandberg each collected three hits.

Sandberg had been batting third in the lineup before the All-Star break. After that he was moved up to second, with Matthews batting behind him. Michael explained why he made the change: “I had a talk with [coach John] Vukovich about it. He said that’s the way they hit in ’84 [when the Cubs won the East Division]. I wanted Matthews third because he’s hot. Sandberg can hit in any spot in the order, but sometimes a change like this makes a hitter feel a little less pressure.”2 Sandberg’s three hits in the Giants game brought him to 8-for-13 since the change, and he would bat almost 30 points higher the rest of the season.

A perennial Gold Glover, Sandberg had one of his best seasons defensively; he made just five errors, setting a National League record (minimum 800 chances) for the highest fielding percentage by a second baseman (.9938) and tied the major-league record for the fewest errors in a season.3

However, Sandberg’s talents and the team’s overall home run proficiency weren’t enough to move the needle for the Cubs in the division standings. They finished fifth in the NL East Division with a 70-90 record.

The Giants wound up in third place in the NL West. It was their first winning season since 1982, and they went on to win two division championships in the next three seasons, including a World Series appearance in 1989.

The 1986 SABR Convention was held in Chicago on July 18-20. Attendance at the Cubs-Giants game was one of the activities of the event. The convention, which was held at the Loyola University Lakeshore Campus, was the last annual meeting held at a college campus using dormitory rooms and cafeteria dining. A total of 479 members and guests attended. Chicago Tribune sportswriter Bill Gleason was the banquet speaker. Chico Carrasquel, John Klippstein, Rich Nye, Ted “Double Duty” Radcliffe, Marv Rotblatt, and Nelson Potter made up the player panel. SABR’s constitution was amended to make the offices of president, vice president, and treasurer two-year positions rather than one year.4