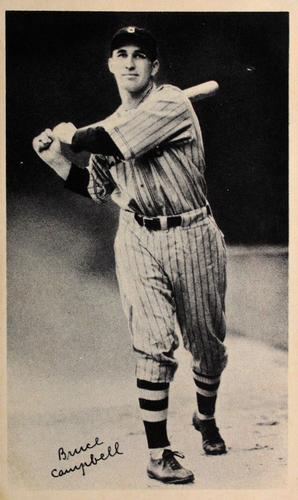 The 1936 All-Star Game was still five days away, but the race for the American League pennant was essentially over. The New York Yankees held a 10½-game lead over Detroit, the reigning two-time American League champion, and Boston. The Yankees had not been to the World Series since 1932, and were making great strides to return.

For the rest of the teams in the league, playing the rest of the games on their schedule appeared to be a mere formality. Two of those teams were the Cleveland Indians and the St. Louis Browns. It had been 10 years since the Indians were a factor in the pennant race, while the Browns had not been relevant since 1922.

The next day the Indians were without Earl Averill. The right fielder suffered a leg injury in the previous day’s nightcap and would not be available to play. Bruce Campbell started in his place. Campbell had just returned to the team a couple of weeks earlier, and his maladies were much more serious than the charley house that hindered Averill.

Campbell had been stricken with spinal meningitis during the 1935 season, his first with the Indians after coming over from the Browns. He began to have headaches and feel woozy on August 3 in Detroit.2 After a long nap in his hotel room, Campbell began vomiting. He was taken to a hospital, where he was diagnosed with the meningitis.3 A serum that was designed to isolate the meningitis was shot into his spine. He began to feel better, but relapsed and had another occurrence of the meningitis. Campbell missed the rest of that season.

He contracted the same disease on April 30, 1936, in New York. He had the same symptoms and he said his legs felt like lead. He traveled with the team to Boston, where he was eventually hospitalized and a second serum was administered to his spine.4

All things considered, Campbell made a speedy recovery, rejoining the Indians on June 16.5

The pitching matchup for the first game of July 2 doubleheader featured Lloyd Brown (4-7, 3.32 ERA) for the Indians and Roy Mahaffey (2-3, 7.98 ERA) for St. Louis. Brown was riding a four-game losing streak during which his ERA rose from 1.77 to 3.32. Mahaffey had pitched primarily with the Philadelphia Athletics during his career. Although he had been a winning pitcher for the A’s (64-43) in six seasons, he had plenty of run support, pitching to an  ERA of 4.82 over 197 appearances.

Cleveland struck in the first inning when Odell Hale tripled to right field and Campbell singled him home. St. Louis came back in the bottom of the second inning. Beau Bell led off with a walk and went to third on a single by Sam West. Jim Bottomley’s groundout tied the score at 1-1.

The Indians tacked on three more runs in the top of the third. The big blow was a two-run homer by Hale, his seventh. The third run developed when Campbell singled to left and moved to second base as Hal Trosky grounded out to short. Campbell came home on a single by Billy Sullivan.

The Indians’ 4-1 lead was short-lived. Ollie Bejma led off the Browns’ third with his first home run of the season. After Mahaffey flied out to left, Lyn Lary walked. Harlond Clift struck out and it looked as if Brown might get out of the inning. But Moose Solters tripled to plate Lary. Bell singled home Solters to tie the score again, this time at 4-4.

Mahaffey started the top of the fourth inning by walking Joe Vosmik and Bill Knickerbocker. St. Louis manager Rogers Hornsby went to his bullpen and brought in Russ Van Atta. Brown sacrificed the runners up a base and Roy Hughes knocked in both runners with a single to center field. Hale reached first base on a wild throw by third baseman Clift. Campbell singled, his third hit of the day, and Hughes scored. Hale also scored when Bell booted Campbell’s hit in right field. After Campbell stole second base, Van Atta closed out the half-inning with strikeouts of Trosky and Sullivan.  But the Indians’ onslaught had doubled their run total; it was now 8-4, Cleveland.

Campbell was clearly the difference in the game. He was six-for-six with five singles and a double. He drove in five runs, scored one, and stole a base. Although Brown yielded 13 hits and walked five, he went the distance for his fifth win of the season. Hughes and Hale each added two RBIs to the Cleveland cause.

Campbell started the second game of the doubleheader and singled in his first at-bat. But then manager Steve O’Neill removed him from the game for a well-deserved rest. On the day, Campbell was seven-for-seven. Cleveland took the second game as well, 4-2, on a five-hitter by Johnny Allen.6

Cleveland (80-74) finished the season in fifth place, 22½ games behind New York. St. Louis (57-95) finished in seventh, a whopping 44½ games off the pace, but 4½ games ahead of the eighth-place Philadelphia Athletics.

In addition to the sources cited in the Notes, the author accessed the Baseball-Reference.com and Retrosheet.org websites for box scores, play-by-play information, and other data.

2 Campbell had gone three-for-five against the Tigers that day and was hitting .325 through 343 plate appearances.

6 Allen did, however, issue nine walks.