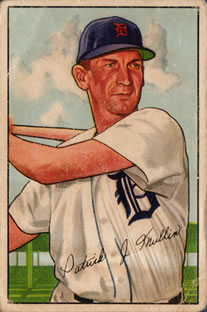 Sunday, July 20, 1947, was a sunny day in Detroit after a cool and rainy Saturday. The second-place Tigers were wrapping up a four-game set with the New York Yankees, whom they trailed by 11½ games.

Good weather had been in short supply in Detroit. Tigers management was expecting a crowd of 40,000 for Friday’s series opener, fans eager to see if their Tigers could end the Yankees’ 19-game winning streak, tied for the longest in American League history. There were many umbrellas among the 28,718 fans who braved dark skies before Friday’s twilight start, then rain in the early innings, as Fred Hutchinson pitched a two-hitter to hand the Yankees their first loss since June 29. It was a cool 63 degrees on Saturday, and the rain was lighter, but that only helped push attendance to 31,772 to see a 2-1 loss. Normally, Detroiters could expect highs in the low 80s in July.

The Yankees would be leaving town after the doubleheader, but so would the Tigers — for 15 days. It was the fourth of five Sunday doubleheaders at Briggs Stadium that year, the last before lights were installed. Less-than-ideal weather had been putting a damper on crowds all season, even with two games for the price of one. Despite rain and drizzle, 36,443 saw their first-place team split with the Chicago White Sox in the May 25 doubleheader. But a month later, after the Tigers had gone from first place and eight games over .500 to third place and a .500 record, only 13,292 were willing to deal with a thunderstorm to see the Tigers sweep the last-place St. Louis Browns on June 29 and go two games over. On Sunday, July 13, 40,286 had seen the Tigers sweep the A’s in a doubleheader, the biggest crowd of the 11-day homestand and only the second day of the homestand with no rain recorded. Would the sun again bring more fans?

The ballpark’s last expansion, during the winter of 1937-38, had raised the official capacity to 56,000, making Briggs Stadium the AL’s third largest ballpark behind Yankee Stadium in New York and Municipal Stadium in Cleveland.1 Once this season, paying customers had more than filled every seat. The season’s largest crowd (56,367) had turned out for a Memorial Day doubleheader, on Friday, May 30, to see the then-first-place Tigers split with the last-place Browns. It was a relatively chilly 57 degrees. (The normal high would be in the mid-70s). The second largest crowd was for a single game, on Sunday, June 8, when 55,941 had seen the first-place Tigers beat the Boston Red Sox, 5-0, to pick up a half-game on the Yankees, who split a doubleheader in St. Louis.

Sunday’s crowd was going to be buoyed by a group of 150 from Fayette County, Pennsylvania, coming to Detroit by special train.2 They would be there for Pat Mullin Day, honoring their hometown favorite, Tigers outfielder Pat Mullin, between games with gifts including a gold-studded Elks ring.3 They were not disappointed: Mullin, who had been a member of the AL All-Star team earlier in the month, homered in both games.

What fans also got was a dry day, with a low of 51 giving way to a high of 74, a big improvement over most days of the homestand, which had been warm (four were above 80) but wet. It must have felt like baseball weather to a lot of people in the Detroit area, because thousands were converging on the corner of Michigan and Trumbull.

What they got (if they were Tigers fans) was a great day of baseball. Hal Newhouser won his 10th with a three-hitter in the opener to win, 4-1. He faced only 28 batters (and threw 89 pitches), and the Yankees left none on base (a mark that has been accomplished many times in both leagues). The Yankees scored in the fifth, when they got two of their hits, triples by Joe DiMaggio and Bill Johnson. Mullin, Eddie Lake, Dick Wakefield, and Hal Wagner drove in runs for Detroit.

The second game was a wild one that Detroit won in 11 innings, 12-11. The Tigers’ 5-4 lead evaporated in the sixth when the Yankees batted around to take an 11-5 lead. Mullin’s two-run pinch homer in the bottom of the sixth cut the deficit to four. By the bottom of the ninth, according to accounts in the Detroit News and Detroit Free Press, thousands had left.4

Before this exodus, the crowd had been announced as a Briggs Stadium record 58,369. Club officials put the overflow in the outfield, something they hadn’t done since the 1930s.5 The July 30 edition of The Sporting News noted that it was the largest Sunday crowd of the season, beating the 58,339 at Yankee Stadium on April 27 for Babe Ruth Day ceremonies.6

After that exodus, estimated by the Detroit News at 15,000, John McHale led off with a pinch single off Randy Gumpert, the third Yankees pitcher. Eddie Lake followed with a single. Next up was Roy Cullenbine, who had walked four times. He sent Gumpert’s pitch into the right-field stands to pull the Tigers within one run (11-10) with none out. Allie Reynolds, the winner of Saturday’s game, replaced Gumpert. After Dick Wakefield reached first base, Reynolds gave up a game-tying double to George Kell (his first hit in 13 at-bats).7 Vic Wertz was walked intentionally, and Hoot Evers sacrificed. Eddie Mayo was walked to fill the bases with one out. Doc Cramer, batting for Bob Swift, fouled out. McHale, who had started the ninth-inning rally, came up again, but he watched a third strike to end the rally.

After rookie Art Houtteman pitched a perfect 11th, Wertz opened the Tigers’ half of the inning with a single, but he was forced by Evers. Mayo sent a double to right-center, and Evers scored the winning run with a head-first slide to beat Tommy Henrich’s long throw.

The Detroit News, an evening paper, ran a panoramic photo across the top of its sports section the next day with a white headline superimposed on the photo:

But the editors didn’t squeeze a word of the story on the front page of the first edition. The morning Free Press had a two-column headline (in an eight-column paper): “58,369 See Tigers Whip Yanks Twice.” The game account was continued in the sports section.

The record crowd gave a boost to Tigers season attendance, but the numbers were dismal, compared with the record-breaking 1946 season. The Free Press noted that at 939,913 after 50 games, the Tigers were 252,547 behind the 1946 attendance at that point, and it blamed the rain.8 The Tigers finished the season with 1,398,093 paying customers, fourth in the eight-team AL. That ranks 45th of the team’s 114 seasons through 2015 and second (to 1946) of those with only day games.

When the ballpark, by then known as Tiger Stadium, closed after the 1999 season, this July 20, 1947, crowd remained the largest ever to pay to see a game at Michigan and Trumbull.

7 Game accounts are inconsistent as to how Wakefield reached base (or if he even did at all). Both the Detroit News and the Free Press wrote that he was walked by Reynolds. The News said that Mierkowicz ran for Wakefield and later scored the tying run. Baseballreference.com and Retrosheet, which both have a box score but no play-by-play account of the contest, show that Wakefield had no walks in the game, but Mierkowicz had one base on balls in two plate appearances (he struck out in his second at-bat later in the game). The Sporting News box score does not even show Mierkowicz running for Wakefield.