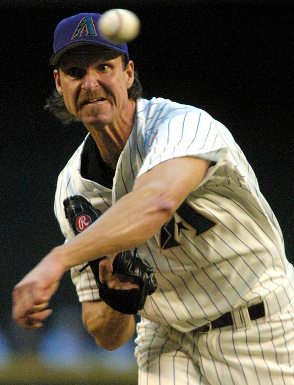 Seattle was the scene of Randy Johnson’s rise from being just one piece of a trade for the Expos to acquire Mark Langston, to being one of baseball’s best pitchers. As a Mariner, Johnson was named to half of his 10 All-Star teams, won the first of his five Cy Young Awards (and finished in the top three in voting three other times), and fired pitches over the heads of John Kruk and Larry Walker at the All-Star Game in 1993 and 1997 respectively. Yet he had struggled in his last few months in Seattle, losing more games than he won while posting an ERA over 4.

Blame for this was mostly laid on him, as he was disgruntled that his trade demands had not (so far) been met. He was described in the media as “self-centered and emotional, 34, and with a history of back problems,” and was derided for expecting a contract similar to the one Pedro Martinez had received from the Red Sox.1

Johnson excelled after being traded to the Astros, going 10-1 with a 1.28 ERA in Houston as the Astros won the NL Central Division championship but fell to the Padres in the Division Series. Johnson signing with the Diamondbacks in the offseason was both a surprise and a major coup for the young franchise; entering just their second season, they demonstrated the ability to sign big-name free agents, and made Johnson the highest-paid pitcher in baseball.2 The investment was worth it: Johnson won the Cy Young Award all four seasons of the original deal, and compiled 38.1 Baseball-Reference Wins-Above-Replacement (bWAR) while earning $49,750,000.

So far the 1999 season had not gone as either Johnson or the Diamondbacks hoped. Despite a career year from Jay Bell and Luis Gonzalez turning into a star, the Diamondbacks were scuffling. They entered the day with a 49-45 record, 2½ games behind the Giants in the NL West, and attempting to avoid getting swept by the Mariners, who were 45-47. Johnson, despite pitching well, hadn’t won a start for over a month. The Diamondbacks had consistently failed to give him sufficient run support. In his five previous starts, he had allowed six runs (five earned) while striking out 62 and walking 12. He won none of the games, because he received exactly zero runs in support in four of them. In the fifth, he left with a 2-0 lead only to see it blown.

In returning to Seattle, Johnson got to play for the first time at Safeco Field. Johnson had been a key part of the team (with Ken Griffey Jr., Edgar Martinez, and Alex Rodriguez) that had finally brought postseason baseball to Seattle and led to the construction of the ballpark. He had spent almost a decade in Seattle; fan attitude before this game “felt like a thank-you note to Johnson,” his disputes with Mariners brass forgotten.3

It was supposed to be a matchup of two southpaws: Jamie Moyer, the new Mariners ace, was supposed to start, but Moyer missed the start because of muscle stiffness and Frankie Rodriguez started in his place.4 Perhaps facing a spot starter instead of the Mariners’ new ace should have made things easier for the Diamondbacks, but they continued to struggle. Rodriguez, making his fifth start of the season, had an ERA of 7.34 entering the game, but that did not seem to help the Diamondbacks. True, they had traffic almost every inning. Gonzalez singled in the first, Rodriguez allowed a walk and a single in the second, Bell doubled in the third, and David Dellucci singled in the fourth while Rodriguez allowed another walk. The fifth inning featured Jay Bell straining his hamstring on a groundout to shortstop, followed by Gonzalez and Matt Williams being stranded on the bases. At this point, the Diamondbacks had not only failed to score and had left eight runners on base, but they were down a player who had hit 27 home runs so far in the season. The Diamondbacks had scored just five runs to support Johnson over the previous 50 innings.

Johnson may not have been at his most dominant, but he was effective. Through five innings, he allowed three hits: a double by Alex Rodriguez, a single by Edgar Martinez, and a rare bunt single by Butch Huskey, while striking out seven and walking none. Still, there was the issue of run support.

Left-hander Damaso Marte relieved Frankie Rodriguez in the sixth, with the Diamondbacks having six left-handed bats in the lineup.5 Manager Lou Piniella’s plan backfired as the Diamondbacks suddenly found their bats and sent all nine men to the plate, scoring four runs. Tony Womack opened the scoring with a bases-loaded single (driving in two) and Williams drove in two more with another bases-loaded single. By the time Johnson returned to the mound, he had a 4-0 lead. David Bell singled, but Alex Rodriguez grounded into a double play. Ken Griffey Jr. was ruled hit by pitch on a 3-and-2 count, despite home-plate umpire John Shulock initially ruling that the ball had hit his bat. Diamondbacks manager Buck Showalter was ejected, bowing toward Griffey as he left, apparently of the opinion that Griffey had talked Shulock into awarding him first base.6 Johnson got David Segui to ground into a fielder’s choice to end the threat.

Johnson fanned Jay Buhner and Russ Davis (for the third time in the game) in the seventh. This gave him nine strikeouts for the game and 2,557 for his career to move past Jerry Koosman into 18th place on the career strikeout list.7

The Diamondbacks extended the lead in the eighth when Bernard Gilkey, who had entered the game when Bell exited, hit a two-run home run. Johnson was tiring. He allowed two hits in the eighth, but retired Griffey on a fly out and struck out Edgar Martinez to end the threat. In the ninth he gave up a single to Jay Buhner but no runs. While it may not have happened in the uniform Mariners fans wished, Randy Johnson became the first pitcher to throw a shutout in Safeco Field.

But the game meant more to Johnson than just a single shutout. It was his opportunity to show the Mariners front office that he should have received the contract extension he believed he deserved.8 It also gave Mariners fans (the real losers in the dispute between Johnson and ownership) the opportunity to give deserved standing ovations to the holder of many Mariners’ career pitching records.9 As Alex Rodriguez put it, “Anything less would have been uncivilized. He was standing on the mound he built.”10 (Over 20 years later, Johnson’s team records for pitching bWAR, wins, strikeouts, games started, and innings pitched have been surpassed by Felix Hernandez. As of 2020 Johnson remained the record holder for bases on balls and shutouts.)

“With this one overwhelming encore, almost 12 months after the trade, Johnson finished the Seattle chapter of his life.”11 Despite spending more of his career in Seattle than anywhere else, Johnson would be identified as a Diamondback, winning four Cy Young Awards, named to five All-Star teams, winning the World Series MVP award, and pitching a perfect game during his tenure with the franchise. He finished off the 1999 season with a 17-9 record, but led the league in ERA, FIP, strikeouts per nine innings, complete games (12, which was his career high), and strikeouts (364). He won the first of four consecutive Cy Young Awards. He entered the Hall of Fame as a Diamondback, the first (and as of 2020 the only) player to do so.

This game was a turning point for the Diamondbacks. The 15 hits were more than they had managed in Johnson’s last five starts combined. Over the previous month, they had struggled to an 8-17 record. From this day forward, the Diamondbacks went 51-17, a .750 winning percentage, to finish with 100 wins for the only time in franchise history. They became just the eighth team in the Expansion Era to post a 68-game stretch with a .750 winning percentage.12 This was remarkable because it was achieved without a big winning streak. Their longest winning streak was seven games, which only equaled their longest winning streak in the first half of the season. But they lost consecutive games only three more times for the rest of the season, and never more than three in a row. The season ended in disappointment, though, as the Diamondbacks were upset by the Mets in the Division Series, but it was still a great second season for the franchise.

1 Steve Marantz, “No Hope,” The Sporting News, August 3, 1998: 19. While the issue is dated after the trade of Johnson to the Astros, the article was clearly written before.