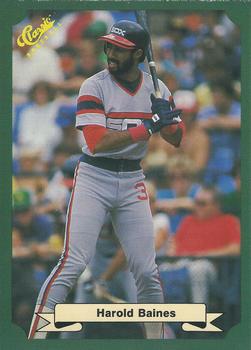 Harold Baines first attracted the attention of the Chicago White Sox as a 12-year-old, when then-team owner Bill Veeck saw him hit a 400-foot home run in a little league game.1 Six years later, in 1977, the White Sox made Baines, a high-school senior in St. Michael’s, Maryland, the number-one overall pick in the June amateur free-agent draft.

Baines made his major-league debut in the White Sox season opener in 1980. By 1987 he had established himself as a cornerstone player in the franchise and one of the better players in the major leagues, indicated by his three consecutive All-Star Game appearances (1985-87) and a handful of down-ballot MVP votes including a ninth-place finish in 1985. By July 1987, the 28-year-old Baines was approaching a team milestone: the White Sox home-run record.

Bill Melton held the record, set during his tenure on the South Side between 1968 and 1975. Before the White Sox traded him to the California Angels, Melton hit 153 home runs, enough to eclipse Minnie Minoso, the franchise’s previous home-run leader.

Baines started off the 1987 season with the team record in sight, but suffered two separate issues with his right knee early on. First, he missed half of spring training in 1987 while recovering from right-knee surgery the previous October.2 The outfielder suffered an unrelated injury on Opening Day against Kansas City and underwent arthroscopic surgery on the same knee, which resulted in a trip to the disabled list3 and caused him to miss a month of action.

Baines did not miss a beat in the batter’s box upon his return to the lineup in May, though he spent time almost exclusively at designated hitter rather than his customary right field. Baines hit well enough in the first half, even with the missed time, to represent the White Sox in the All-Star Game. By the time the Orioles came to town in July, Baines had 13 home runs and a .311 batting average.

Baines tied Melton’s franchise record at home on July 21 with a home run to right-center field off Orioles pitcher Ken Dixon.4 “A win would have made it better,” said Baines after the game, which the White Sox dropped to the Orioles, 11-6.5

The next night, Wednesday, July 22, Baines would have the opportunity to claim first place all for himself in front of the hometown crowd at Comiskey Park. José DeLeón would take the mound for the 37-54 White Sox looking to avoid the series sweep against starting pitcher Mike Boddicker and the 41-53 Baltimore Orioles, who had won seven straight.

Batting third and starting as the designated hitter, Baines struck out but reached base on a throwing error by Orioles catcher Terry Kennedy in his first plate appearance. Baines ended up being forced at second to end the inning.

After two uneventful frames, the Orioles got the scoring started with a three-run third inning. Mike Young and Ken Gerhart reached on singles. After Alan Wiggins sacrificed, Billy Ripken walked, bringing up the heart of Baltimore’s order. Cal Ripken Jr. went down on strikes for the second out of the inning, but Eddie Murray kept it going by drawing a walk, forcing Young home. Larry Sheets followed Murray with another single that plated two runs. Ray Knight struck out looking to end the inning with the Orioles up 3-0.

The White Sox answered in the bottom of the third inning. Ken Williams hit his fifth home run of the year, a solo shot off the starter Boddicker. Shortstop Ozzie Guillén, batting leadoff for the game, singled to right field, stole second, and reached third base on Donnie Hill’s groundout. This brought Baines to the plate for his second plate appearance of the evening.

On a tailing fastball6 from Boddicker, Baines made White Sox history, hitting the pitch 416 feet into the center-field bullpen7 for his 155th home run, setting the franchise record and tying the game at 3-3.

As he rounded the bases, Baines “reacted with uncharacteristic emotion” and clapped his hands while rounding first base, according to Ed Sherman of the Chicago Tribune.8 Baines received a standing ovation and a curtain call from the 12,780 White Sox faithful,9 and eventually emerged from the dugout to tip his cap in appreciation.

“Curtain calls go along with the job,” Baines said after the game. “But I don’t like to do that.”10

“In a way it shows up the pitcher, but I think you should go out when you get a standing ovation,” said Baines.11

Boddicker said he didn’t intend to pitch to Baines at all, and that home-run ball off Baines’s bat “wasn’t in the strike zone.”12

“That’s a good case for the rabbit ball,” Boddicker said of the Baines home run,13 alluding to the speculation that Major League Baseball had done something to make the ball livelier in the 1987 season, leading to more hitter-friendly conditions, including an increase in home runs.14

Iván Calderon followed Baines with a solo home run of his own to put the White Sox ahead. Greg Walker singled and Carlton Fisk walked, bringing up Daryl Boston, who singled home Walker to give the White Sox a 5-3 lead. John Habyan came on to replace Boddicker and gave up a single to Steve Lyons but got out of the jam without further damage.

The Orioles retook the lead in the top of the fourth and did not look back from there. Mike Young’s single and stolen base were followed by Ozzie Guillén’s error allowing Alan Wiggins to reach first. With runners on second and third and two outs, Billy Ripken drove in Young with a single off DeLeón to bring the Orioles to within one run. Baltimore tied the game on back-to-back walks to Cal Ripken Jr. and Eddie Murray, which chased DeLeón from the game. Scott Nielsen came in from the bullpen and gave up singles to Larry Sheets and Ray Knight, accounting for three more runs, before Terry Kennedy flied out. The Orioles batted around in the inning and led, 8-5. All five runs they scored were charged to DeLeón and were unearned because of Guillén’s error, which would have ended the inning had he made the play cleanly.

After putting out the fire in the bottom of the third, Habyan was perfect against the White Sox the rest of the game, not allowing a baserunner from the fourth inning on. Baltimore capped off its scoring with two solo home runs off the bat of center fielder Ken Gerhart, one in the fifth inning off Nielsen, and one in the ninth off Bob James. The final score was 10-5 Baltimore, with the win going to Habyan in relief and DeLeón taking the loss.

The Orioles’ win completed their series sweep of the White Sox at Comiskey Park. It was Baltimore’s eighth win in a row and seventh consecutive road win, completing their best road trip in more than 22 years.15

“Breaking the record was fine, but I rather would have won the game,” said Baines, echoing his quote from the night before. “I’m happy to be a part of a record. Maybe after the season it will sink in.”16

The White Sox finished the 1987 season with a 77-85 record. The Orioles ended at 67-95, despite running off an 11-game winning streak that included the sweep of the White Sox. Baines wrapped up 1987 with a .293 batting average, a .352 on-base percentage, a .479 slugging average and 20 home runs; the sixth consecutive season he reached 20-homer mark. Never again would Baines be a regular outfielder, and he spent the rest of his career as a designated hitter because of his early-season injuries in 1987.

Baines spent 14 of his 22 major-league seasons with the White Sox. In 1989 they traded him to the Texas Rangers for Wilson Alvarez, Scott Fletcher, and Sammy Sosa. Baines returned to the White Sox as a free agent before the 1996 season, then was traded again at the trade deadline in 1997, to the Orioles. The White Sox reacquired Baines from the Orioles one final time at the trade deadline in 2000 and he helped Chicago win a division title. Baines finished his career after the 2001 season with 384 home runs, including 221 with the White Sox.

In addition to the sources listed, the author also consulted Baseball-Reference.com.