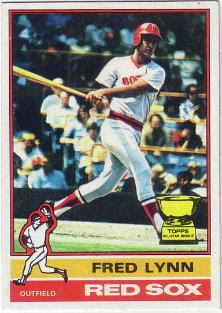 Rookie superstar Fred Lynn stole second base in the ninth inning to score the game’s only run and then made a phenomenal catch of a Graig Nettles gap shot in the bottom of the frame to preserve Bill Lee’s six-hit shutout of the fading Yankees in the opener of a doubleheader in Queens. The loss, New York’s 18th in its last 27 games, dropped the Yankees to just one game over .500.

Neither team had a hit until the fourth, when Boston had the game’s first threat. With Denny Doyle on first base after a walk from New York ace Catfish Hunter, Lynn singled to send Doyle to third with one out. But Hunter struck out rookie Jim Rice and got Rick Miller to ground to first baseman Chris Chambliss to keep the contest scoreless.

Lee held the Yankees hitless until the fifth, when three straight singles strongly suggested that New York would score first. Nettles and Chambliss singled and Sandy Alomar beat out a bunt to load the bases with nobody out. But light-hitting shortstop Fred Stanley hit into a force out, third baseman to catcher, Bobby Bonds fanned on a “fastball” or “hard screwball,”1 and designated hitter Rick Dempsey popped to Miller in right.

The Yankees threated again in the sixth with a leadoff double by Roy White. Cleanup hitter and catcher Thurman Munson failed to advance White with a bunt back to a grateful Lee,2 who threw White out at third. Munson would have just three successful sacrifices in 1975 and a total of 21 in his 11-year career. Munson’s failure proved critical when right fielder Lou Piniella followed with a single that would have scored White but instead only sent Munson to second, from where neither Nettles nor Chambliss could bring him home.

The Red Sox seriously threatened again in the eighth. With two outs, Bernie Carbo, the designated hitter, drew Hunter’s fourth walk of the day. On a full count, Doyle followed with the game’s second and final extra-base hit, a double, but a Piniella-Alomar-Munson relay cut Carbo down at the plate to set up the dramatic ninth inning.

With one out in the ninth, “Lynn hit a short grounder to short which bounced high.”3 Jim Mason, who had replaced Stanley at shortstop after Alex Johnson hit for Stanley in the seventh, failed to handle the ball cleanly and was charged with an error. With two outs, Lynn swiped second: “Thurman Munson’s desperation throw was in the dirt, in front of Mason.”4 Miller then drove in Lynn on Boston’s third and last hit of the day, a liner to left-center that Bonds could not catch.

Lee made the lone run stand up by setting the Yankees down in order in the ninth. He retired Piniella on a comebacker before Nettles “hit a towering, slicing drive to deep left center.”5 The Boston Globe the next day ran two photos of the play from WSBK-TV. In the top frame, center fielder Lynn has left his feet and leaped with an outstretched glove-hand as the ball rapidly descends. In the bottom frame, Lynn has begun to tumble with his left arm and leg thrown up in the air while snow-coning the ball, after which he “bounced three times, rolled over, and, with Jim Rice hurdling him, came up with the ball”6 to complete what coach Don Zimmer described as “the ‘best [catch] I’ve ever seen, given the situation.’”7

“Lynn’s run and ensuing catch struck with electrifying, sudden-death-like effect.”8 The Chambliss foul pop to end the game excited Sox third baseman Bob Heise, who “caught it sliding toward home plate” and put an exclamation point on game one as he “spiked the ball as his teammates rushed onto the field. It had finished a game that seemed like a season, one that had cut the heart out of the New Yorkers.”9

An impending sense of futility descended over New York since Boston, with the 1-0 win, surged nine games ahead of the faux Bronx Bombers, who now toiled in another borough (they played home games at Shea Stadium in 1974 and 1975 while Yankee Stadium was being renovated) and failed to hit with the force of their predecessors.