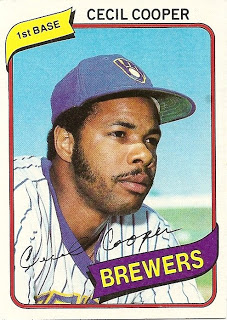 On July 27, 1979 the two-time-defending world champion New York Yankees arrived at Milwaukee’s County Stadium to finish their season series with the Brewers.  The Yankees (55-45) came into the matchup 12 games behind the division-leading Baltimore Orioles. The Brewers, led by second-year manager George Bamberger, were only 7½ games behind with a stellar 60-41 record. The attendance of 47, 928 was the third highest of the year and the near-capacity crowd was in for one of the season’s most exciting games, one that would include eight lead changes, a brawl, and a walk-off home run.

In the 10 previous matchups of the 1979 season, the Brewers had come out on top in six, with five of the games decided by one run. Two Brewers in particular had led the way in dominating fashion.  One was this night’s starting pitcher, Mike Caldwell, who was squaring off against Ed Figueroa. Caldwell had started three times against the New Yorkers so far this season. In those starts Caldwell had gone 2-0 with two complete games, and pitched 10 innings in a no-decision that the Brewers lost in the 11th. In those 28 innings against New York he had allowed only five earned runs. Caldwell had also shut out the Yankees three times in 1978.

The Yankees got to Caldwell and the Brewers first when Mickey Rivers led off with a triple and scored on a groundout by Willie Randolph. The lead was short-lived, however, as Cooper took Figueroa deep in the bottom of the first to tie the game.

In Cooper’s next at-bat, in the third, he flied out to center, but a brushback pitch from Figueroa helped ignite fireworks.

The always testy Reggie Jackson led off the bottom of the fourth. The first pitch was in on Jackson; he accepted it as payback for the brushback on Cooper and considered the matter closed. But then the 2-and-2 pitch knocked Jackson to the ground. With the count full Jackson popped up to Sal Bando at third, and the trouble began. On his way to first, Jackson fired his bat toward Caldwell, who snatched the bat and flung it to the ground, breaking it. After reaching first Jackson flipped off his glasses and beelined for Caldwell, grabbing him by the neck.

Brewers pitcher Bob McClure, the first to reach the scrum, heard Caldwell tell Jackson, “I threw the pitch up and in, but I didn’t throw the second up and in,” to which Jackson kept repeating, “You swear to God? You swear to God?” Caldwell responded, “Hell, yeah, I swear to God.”1

After order was restored, Caldwell was allowed to remain in the game but Jackson was ejected. Yankee manager Billy Martin informed the umpires he was playing the game under protest. On his way back to the dugout Martin got into an argument with some fans and tried to climb into the stands before he was restrained.

When play finally resumed, Lou Piniella tripled to right and Graig Nettles drove him in with a fly ball to center to give the Yankees a 2-1 edge. Reliever Ron Davis replaced Figueroa in the sixth and gave up the lead on a single by Ben Oglivie that scored Don Money.

The Yankees took the lead again in the seventh when Jim Spencer homered. The Brewers tied the game in the bottom half. Charlie Moore doubled and scored on a two-out single by Don Money. Cooper was next up and delivered again, driving pitch by Davis over the wall to give the Brewers their first lead of the game, 5-3.

The eighth inning brought more scoring. Mickey Rivers led off with a single and Willie Randolph brought him home with a two-run homer to tie the game for the fourth time. This knocked out Caldwell, who had given up five earned runs in seven-plus innings. It was his worst start against the Yankees in more than two years.

The score remained tied into the bottom of the ninth. Cooper came up again with two outs against the Yankees super-reliever Rich “Goose” Gossage. Cooper said of the burly reliever, “Gossage was one of the toughest guys I ever faced. He was a big guy and he had that Fu Manchu mustache. He looked like he could take a big piece  of steak and tear it in half.”2 Cooper fell behind Gossage 1-and-2.  “With two strikes, I just wanted to get a hit and get something going,” he said later. Cooper belted a walk-off home run, depositing the 1-and-2 pitch into the right-center-field stands and sending the crowd into frenzied chanting of “Coop … Coop … Coop …” Cooper came out of the dugout twice for curtain calls. He said of the pitch, “He threw it inside, but I really didn’t think it was gone.  I hit it high.”3 Brewers owner Bud Selig called the fans’ reaction the greatest he had ever seen at County Stadium.4

Nineteen days earlier, on July 8 against Detroit, Ben Oglivie had become the first Brewer to hit three homers in a game. On this night Cecil Cooper matched Oglivie’s production with three of his own, including the walk-off.

Besides the sources mentioned in the notes, the author consulted BaseballReference.com, SABR.org, and Retrosheet.org.