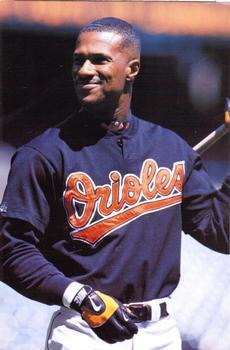 When healthy, Eric Davis possessed a rare combination of power and speed, but he could never stay completely healthy in his career. Injuries and inconsistent performance limited Davis to 113 games in his first two seasons with the Cincinnati Reds. But in the next five seasons, 1986 to 1990, Davis hammered 148 homers and swiped 207 bases, despite averaging just 131 games a year because of various injuries. In May 1987, Davis became the first player in the National League to hit three grand slams in one month. It tied a major-league record.1 He hit 37 homers and stole 50 bases in 129 games during that season, becoming the first player to hit 30 homers and steal 50 bases in a season.2

Davis’s misfortune continued in the 1990 World Series. He hit a two-run homer against Oakland ace Dave Stewart in his first at-bat in the first inning of Game One, leading the Reds to a 7-0 win. But in the final game of the Reds’ four-game sweep, he suffered a lacerated kidney while diving for a ball in the outfield; after collapsing in the dugout later, he was taken to the hospital.

After struggling through four injury-plagued years—which included a broken collarbone, shoulder surgery, and surgery for a herniated disc in his neck—Davis did not play in 1995.

He made a comeback with the Reds in 1996, hitting 26 homers with 83 RBIs in 129 games—but for the 1997 season moved to Baltimore, where he would face the biggest challenge of his career.

Davis was hitting .302 on May 25 when he was forced from the lineup by a stomach issue—which turned out to be colon cancer. After surgery on June 13 to remove a “baseball-sized” tumor, he underwent treatment and made an inspirational return in September, playing in eight games, and helping the Orioles reach the ALCS.

After the season, Davis won the Roberto Clemente Award, given annually to “the player who best represents the game of baseball through extraordinary character, community involvement, philanthropy and positive contributions, both on and off the field.”3 He also received the Fred Hutchinson Award, “created in 1965 in honor of the late Fred Hutchinson, the courageous and inspirational former Major League Baseball player and manager, who died of cancer one year earlier at the age of 45”4; and the Tony Conigliaro Award, given each year by the Red Sox to a major-league player “who has overcome adversity through the spirit, determination and courage that were trademarks of Tony C.”5

The Orioles were as hot as Davis—they entered the game having won 16 of 19 since the break to push their record to 54-53 and move into third place in the AL East. They were eight games behind Boston in the wild-card race.7 Detroit was stumbling along in last place in the AL Central with a record of 44-61; they had lost seven of their last nine.

A crowd of 22,915 was on hand to see the Thursday afternoon matchup between two left-handers—37-year-old veteran Jimmy Key and 25-year-old Justin Thompson. Key was 4-3 with a 4.06 ERA; he was making his first start since May 20 after recovering from an inflamed rotator cuff.8 Thompson was 9-8 with a 3.67 ERA in 23 starts.

Davis put Baltimore on the board early. With two outs in the first, he drove a full-count pitch deep down the right-field line into the upper deck for a solo homer. The blow extended his hitting streak to 17 games, matching his career high, set in 1986.9 (Davis’s streak would reach 30 games before ending in Cleveland on August 16.)

Key struggled in his first game back. With one out in the first he walked Joe Randa, gave up a single to Bobby Higginson, and walked Tony Clark to fill the bases. But he struck out Damion Easley and got Geronimo Berroa to ground out to end the threat.

The Orioles got to Thompson again in the second. Cal Ripken Jr.10 doubled with one out and Chris Hoiles was hit by a pitch. Both scored when Jeffrey Hammonds tripled to center. Hammonds scored when left-fielder Luis Gonzalez dropped Mike Bordick’s pop fly for an error. The Orioles led 4-0.

In the second, Key found himself in another jam. Gonzalez walked and Deivi Cruz reached on an error by Bordick at shortstop. One out later, Brian Hunter walked to load the bases. But the veteran escaped unscathed again, getting Randa to force Gonzalez at the plate and Higginson to fly out to center.

But Key’s luck ran out in the third. With one out, Easley singled and scored when Berroa tripled to center. Gonzalez followed with a double to left to make the score 4-2. One out later, Paul Bako singled in Gonzalez.

“Even though I got out of the first two innings, obviously it wasn’t good, and it caught up with me in the third,” Key said afterward. “I didn’t throw good. You can blame it on a lot of things. The ball was up all day and I couldn’t get it down. I was at a loss trying to find a way.”11

After Thompson worked around Ripken’s leadoff single in the fourth, Pete Smith replaced Key in the bottom of the inning. With one out, Higginson doubled and Easley’s two-out single tied the score, 4-4. Easley stole second and third but Berroa flied out to end the inning.

Thompson survived a leadoff single in the fifth and two walks in the sixth while Smith set down the next six Tigers.

In relief of Thompson in the seventh, Detroit brought in hard-throwing rookie Matt Anderson; he had allowed just one run in 15⅓ innings so far in the season. But B.J. Surhoff drew a one-out walk and Davis connected on a 1-and-1 fastball for a homer deep down the line in left.

Davis briefly hesitated before leaving the batter’s box and did a “two-hop skip”12 before trotting around the bases.13 Asked about it after the game, he said with a laugh, “It was a home run. I get emotional just like anyone else who hits a home run in a big situation. We had a lead. We lost the lead. And I hit a home run that put us on top. It came off a guy they say throws 100. You’ve got to be pumped for that.14

Anderson said, “I guess the pitch was up. I knew it was gone. It just wasn’t a good pitch.”15

“I didn’t even watch it. I said, ‘That’s gone,’” said Baltimore manager Ray Miller. “When you are on ground level, the ball makes a real loud sound when he hits it.”16

Regarding his comeback, Davis remarked, “I’m not trying to explain it. I’m just riding the wave. I feel blessed to come back from all the things I’ve been through and right now I’m just having fun.17

“Getting the cancer out of my body was the most important thing,” Davis continued. “I didn’t think about whether I was going to come back this year or come back last year. When I did come back it was just a matter of me being able to sustain my stamina. After taking chemo for 36 weeks, that was the only thing I was concerned about.”18

The Tigers threatened against reliever Alan Mills in the seventh, but he was erased when Berroa lined into a double play.

Anderson pitched a perfect eighth. Veteran Jesse Orosco set the Tigers down in the bottom of the eighth. It was the 1,002nd career appearance for the 41-year-old lefty—tying him with Goose Gossage for fifth place on the career list20—and his 998th relief appearance.21

The Orioles went down in order against Sean Runyan in the ninth before Armando Benitez picked up his 15th save with a perfect ninth.

Baltimore finished with a 79-83 record in fourth place in the AL East, 35 games behind the Yankees, who won 114 games. Detroit never escaped the cellar in the AL Central; the Tigers finished 65-97, 24 games back of the first-place Indians.

This game was the ninth of 10 games that the author and his father attended as part of a Jay Buckley baseball tour. The 10-day trip included games in Milwaukee (doubleheader), Pittsburgh, Baltimore, New York (Yankees), Boston, Montreal, Toronto, Detroit, and Chicago (Cubs). Also included was a day at the Baseball Hall of Fame in Cooperstown, a tailgate party at County Stadium, and free time for shopping and sightseeing in Baltimore, Boston, Montreal, and Toronto.

The author explored Tiger Stadium before the game and moved about during the game, watching from different vantage points of the old park—the upper deck above first base, the first row of the upper deck behind home plate, and from the distant center-field bleachers. This was his only game at Tiger Stadium. 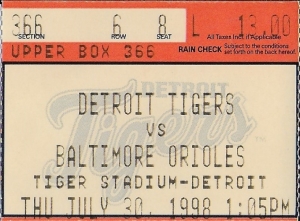 1 The final grand slam on May 30 was his 19th of the season, setting a National League record for home runs before the end of May. Dan Hafner, “National League Roundup: Davis Hits a Grand Slam, Breaks Records,” Los Angeles Times, May 31, 1987.

2 In 1990, Barry Bonds joined Davis by hitting 33 homers and stealing 52 bases in 151 games. No player has achieved this combination of power and speed since.

6 Davis was named the major-league Comeback Player of the Year.