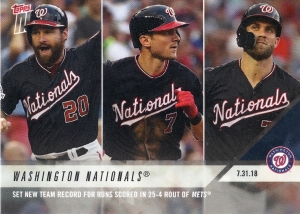 It was a laugher. Paul Dickson defined that baseball term as “a game with a lopsided score; a rout; an easy win.”1 Indeed. On this day with the excitement of Washington’s All-Star Game festivities fresh in the memory, attention turned first to the nonwaiver trading deadline, three hours before first pitch. Would the Nationals be buyers, sellers, or something in between? While the answer was unclear, the disappointment in the current Nationals season was in sharp focus.

As favorites to win the National League East Division, their 52-53 record put them in third place, five games behind the second-place Atlanta Braves and 5½ games behind the division-leading Philadelphia Phillies. They returned home for a critical 10-game homestand after dropping their last two road games to the last-place Miami Marlins.

General manager Mike Rizzo made one controversial move before the trading deadline. Relief pitcher Brandon Kintzler was traded to the Chicago Cubs for Single-A pitcher Jhon Romero. Some reporting suggested that Kintzler had been a negative influence in the clubhouse (an assertion he denied), and was traded for that reason.2 Others suggested that there was a significant financial incentive, savings of $6.7 million through the 2019 season, in moving Kintzler’s contract at the 2018 deadline.3 Washington Post reporter Chelsea Janes later reported that Rizzo “insisted the deal was about payroll, and he continues to do so.”4 Now, it was time for some baseball.

To open the homestand, the Nationals called upon Tanner Roark (4-12, 4.55 ERA) to take the mound. Roark was having a disappointing season given that his career record stood at 55-39 on Opening Day, but there were some encouraging signs of late. In his most recent start, at Milwaukee on July 25, Roark pitched an eight-inning, three-hit, no-runs gem against the Brewers in a 7-3 win. Before that he hadn’t won a game since early June, losing six of seven starts. Steven Matz (5-8, 3.79 ERA) took the mound for the Mets. Since 2016, Matz had made three starts for the Mets at Nationals Park, pitching 20 innings without yielding an earned run.5 That streak would not last for long, 16 pitches to be exact.

In the bottom of the first inning, the Nationals sent 12 players to bat and scored seven earned runs on eight hits to chase Matz after just 32 pitches, replaced by Jacob Rhame to get the final out. Ryan Zimmerman highlighted the inning with a single scoring Bryce Harper with the second run. Zimmerman became the all-time franchise leader in hits (1,695) ahead of Montréal Expos third baseman Tim Wallach, adding to his records for home runs, RBIs, and doubles.6 Nationals fans became delirious when Roark, batting .167, cleared the bases with a double to deep left-center for three more runs.7 In the bottom of the second inning, Daniel Murphy hit the first of his two home runs in the game for a 10-0 Nationals lead. In fact, before the inning was over, every Nationals starter had at least one hit, an important ingredient that helped cook this blowout game. Murphy’s second home run came in the bottom of the third inning, scoring Anthony Rendon and Bryce Harper, for a 13-0 lead.

In the bottom of the fourth inning, the onslaught continued against Mets reliever Tim Peterson. Rendon walked and Harper doubled him in. When Zimmerman homered to right-center, the Nationals’ lead grew to 16-0. The Nationals treated the next Mets reliever, Tyler Bashlor, just as badly in the bottom of the fifth inning. Bashlor yielded a walk to Michael A. Taylor, a single to center by Roark, and a walk to Trea Turner to load the bases. Rendon’s bases-clearing double to deep right-center made the score 19-0. In those same five innings, Roark yielded no walks and only three harmless hits — a double by Wilmer Flores in the first, a single by Kevin Plawecki in the third, and a single by Austin Jackson in the fifth.

In fact, when Roark departed after an efficient, 94-pitch, seven-inning outing, the only blemish was Mets rookie Jeff McNeil’s first major-league home run. The homer hit the façade above the Nationals bullpen down the right-field line, bounced back onto the field, and came back to Roark. In a gesture of sportsmanship and baseball protocol, Roark threw that ball to McNeil just after he had touched home plate.

It was the top of the eighth inning with the Nationals leading 19-1, Wander Suero on the mound, and the Mets at bat. The Mets TV broadcast team, — Gary Cohen, Ron Darling, and Keith Hernandez — wondered how they were going to entertain their viewers. Cohen announced, “We are going to unveil another edition of what we like to call Media Guide Musings.”8 Taking turns, they started on page 420 of the Mets media guide. Ignoring the action on the field, they started with Game One of the 1969 NLCS against the Atlanta Braves and finished the story time in six minutes with the Mets’ World Series-clinching win against the Baltimore Orioles. No doubt, a brighter time for Mets fans.

When Mets infielder Jose Reyes came in to pitch the bottom of the eighth inning behind by 18 runs, no one should have been particularly surprised. In an ever-growing trend, major-league baseball had already moved well past the 2017 record of 32 pitching appearances by position players.9 The reasoning seems obvious to many observers. Even eight-man bullpens are being heavily taxed. In 2017 starting pitchers averaged only 5½ innings per outing.10 When you are losing by 18 runs, save your bullpen for another day.

Reyes retired the first batter, Ryan Zimmerman, on a warning-track fly ball to deep right field, but Reyes’ fortune was temporary. He yielded six runs on two walks and five hits, including home runs by Matt Adams and Mark Reynolds, before Zimmerman came up for the second time in the inning, not wanting to make two outs in one inning under these circumstances. Reyes hit him in the left leg with a 54-mph curveball. A smiling and joking Zimmerman faked a charge to the mound, a moment of levity rarely seen in a baseball game.11 Juan Soto ended the inning by flying out to left field on Reyes’ 48th pitch of the inning and the Nationals led 25-1.

The bizarre continued in the top of the ninth after Shawn Kelley came in to pitch for the Nationals. He yielded a double to Michael Conforto and a single to Reyes before retiring McNeil on a run-scoring groundout. Austin Jackson followed with a two-run home run to left-center to cut the lead to 25-4. Kelley immediately slammed his glove into the ground and glared into the Nationals dugout before play resumed for the final batters ending the game.

With whom was Kelley more frustrated? Had he embarrassed the Nationals and manager Dave Martinez by his actions? Apparently, he also grew frustrated when home-plate umpire Adrian Johnson implored him to work more quickly, while second-base umpire Tripp Gibson simultaneously told him to slow down or be called for a balk.12 By the next day, for whatever the real reason, Nationals GM Mike Rizzo designated Kelley for assignment and eventually traded him to the Oakland Athletics.13

Games with a lopsided score like this one invariably set records and include unusual occurrences. This game was no exception. In addition to a new team record, the Nationals scored more runs by a team without a designated hitter since August 18, 1995, when the Chicago Cubs beat the Colorado Rockies 26-7. The Nationals were the first team without a designated hitter to have all nine starters score multiple runs since May 24, 1936, when the New York Yankees beat the Philadelphia Athletics 25-2.14

For the Mets, a consolation in an otherwise forgettable season came two weeks later when they routed the Phillies 24-4 in record-setting fashion, forcing the Phillies to use two position players as pitchers, Roman Quinn and Scott Kingery.15

Baseball fans have heard that “hitting is contagious,” an old baseball axiom borne out by substantial research.16 Surely it was uttered on numerous occasions on this night at Nationals Park. Was the game a momentum builder for a Nationals comeback in the National League East standings? They had already won their share of laughers, 15-2, 17-7, 18-4. On this crucial homestand, they won six of the first seven games against the Mets, Reds, and Braves to improve their record to 58-54. Any momentum quickly faded. By the end of August, their record had slipped to 67-68 and additional trades of free agents-to-be were completed.17

The Nationals finished the season in second place, eight games behind the division-winning Braves. Their poor performance in one-run games, 18-24, reflected the disappointing outcome.18 Would a greater emphasis on “small ball”19 be part of the solution for next season? The look forward to 2019 was on in earnest.

In addition to the sources cited in the Notes, the author accessed Baseball-Reference.com for box scores/play-by-play information and other data, as well as Retrosheet.org.

5 Ryan Wormeli, “Here Are Some of the Craziest Stats from the Nationals’ 25-4 Blowout Win,” NBCSports.com, July 31, 2018, accessed August 14, 2018, nbcsports.com/washington/nationals/here-are-some-craziest-stats-nationals-25-4-blowout-win.

7 From his seat in Section 208, it became apparent to the author at that moment in the game that keeping a legible scorecard was going to be a significant challenge.

9 Mike Axisa, “Why Position Players Are Pitching at a Record Pace So Far During the 2018 MLB Season,” CBSSports.com, July 24, 2018, accessed August 9, 2018, cbssports.com/mlb/news/why-position-players-are-pitching-at-a-record-pace-so-far-during-the-2018-mlb-season/.

13 Shawn Kelley was traded on August 5, 2018, with cash considerations to the Oakland Athletics for international bonus slot money.

15 Alysha Tsuji, “Mets 24-4 Win Over Phillies Was Comically Historic,” USAToday.com, August 16, 2018, accessed August 17, 2018, ftw.usatoday.com/2018/08/new-york-mets-24-4-win-phillies-historic-25-4-loss-nationals-same-season/amp. The last time a team scored 24-plus runs and allowed 24-plus runs in the same season was in 1894, done by the Boston Beaneaters, Chicago Colts, Philadelphia Phillies, and Pittsburgh Pirates.

19 Dickson, 795. Synonym of little ball — “a style of offensive play that relies less on home runs than on execution of basic fundamentals such as sacrifice hits, squeeze bunts, hit-and-run plays, advancing or hitting behind the runner, pickoffs, double steals, infield hits, taking advantage of walks and errors, and putting the ball in play.”