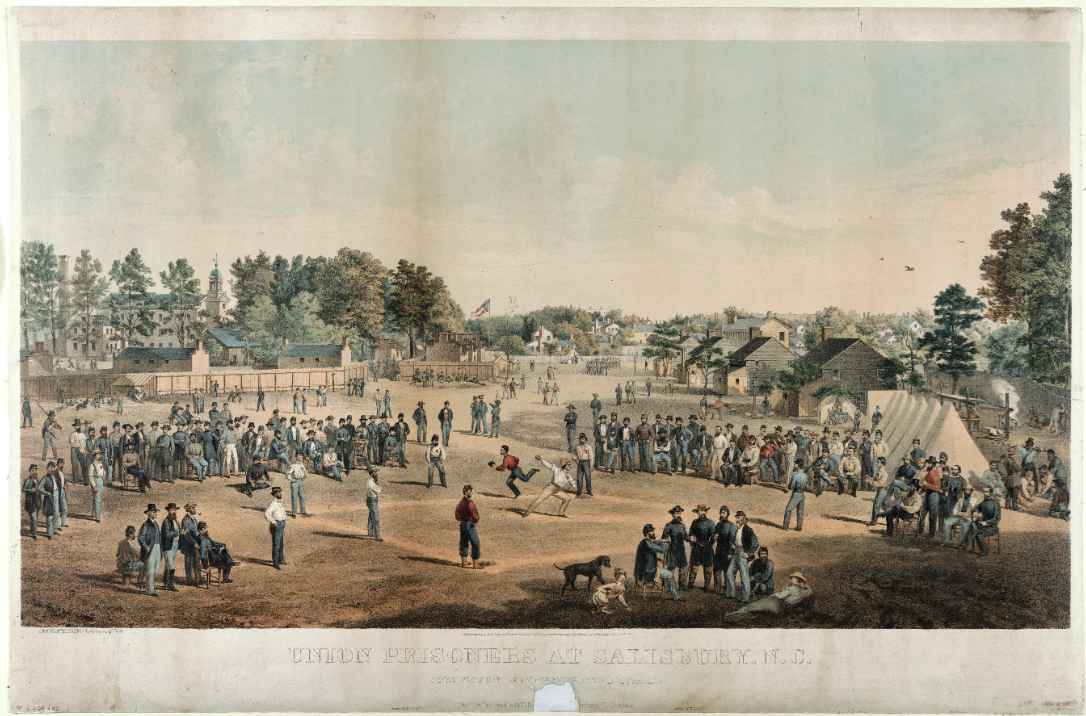 The ballfield was surrounded by stately oak trees, sweet-water wells, and handsome brick buildings, and lined by a wooden fence. The weather was mild when the inmates took to the playing field on the Fourth of July in 1862. Otto Boetticher was there. A 45-year-old military artist and lithographer originally from Prussia, he operated a studio in New York City before enlisting in the 68th New York Volunteers at the start of the Civil War in 1861.

Boetticher, a captain, was captured and spent time in Libby prison in Richmond, Virginia, before he was shipped to the Salisbury Prison in North Carolina in the summer of 1862. It is his print “drawn from nature” and published by Sarony, Major, and Knapp in color in 1863 that captured life in the prison at Salisbury and the baseball games that were played in the pastoral surroundings for a few brief seasons before the prison became unbearable.1

For months Salisbury was the “most endurable prison,” with only 600 inmates who were allowed to “exercise in the open air.” They were comparatively well fed and treated kindly, recalled former inmate Willard W. Glazier in 1866.2 Before the great influx of prisoners arrived at Salisbury in October of 1864, the prison population remained consistently low. The old cotton factory rested on 16 acres and was renovated by the Confederate government in 1861 to house 2,500 inmates, deserters, civilian prisoners, and Negro prisoners of war. Men were allowed “liberty of the yard”3 and many of the captured soldiers enjoyed afternoon and evening games of baseball.

“Took a little walk in the evening and watched some of the officers play ball,” wrote 23-year-old prisoner Charles Gray, a Union Army doctor, in May 1862. Gray wrote frequently of the games in his diary. “A good state of cheerfulness, thanks to the open space is fairly prevailing.” “Ball play for those who like it and are able…”4

Gray and other observers watched the match games between the captured Union prisoners and other inmates. A soldier from Rhode Island, William Crossley, who arrived at Salisbury in March 1863, recalled a baseball game played by recently transferred prisoners from New Orleans and Tuscaloosa, Alabama:

And to-day the great game of baseball came off between the Orleanists and Tuscaloosans with apparently as much enjoyment to the Rebs as the Yanks, for they came in hundreds to see the sport, and I have seen more smiles to-day on their oblong faces than since I came to Rebeldom. … The game was a tie, eleven each but the factory fellows were skunked three times, and we but twice.”5

It can be surmised that the “factory” boys were possibly the Confederate guards from the factory-turned-prison or captured soldiers held in the prison barracks. By the time this game took place, Captain Boetticher had been exchanged for a Confederate captain in September of 1862.

On holidays during the Civil War, sport became a common diversion for soldiers as they attempted to forget the hardships, danger, boredom, and homesickness of wartime life. Accounts show that soldiers marched in St. Patrick’s Day parades, ran footraces on Thanksgiving, and held shooting and boxing matches. Regiments challenged each other to football and baseball games and snowball fights on Christmas — substituting sport for traditional holiday observances.

On July 4, 1862, at Salisbury prison there was music, a reading of the Declaration of Independence, sack races and footraces along with a greased-pig-catching contest and a baseball game.6 It is unclear if this is the game featured in Otto Boetticher’s rendering, although it is altogether possible. The image shows a well-worn, diamond-shaped playing field, hundreds of fans in the bucolic prison yard and prisoners who even appeared to don makeshift red uniforms!

Confederate Chaplain Adolphus Magnum, who visited Salisbury in 1862, wrote of the celebration on the Fourth of July to include a blindfolded wheelbarrow race and described a dress parade and ball play on the prison grounds:

… the officers among the prisoners came out and presented a truly beautiful scene in their recreation. A number of the younger and less dignified ran like schoolboys to the play ground and were soon joining in high glee in a game of ball. Others … sat down by side with the prison officials and witnessed the sport. 7

Salisbury prisoner Josephus Clarkson, a ship chandler’s apprentice from Boston, wrote of the impromptu ballgames that took place and of the lengthy debates over whether to play by town-ball rules (in which “plugging” or putting runners out by hitting them with the ball was allowed) or by the New York rules:

“Since many of the men were in a weakened condition, it was agreed to play the faster but less harsh New York rules which intrigued our guards. The game of baseball had been played much in the south, but many of them (the guards) had never seen the sport devised by Mr. Alexander Cartwright.” 8

It is unclear how long Clarkson spent at Salisbury but the inmates he described were failing in health. As the war dragged on, it was unlikely that the prison yard at Salisbury saw anything but deprivation. By 1864 the prison population had risen to more than 10,000 and hundreds of men died daily of starvation and illness. Most of Salisbury was burned to the ground when the war ended in 1865; a national cemetery is now close by.

After the war some historians promoted baseball as a healing tool to reinforce a new sense of union. A grand game of baseball was indeed played at Salisbury on July 4, 1862. It is unclear whether the game in Boetticher’s print was an illustration of this game or a composite of many he remembered while imprisoned there. The print does illustrate, however, that baseball was a uniting force for both armies during and long after the Civil War.