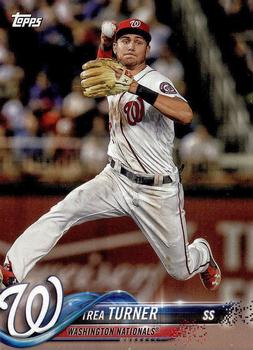 Sean Doolittle, the Washington Nationals closer, was sitting in the bullpen when, by the top of the fourth inning, the Nationals were losing 9-0 to the Miami Marlins. Some thoughts that could have been going through his (and the other relievers) mind:

“I feel sorry for Helly — he’s sick and he’s out there getting punished — along with his ERA.”1

“Nationals have never come back from nine runs down, but it’s baseball: Anything’s possible.”2

“I guess that closed-door team meeting isn’t having the desired effect.”3

Probably not among his thoughts:

“By the top of the ninth, I’ll be closing this game protecting a two-run lead.”

But yet, that’s exactly what happened: The Nationals came back from nine runs down for the first time in franchise history, and Doolittle closed out the game, ending a Nationals five-game losing streak.

None of this was a foregone conclusion, or even foreseeable, when Jeremy Hellickson (2-1, 2.62 ERA) took the mound for the Nationals (42-43, third in the NL East) on that sultry July evening. The visiting Marlins (36-52, last in the NL East) were in town for a four-game series.

The first inning didn’t go too badly for Hellickson. Derek Dietrich singled, advanced to second on Brian Anderson’s groundout, then to third on J.T. Realmuto’s fly to center. Although Hellickson walked Justin Bour, he might have been out of the inning had it not been for Anthony Rendon’s second error of the year: He fumbled the ball on what would have been the third out on Martín Prado’s grounder to third. Dietrich scored on that play. Rendon redeemed himself with a sprawling stop of Cameron Maybin’s grounder toward left: A quick throw to second ended the top half of the first with the score 1-0, Marlins. Pablo López (1-0, 3.00 ERA) induced three consecutive groundouts in the bottom of the first. This was only his second major-league start.

The top of the second didn’t start too badly: Miguel Rojas grounded out, Yadiel Rivera singled, and López was out on a foul bunt. But things went downhill from there: Dietrich singled again, then Hellickson hit Anderson with his second pitch to load the bases. Realmuto singled, scoring two; Bour singled, scoring another; then Prado’s first (and only) home run of the year bounced off the left-field foul pole, scoring three more. Maybin finally ended the rally by striking out, but the score was 7-0, Marlins. The Nationals got their first hit in the bottom of the second (a single by Matt Adams) but he was erased on a double play.

Hellickson kept Miami under control in the top of the third, allowing only a single to Rojas. The Nationals accomplished nothing in their half of the third. López’s pitch count was 39 to Hellickson’s 63.

The Marlins put up two more runs in the fourth. Anderson was out quickly, but Realmuto singled and Bour knocked him in with a homer into the visitors bullpen. Prado flied out, then Maybin ended the Marlins’ half-inning for the third time, this time by lining out to third. But the score was now 9-0, Marlins. The Nationals had come back once from eight down (the memorable “Dan Uggla Game”), but never from nine down.4

The Nationals finally scored in the bottom of the fourth when Trea Turner led off with his 10th home run, actually causing great excitement in the dugout, the bullpen, and in the stands.5 But it took only six more pitches for López to dispose of the next three Nationals.

Nationals manager Davey Martinez finally pulled Hellickson even though his pitch count was only 75. Jefry Rodríguez, making only his fourth major-league appearance, pitched a 1-2-3 fifth inning, getting two groundouts and striking out López (who was still looking for his first major-league hit).6

The Nationals got a significant rally going in the bottom of the fifth. Adams singled, Daniel Murphy walked, and Michael A. Taylor singled, loading the bases. After Pedro Severino struck out, López walked Adam Eaton, forcing in a run. Turner grounded to Bour near first, who threw to second for the force out. But Murphy scored because the Marlins were unable to turn two. With Turner on first and Taylor on third, Juan Soto doubled into center, allowing both Turner and Taylor to score while Soto stood celebrating on second. Rendon struck out, but the Nationals had come halfway back: 9-5, Marlins, at the end of five.

Shawn Kelley took over the pitching for the top of the sixth. He had a bit of a rough inning but ultimately no Marlins scored. After Dietrich struck out, Anderson doubled and Kelley hit Realmuto with a pitch. But he struck out Bour and got Prado to pop out to kill the rally.

Adam Conley took over the pitching for the bottom of the sixth. He had been an effective reliever for the Marlins, pitching 19 innings to a 1.42 ERA. This inning, however, was a disaster for his ERA: Neither his statistics nor his pitching fully recovered and he ended the season with a 4.09 ERA. Bryce Harper worked the count full and walked. Adams doubled on the first pitch, moving Harper to third. Murphy’s fly scored Harper and allowed Adams to make it to third, beating the throw in from Dietrich. Taylor and pinch-hitter Mark Reynolds both walked, then Wilmer Difo struck out, so the bases were loaded when Turner stepped to the plate to face a pitcher who had retired him in their previous seven meetings. Undeterred by history, he hit his second home run of the day — his first career grand slam, putting the Nationals ahead 10-9 and earning a curtain call from the fans. After Conley walked Soto, Marlins manager Don Mattingly replaced him with Drew Rucinski, who ended the inning by getting Rendon to line out.

Brandon Kintzler pitched a 1-2-3 top of the seventh for the Nationals. The Nationals were not done scoring: This inning they beat up Dillon Peters’ ERA.7 A Harper strikeout, an Adams single, a Murphy lineout, and a Taylor single put two on and two out for Spencer Kieboom. He singled, scoring Adams and sending Taylor to second. Brian Goodwin walked to load the bases, bringing Turner to the plate again. He didn’t hit another grand slam but he did single to score two more, giving him a career-high eight RBIs for the day. Soto singled to bring the score to 14-9, Nationals. Six batters after the second out, Peters finally got the third out on Rendon’s grounder.

The Marlins made it interesting in the top of the eighth. After Justin Miller allowed a double to Starlin Castro and walked Dietrich, Martinez brought in Kelvin Herrera, who promptly gave up a three-run homer to Anderson. But that was all for Miami: Herrera got a groundout and two strikeouts to end the visitors’ half of the eighth with the score 14-12, Nationals. In the bottom of the frame, Harper walked but was erased on a double play, then Murphy lined out to end the inning.

Given the score, it was no surprise that Doolittle, the Nationals closer, took the mound for the top of the ninth. Maybin singled on the first pitch. Rojas struck out, pinch-hitter Bryan Holaday flied out, Castro singled. That brought up Dietrich as the go-ahead run but Doolittle struck him out on three pitches to earn his 22nd save.

There was much celebrating the historic comeback win on the field and in the dugout, with hopes that it might spark a turnaround in the Nationals’ season. It didn’t,8 but for one memorable evening anything seemed possible. As for the Marlins, they ended the season where they were on July 5: last place in the NL East.

Among the records set:9

Turner’s eight RBIs tied for the most by any leadoff hitter since at least 1908, as he became the sixth player to drive in that many runs out of the top spot in the order.10

This matched the largest blown lead in Marlins history. Ten years earlier on July 4, 2008, the Marlins were up 13-4 over Colorado in the top of the fourth before the Rockies came back to win 18-17.

Matt Adams, in his first game back from the disabled list, picked up four hits to tie his career high. His previous four-hit game was also against the Marlins, on July 6, 2014.

Jeremey Hellickson was the second Nationals pitcher to give up nine runs and not be charged with a loss. A.J. Cole was the first, in the “Dan Uggla Game” on April 28, 2015.11

1 The night before, after losing three games to the Red Sox while being outscored 18-7 in the series, the Nationals had held a team meeting. Mark Zuckerman, “Pitching Ill, Hellickson Rocked by Marlins,” MASNSports, July 5, 2018, masnsports.com/nationals-pastime/2018/07/pitching-ill-hellickson-rocked-by-marlins-nats-trail-9-1.html. Accessed February 13, 2019.

8 The Nationals finished 82-80, second in the NL East, and missed the postseason.