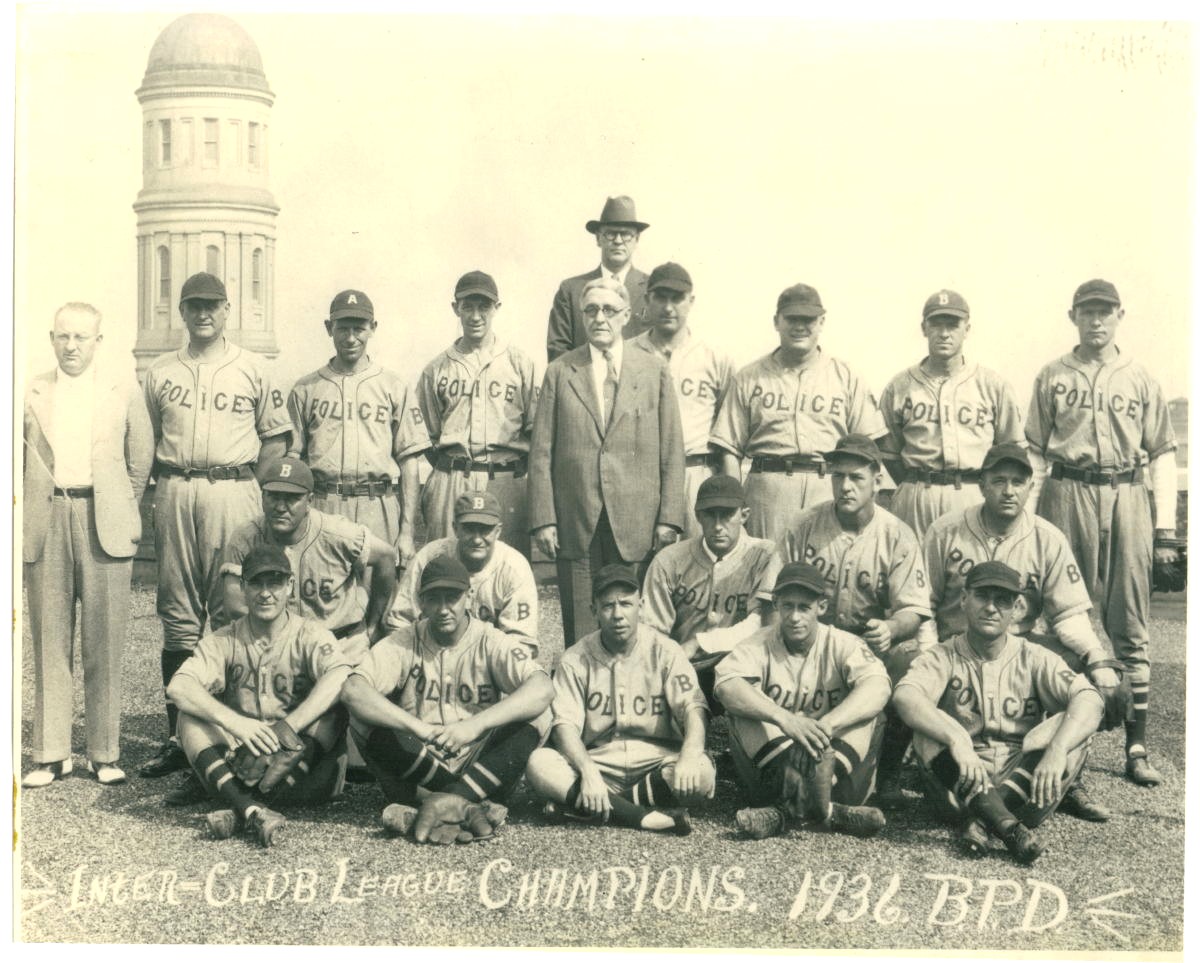 Baseball was played at the Olympics for the first time as a demonstration sport at St. Louis in 1904; very little information on this game is available. Further Olympic baseball exhibitions took place in 1912 and 1924. Hoping to make baseball a sanctioned medal event, former major leaguer Les Mann petitioned the Olympic Committee to allow him to form a team to play Japan at the 1936 Summer Games in Berlin. In addition to his title of general manager of the Olympic ballclub, Mann was the executive vice president of the American Baseball Congress as well as the dean of Max Carey’s baseball school in Miami. In November of 1934 the Olympic Committee accepted Mann’s offer.

In the fall of 1935, Mann and future Hall of Famer Max Carey took a group of college players, sponsored by Wheaties, to Japan for what turned out to be a successful 20-game exhibition tour. The following summer Mann began the selection process for the US Olympic baseball team. After tryouts around the country, Mann took his Olympic hopefuls to Baltimore in early July for the squad’s final workouts. Each player who made the team was required to put up $500 to cover his expenses.

The team practiced at Gibbons Field in the Irvington section of West Baltimore. These grounds, which are adjacent to Mount Saint Joseph High School, are now called Slentz Field. In order to give local players an opportunity to make the squad, nearly 60 of Baltimore’s best amateurs were asked to try out. Four teams were selected from this group, then matched up in a doubleheader at Bugle Field in East Baltimore. A dozen of the best players from those two games were placed on a team called the Pimlico All-Stars. On July 4 the Olympians played the All-Stars at the Pimlico Oval. Team USA won the contest 12-9, scoring five runs in the top of the ninth to secure the win. Baltimorean Bill Kidd, star backstop for the Chesapeake Baking Company, caught part of the game for the Olympians.

On July 7, the US Olympic baseball team went to Washington to play a fundraising game against the Quantico Marines at Griffith Stadium. Team USA came out on top 15-2 in front of several thousand patriotic supporters.

The next day the Olympians squared off against the Baltimore City Police Department baseball team at Bugle Field. The Police roster was made up almost entirely of former professional baseball players who left Organized Baseball to pursue a career in law enforcement. The manager of the police team, Polly Martin, chose Edward “Augie” Schroll as his starting pitcher. Schroll pitched for the Cambridge Canners in the Class D Eastern Shore League in 1922. The hard-throwing right-hander posted a 10-9 record with 146 strikeouts while leading the circuit in innings pitched (205). Team USA manager Harry Wolter countered with Eldred Brittsan from Wren, Iowa. Brittsan played two seasons in the minor leagues before joining the US Army in World War II. He was killed on January 28, 1945, while fighting with 80th Infantry Division in Luxembourg.

Mann’s charges took an early 1-0 lead when Grover Galvin drilled Schroll’s second pitch of the game over the right-center-field fence. Unfazed by the early long ball, Schroll retired the next three batters in order. The Police countered with four runs in the bottom of the first on two walks and four hits. Brittsan lasted two-thirds of the inning before being relieved by University of Oregon pitcher Bill Sayles. A tall right-hander, Sayles later pitched for three major-league teams.

From that point on the Police never relinquished the lead, eventually coming out on top 9-5. Schroll worked seven innings for the police, giving up four runs while walking three and fanning five. Bill Runge pitched the eighth and ninth, allowing one run on two hits. Runge was a 14-game winner for the Youngstown Buckeyes in the Class B Central League in 1932. Hard-throwing Fred Heringer from the University of Nebraska pitched the last four innings of the game for Team USA, holding the Police to one final run. Of Heringer, the Baltimore Sun wrote, “He is a right-hander with plenty of smoke and looked like the best hurler Mann has on his staff.”1

The Police held the Olympians to just six hits. Second baseman Les McNeese went 1-for-3 with a double. McNeese, who replaced Galvin at second base early in the game, was a standout player from the Fort Lauderdale, Florida, area. Shortstop Dow Wilson, from Dover City, Iowa, connected for a pair of singles. Iowa native Galvin, Hubert Shaw of Bowdoin College, Paul Amen from the University of Nebraska, and Don Hibbard from Western State Teachers College all had one hit. 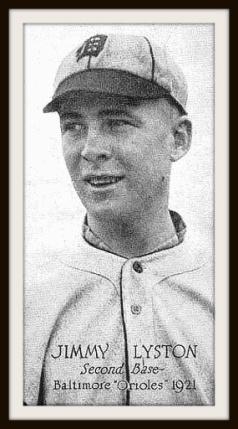 Police third baseman Jimmy Lyston and center fielder George Klemmick each contributed two hits for the victors. Lyston broke into professional baseball in 1921 with Jack Dunn’s Baltimore Orioles in the Double-A International League. Lyston was playing for Joe Cambria’s Hagerstown Hubs in the Class C Mid-Atlantic League in June of 1931 when he resigned to join the Baltimore police force.

Klemmick was a pitcher and batterymate of catcher Jimmie Foxx on the 1924 Easton Farmers in the Class D Eastern Shore League. Both were signed by the Philadelphia Athletics at the end of the season. On April 25, 1924, Klemmick had struck out 21 Severn batters while pitching for Polytechnic High School in Baltimore.

Schroll, who played the infield when he wasn’t on the mound, helped his cause with two safeties in three trips to the plate.

Henry Sherry, another member of the police squad, was a former pitcher-infielder-outfielder in the Class D Blue Ridge League. He and Runge pitched as the police team captured two pennants in 1936. The first was in the local Interclub League, where the Bluecoats finished with a record of 14-3. The second championship was earned in what was called the John Law Series, games played between police-department baseball teams from Baltimore, Washington, Alexandria, Virginia, Norfolk, Virginia, and the FBI. All the teams had players with professional baseball experience so this was always a hard-fought series.

Surprisingly, no Baltimoreans were chosen to play on the Olympic baseball team. Edwin Mumma from Sharpsburg, Maryland, worked out with Team USA during the practice sessions, but he didn’t make the trip to Berlin, presumably due to an injured ankle. The Baltimore Sun noted that the Olympic squad included five members of George Laing’s Penn Athletic Club. Baseball-Reference.com shows that four of the 21 members of the Olympic baseball squad were from Wolter’s Stanford team.

On July 15 the US Olympic delegation left New York for Germany aboard the steamer Manhattan. The Japanese were scheduled to play an exhibition game against Mann’s club in Berlin but they somewhat belatedly decided to withdraw from the competition. Japan did, however, send a group of athletes to Germany to compete in other Olympic sports. The reason for canceling the baseball game lies somewhere in the chilly relationship between Washington and Tokyo at this time. This rift was due to a variety of issues including recent upheaval in the Japanese government caused by an attempted coup, as well as the country’s harsh military policies in East Asia.

On the evening of August 12, the US team played an intrasquad demonstration game on an all-grass field inside a running track at the dimly lit Olympic Stadium in Berlin. The two teams, named the World Champions and the U.S Olympics, played seven innings with the Champions coming out on top, 6-5, on a walk-off homer by Les McNeese. The crowd was estimated to be anywhere from 90,000 to 125,000.

America’s national pastime made such a favorable impression on the Olympic directors that the sport was scheduled for inclusion at the 1940 Games in Tokyo. The Games were canceled because of World War II.

Baseball was played in single-game demonstrations again at the 1952, 1956, and 1964 Olympics. Still not a sanctioned medal event, the first Olympic baseball tournament was held in 1984, followed by a similar competition in 1988. Finally in 1992, baseball became an official Olympic medal sport. The sport’s tenure on the world stage would turn out to be short-lived. In 2005 the International Olympic Committee eliminated baseball and softball after the 2008 games in Beijing. As of 2016, the Olympic ban on both sports was still in effect.

Keenan, Jimmy. The Lystons: A Story of One Baltimore Family and Our National Pastime (Self-published 2009).