“You know what they say about Chicago. If you don’t like the weather, wait fifteen minutes.”1 As Warren Corbett noted in his SABR biography of Hall of Famer Ralph Kiner, the longtime New York Mets broadcaster became famous for his “verbal strikeouts.”2 Although this one of the many Ralph Kiner quotes3 was uttered after the temperature at Wrigley Field went from 103 degrees on one June day to 61 degrees the following day, it very well captures what happened in Chicago on this night.

Two major-league baseball games in the same city were going to be impacted by whatever mother nature had in store. The circumstances of the major-league schedule were unusual, with both Chicago teams playing at home. While the Cubs were playing the Cincinnati Reds in a night game at Wrigley Field on Chicago’s North Side, the White Sox were entertaining the Toronto Blue Jays at US Cellular Field on Chicago’s South Side.

The Cincinnati Reds, who came to town having won nine consecutive games at Wrigley Field, were pitching Homer Bailey (3-4, 3.84 ERA). Bailey had beaten the Cubs 5-2 on their May visit to Cincinnati’s Great American Ball Park. Scott Feldman(5-4, 2.83 ERA) went to the mound for the Cubs looking to atone for a loss on that same May visit to Cincinnati. Feldman was in his first year with the Cubs after signing a one-year, $6 million free-agent contract in November 2012.

As fog began to roll through Wrigley during the first inning, Cincinnati got off to a 1-0 lead. Shin-Soo Choo was hit by a pitch for the 18th time this season.4Joey Votto’s groundout followed Zack Cozart’s fielder’s choice and the latter scored on Brandon Phillips’s single to right, his first RBI of the evening. The fog remained dense over the first few innings, nearly covering the playing field. From a seat behind home plate, one could not see the rooftop seats on Waveland and Sheffield Avenues that outline the view beyond the outfield stands of Wrigley Field. “From the press box, there were points in the game when the outfielders couldn’t be seen through the fog.”5 Surely, long-standing Chicago sports fans among the crowd of 28,052 couldn’t help but think of the Fog Bowl involving their beloved Bears.

On December 31, 1988, the Chicago Bears played the Philadelphia Eagles in a National Football League (NFL) playoff game at Chicago’s Soldier Field. A dense fog rolled in during the second quarter of the Bears’ 20-12 victory. Few of the 65,534 fans saw much of the final 32 minutes since the fog was so thick at times that visibility dropped below 20 yards.6“There was no reason for the game to be suspended,” said Eagles coach Buddy Ryan. “If this was a baseball game, maybe. But this is football, and you have to play the game.”7

In the third inning at fog-engulfed Wrigley, Brandon Phillips was still seeing the ball well. After three singles in the inning, he hit a grand slam to deep left field off Scott Feldman. Brandon Phillips five, Cubs nothing. With his 10th home run and fifth career grand slam, Phillips tied Joe Morgan for the most home runs by a Reds second baseman (152) and passed him for the RBI record (615).8

Meanwhile, dense fog also shrouded US Cellular Field, where the power hitters were enjoying “Fogball in Chicago”9 at the plate. José Bautista and Adam Dunn each homered twice. Bautista’s bat did the talking after José was thrown out of the previous day’s game in Toronto against the Texas Rangers. After he struck out on three pitches in the ninth inning, an argument with home-plate umpire Gary Darling led to his exit.10 Both of Dunn’s homers were prodigious blasts, over 440 feet.11 The first one, his 15th of the season, came in the bottom of the third inning just a few batters before the umpires decided that the fog was too dense to continue, resulting in a 1 hour 10 minute delay. Eventually, the White Sox prevailed 10-6 as the hour approached midnight.

Back at Wrigley, Brandon Phillips even helped the Cubs finally score their first run in the sixth inning. Luis Valbuena opened with a double to right field. With two outs, Nate Schierholtz singled weakly to second base and a throwing error by Phillips allowed Valbuena to score. The Reds got that run back in the eighth inning. After Zack Cozart singled and Joey Votto walked, a wild pitch by Blake Parker advanced Cozart to third. Phillips then recorded his career-high sixth RBI on a groundout to second base for a 6-1 Reds lead.

When Homer Bailey retired the side in the eighth inning, his solid night on the mound was done — four hits, one unearned run, eight strikeouts, and 120 pitches, of which 90 were strikes. Alfredo Simon came in to pitch the ninth and the Cubs made things interesting. After Alfonso Sorianosingled and Dioner Navarro walked, Starlin Castro doubled in one run. Navarro was out at home on a subsequent fielder’s choice grounder to third baseman Jack Hannahan and Simon held on for the 6-2 Reds victory.

What was it like to be in the batter’s box on this foggy night? “When I went up for the first at-bat, I saw the ball at the last moment,” Cubs shortstop Starlin Castro said. “Everybody said the same. You could only see a little bit of white coming to home plate. It wasn’t easy.”12 Brandon Phillips disagreed. “The fog, it was coming in and out,” Phillips said. “For me to hit the ball the way I did today, I think the fog wasn’t [there] when I was up to bat. Maybe it was when everyone else was up to bat.”13

With the loss, the Cubs remained in a virtual tie, fourth place 15 games behind the division-leading St. Louis Cardinals. They were going nowhere fast, so it seemed. They only managed to beat the Reds once at Wrigley Field for the remainder of the season. By July 2, they had traded Scott Feldman to the Baltimore Orioles with Steve Clevenger for Jake Arrieta, Pedro Strop, and cash. At season’s end they were 66-99, 31 games behind the division-winning Cardinals. But on this same foggy night, something else was happening in the Florida State League. Top prospect Javier Baez hit four home runs for Class A Daytona against Fort Myers, only the second time that had been accomplished in league history.14 Other prospects like recent draft pick Kris Bryant were moving up. The Cubs were getting ready for something special in a future baseball season to be determined! 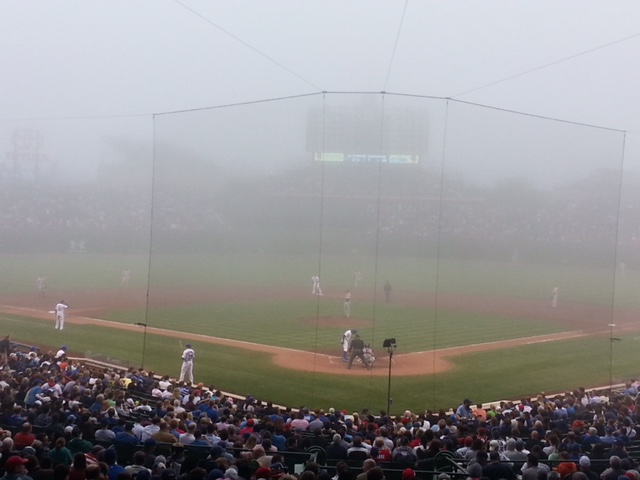 I was in Chicago with two business colleagues so a first visit to the venerable home of the Cubs was in order. In the third inning from our seats behind home plate in Section 220, we could barely see the Cubs left fielder, Alfonso Soriano, through the fog but not much beyond.15 As Brandon Phillips sailed a 1-and-1 pitch to deep left field, the trick was to watch Soriano as closely as possible. He did not turn, he did not move and the ball disappeared into the fog. I really don’t believe that Soriano ever saw the ball. Just imagine what couldn’t be seen from the rooftop seats outside Wrigley Field on Waveland Avenue. After the second inning, Soriano’s counterpart, Reds left fielder Xavier Paul, spoke with an umpire about field visibility. Paul had caught a fly ball in the first inning and Reds manager Dusty Baker noted “When that ball went up to left fielder Xavier Paul in the first inning, we all lost it.”16 The umpiring crew huddled, but the game continued without interruption.17 I rest my case!

The author accessed Baseball-Reference.com for box scores/play-by-play information (baseball-reference.com/boxes/CHN/CHN201306100.shtml) and other data, as well as Retrosheet.org (retrosheet.org/boxesetc/2013/B06100CHN2013.htm).

15 Photograph taken during the early innings of the game and used for this essay with the consent of the author.