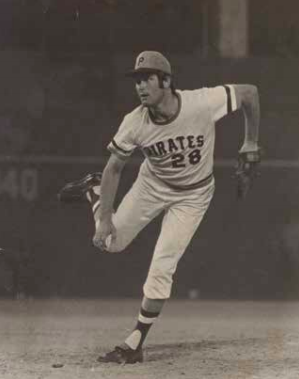 Steve Blass was arguably the best pitcher on the Pittsburgh Pirates during the 1970, 1971, and 1972 seasons, when the Pirates won the National League East each year. In 1971, Blass helped the Pirates to their World Series victory over the Baltimore Orioles by pitching complete-game victories in Games Three and Seven, allowing only 11 baserunners and two earned runs in the 18 innings he pitched. In 1972, Blass pitched in the All-Star Game, won a career-high 19 games with an ERA of 2.49, and finished second in the voting for the Cy Young Award to the Phillies’ Steve Carlton.

It looked as if 1973 would be another great year for the Pirates, and that Blass would continue to be the ace of the Pirates staff. But instead, 1973 was a bad year in many ways for the Pirates. First, they lost Roberto Clemente, their leader on and off the field, to a plane crash on New Year’s Eve 1972. And although they still had a good team, they finished with a record of 80-82, their first season under .500 since 1968. But as bad as the season was for the Pirates as a team, it was a nightmare for 31-year-old right-handed hurler Steve Blass. Blass’s performance on June 13, 1973, encapsulated all that went wrong for him that season, and which led to the end of his playing career.

Blass started the Opening Day game for the Pirates against the St. Louis Cardinals on April 6 at Three Rivers Stadium, and clearly was not sharp. He gave up five earned runs in five innings on five hits, four walks, and a hit batsman. What was most uncharacteristic for Blass was his wildness. In his previous seven seasons, he had averaged just under 3.0 walks per nine innings. It was his wildness against St. Louis that foretold Blass’s fate in the 1973 season.

Blass’s second outing of the season, on April 17 against the Cardinals again, was respectable. In the game at Busch Stadium, he pitched eight innings and gave up three earned runs, but again his walk total – five – was uncharacteristically high. This turned out to be the last game Blass started until August in which he gave up fewer than four earned runs. Clearly Pirates manager Bill Virdon continued to hope that Blass would return to the form he exhibited the season before. He did not have any arm issues or injuries in 1973, or in his entire career, and so the Pirates just hoped that Blass would work things out.1

Blass stayed in the starting rotation through June 11, when he gave up five earned runs in 3⅓ innings against the Atlanta Braves. After this outing, Blass’s ERA stood at 8.50 for the season, and he was walking 6.6 batters per nine innings. Blass agreed to go to the bullpen and try to work out of his troubles. He received his first call from the bullpen on June 13, in what ended up as one of the worst games in Pirates history.

The game started with the Pirates going down in order in the top of the first. The Braves scored two runs in the bottom of the inning on a wild pitch by Ellis and a run-scoring single by Dusty Baker. In the third the Pirates made a little noise, with leadoff singles by Richie Hebner and Milt May, but both were stranded as Reed worked his way out of the inning. The Braves also had two baserunners in the third, but failed to score.

The fourth inning featured a lot of offense, starting with Richie Hebner smacking a three-run home run, his sixth of the year, scoring Al Oliver and Bob Robertson and giving the Pirates a 3-2 lead. The Braves came back strong in the bottom of the inning with consecutive singles by Ralph Garr, Davey Johnson, Marty Perez, and pitcher Reed, which scored two runs. Reed and Perez moved up on a groundout, and Dick Dietz was intentionally walked to load the bases. Ramon Hernandez relieved Dock Ellis, and the veteran left-hander gave up a grand slam to lefty Darrell Evans, the slugging third baseman’s 14th homer of the season. At the end of the fourth, the Braves led 8-3.

The Pirates went down quietly in the top of the fifth inning, and Steve Blass came in to pitch the bottom of the inning. Since he had no physical concerns that would account for his poor performance all season, the Braves thought he was over-anxious and otherwise thinking too much when on the mound. The idea behind bringing him into the game in this situation was to give him an outing with little pressure, as the Pirates were already well behind in the game.2 Unfortunately for Blass, this outing proved to be perhaps the worst in his life.

Blass began by walking Ralph Garr, allowing him to steal second, uncorking a wild pitch allowing him to advance to third, walking Davey Johnson, and allowing a run-scoring single to Marty Perez to make the score 9-3. Blass managed to get out of the inning on a flyball and two grounders, but he suffered a meltdown in the sixth. He began the inning by walking Darrell Evans and then throwing a wild pitch. He walked Mike Lum and allowed a run-scoring single to Dusty Baker. After getting Ralph Garr to ground out to first base, he gave up a run-scoring infield single to Davey Johnson, walked Marty Perez, gave up a two-run single to opposing pitcher Reed, uncorked another wild pitch, walked Johnny Oates, and gave up a two-run single to Frank Tepedino, which swelled the rout to 15-3. Having gotten only one out, Blass was replaced by Bob Johnson, who got the Pirates out of the inning on a 4-6-3 double play.

In his disastrous appearance of 1⅓ innings, Blass allowed seven earned runs on five hits (all singles), six walks, and three wild pitches. Blass called it “the worst experience of my baseball life.”3 Johnson went on to finish the game, giving up three more runs in the eighth inning. The final score was 18-3. Despite the many baserunners, the game was played in a relatively quick 2 hours and 37 minutes. The 18 runs were the most runs allowed by the Pirates in a game since 1955.

Blass stayed with the Pirates for the remainder of the season, starting six more games and pitching in relief in three others, but he never returned to his old form. He pitched in one game for the Pirates in 1974, his final game in the majors. He pitched in the minor leagues for the remainder of the 1974 season in a futile attempt to get back to the majors. He retired from baseball in 1975. A profile of Blass by Roger Angell in The New Yorker in 1975 and Blass’s 2012 autobiography, A Pirate for Life, provide extensive details and possible explanations for what Blass went through, and what has become known as Steve Blass disease, in which a pitcher suddenly loses control of his pitches, and never gains it back.4

The author relied on Baseball-Reference.com and Retrosheet.org for game details.