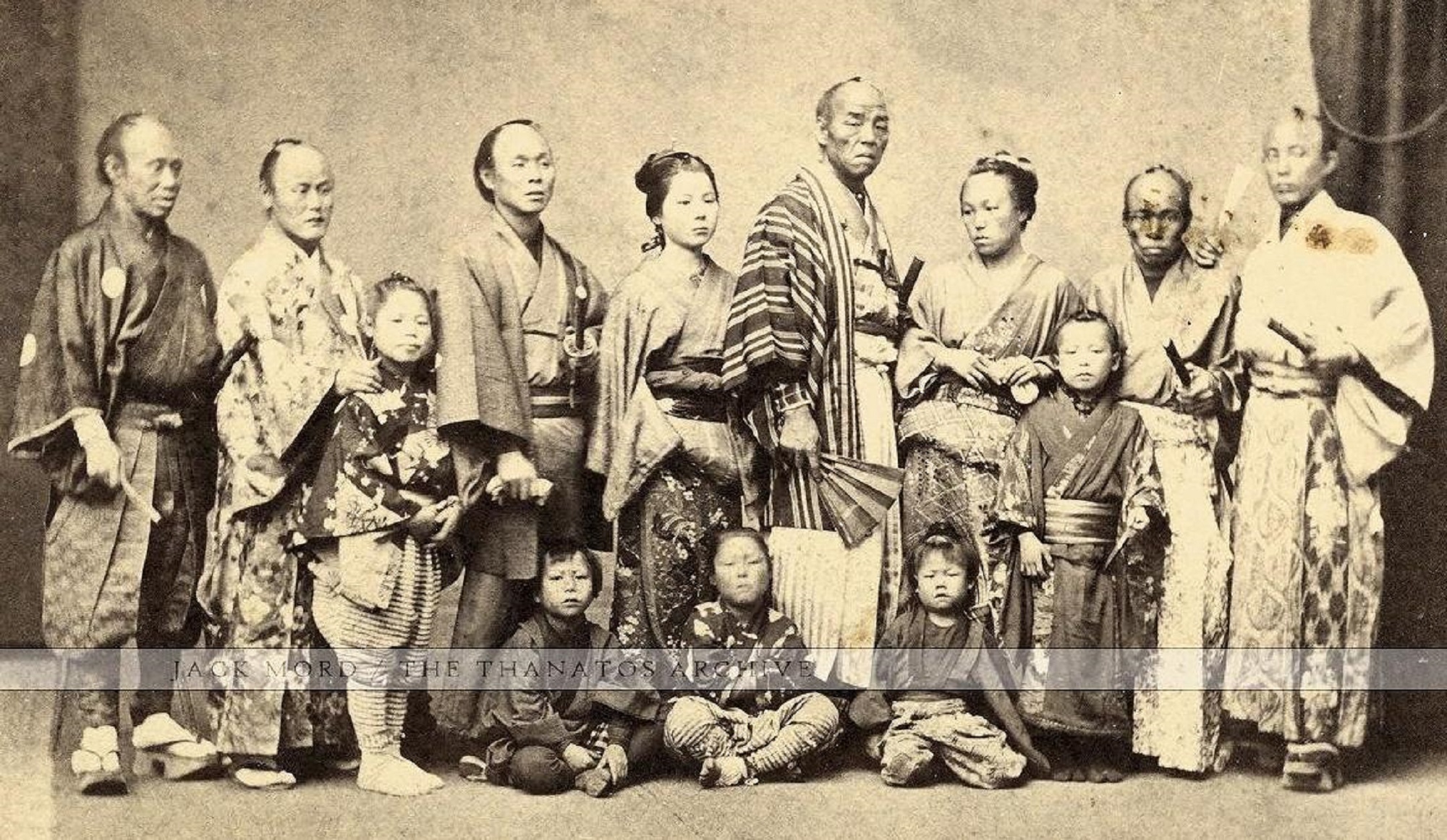 Of the 13 members of the Yeddo Royal Japanese Troupe, eight of them — including a 10-year-old boy — were among the first Japanese to play baseball in the U.S. Yamamoto Kinjiro, third from right, played third base for the Japanese team, and was called the “Belle of Japan” because he walked on a tightrope wearing a woman’s costume, a common performance in 19th-century Japan. (Courtesy of the Thanatos Archive.)

The Yeddo Royal Japanese acrobatic troupe toured America between 1871 and 1877. During their stops in the Washington/Baltimore area in the summer of 1872, they learned the finer points of baseball from a major leaguer and then competed in two exhibition games. Officials at the Japanese Baseball Hall of Fame in Tokyo call the acrobats’ encounter with the national pastime in 1872 “an amazing discovery … without a doubt, it’s the oldest record of Japanese playing the game.”1

Harue Tsutsumi, a Japanese researcher who specializes in kabuki (a classical Japanese dance-drama) in the Meiji Era (1868-1912), deserves credit as the first person to shed light on the Yeddo Royal troupe’s historic involvement in baseball.2 She discovered it while completing her doctoral thesis.3 With a master’s in theater history from Osaka University, she attended Indiana University and earned a doctorate in East Asian languages. In 2004 she concluded her studies at IU with the 331-page doctoral thesis titled Kabuki Encounters the West: Morita Kan’ya’s Shintomi-za Productions, 1878-79. In her thesis, Tsutsumi also shared details of the Yeddo Royal Japanese troupe act:

Genjiro performed the traditional Japanese acrobatic stunt of putting a bamboo pole on his shoulder, then playing the shamisen [a three-stringed traditional Japanese musical instrument] while a boy balanced himself on the top of the pole. An acrobat called “Sunikechi” walked barefoot on a ladder of sharp-edged swords. The troupe also presented a tightrope walker called “Belle of Japan” (“Amusements” Daily Morning Chronicle [Washington] 5 June 1872), who was actually a man who specialized in walking on a tightrope in a woman’s costume, a type of performance that was common in nineteenth-century Japan (Kodama 157). In his memoir, Kume recorded that a (male) troupe member called “Musume-san (girl)” walked the tightrope wearing woman’s makeup and a fancy woman’s kimono (Kume, Kume hakase 1: 251). According to Kurata, a tightrope walker called Yamamoto Kinjiro appears in a list of the members of Genjiro’s original troupe (Kurata, Kaigai koen kotohajime 94). Although the original name of the “Belle of Japan” tightrope walker never appeared in newspaper articles, it is likely that he was Kinjiro.4

The 16-member troupe departed Yokohama on July 22, 1871, on the SS Japan.5 They arrived in San Francisco on August 13, led by two British entrepreneurs known only as R. Mitchell and H.W. Welton.6 Mitchell told the press that he had lived in Asia for eight years and persuaded the troupe to leave for the West after seeing them perform in Hong Kong.7

The San Francisco Examiner reviewed their first US performance, and declared it “the very best troupe that has ever visited the city.”8 After performing in California for two months, the acrobats ventured east, eventually reaching the Baltimore area in April 1872.9

In Baltimore the troupe performed at Ford’s Grand Opera House, a venue founded by John T. Ford, owner of Ford’s Theatre in Washington, where President Lincoln was assassinated.10

On Friday, June 7, 1872, several members of the Yeddo Royal Japanese Troupe, along with their agent and an interpreter, played a baseball game against members of the Olympic Base Ball Clubs at Olympic Grounds in Washington. The Daily Morning Chronicle wrote, “This is to be a grand international game. … [T]he Japs are not novices with the ‘willow,’ and some Americans are not without apprehension that the West will meet with a crushing defeat from the East.”11

The Daily National Republican reported that the game was competitive, and “came near being a victory for the Orientals. The style in which they (the Japanese) handle the ball and bat somewhat astonished our boys, and had not rain stopped the game” there was a chance that the Japanese might have won the game. The Republican listed the final score of 18-17, with a breakdown of runs by inning.12 It reveals that the score was tied 15-15 going into the fifth inning, making for an exciting and entertaining finish.

The press reported that the Yeddo Royal Troupe practiced for two days to prepare for the game “under the guidance of Professor Brainard.”13 This “professor” for the Japanese was Asa Brainard , a pitcher for the Washington Olympics during the 1871 and 1872 seasons.

“Let’s Play Two!” Another Game for the Japanese

A week after the game at Olympic Grounds, the Baltimore Sun announced that the “celebrated Royal Yeddo Japs … will play a game of base ball with a club of nine well-known Baltimoreans, at Newington Park, on Friday, June 14, at 3:30 p.m.”14

Despite the fact that the game was billed as “Comic Base Ball,” the Japanese tourists were serious in their approach to the game. The pregame advertisement read: “The Japs are desirous of learning our national game, and on their return to their far-distant homes will be the first to introduce it into the ancient Empire of Japan.”15

The details of the Yeddo Royal game were published the following day. A16 ccording to the Baltimore Sun, the opposing Baltimoreans were replaced by a local nine known as the Dolly Varden Club. In this game, six innings were played and when it was over the Dolly Varden Club outscored the Japanese, 27-23.17

Three hundred fans witnessed the game at Newington Grounds, the home ballpark to the major-league Lord Baltimore baseball club of the National Association. The venue, which opened on April 22, about eight weeks before the game featuring the Japanese acrobats, seated up to 5,000, and was located in northwest Baltimore.18 Today it is the site of Cumberland & Carey Park and multiple apartment buildings, businesses, and churches.19

Based on previous reports from other games and performances, below is a possible lineup for the Yeddo Royal Troupe:20

The lineup for the Dolly Varden Club of Baltimore was not shared after the game against the Japanese. However, two weeks later the club competed in a Fourth of July contest and its lineup reflected the following names and positions:21

The Yeddo Royal Troupe left Baltimore and headed to Wilmington, Delaware, to perform at the Grand Opera House there. It appears that the troupe members were feeling confident about their newly developed ballplaying skills, as they challenged the Diamond State Base Ball Club of Wilmington to a game.22

After ads ran in both the News Journal and the Wilmington Daily Commercial promoting the contest, the game was canceled. Two members of the Yeddo Royal Japanese were unable to perform, so the game “was abandoned to the great disappointment of base ball fans.”23 After the attempted game in Delaware, there is no record of the Yeddo Royal Japanese Troupe competing on a diamond again.

Between 1873 and 1877, the acrobats zigzagged across the Midwest, the East Coast, and into Canada, never crossing west of the Mississippi River. In May 1875 the press reported that the troupe visited the baseball grounds of the St. Louis club. It was not specified if they visited the home of the St. Louis Red Stockings (Red Stocking Base Ball Park) or the St. Louis Brown Stockings (Grand Avenue Park), but their continued interest in the “national pastime” was noted.24

The Japanese acrobats journeyed south to the Caribbean and performed in Cuba in the fall of 1877, and in San Juan, Puerto Rico in 1878.25 After that, there is no record of the Yeddo Royal troupe performing in the West.

Did they return to Japan in 1878? At this point, no one knows for sure. What we do know is that even though they were the first Japanese to play baseball, they did not fulfill their desire to become the “first to introduce it into the ancient Empire of Japan.” That distinction belongs to American schoolteacher Horace Wilson, who is now enshrined in the Japanese Baseball Hall of Fame for his efforts.26

3 Footnote 16, page 271, of her thesis features the Japanese baseball research discovery. She wrote: “In Washington, several members of this troupe, along with their agent and an interpreter, played a baseball game with selected members of the Olympic and National Base Ball Clubs. The names of the Japanese troupe members who participated in the game were Yannanowah (first b.), Professor Gangero (s.s.), Kingero (third b.), Yoshi-Taro (l.fi), and Chonosuki (r.f.) Base Ball.” Daily Morning Chronicle (Washington) June 6, 1872: 4. Besides Genjiro, at least one likely member of Genjiro’s original troupe, “Yoshi-Taro,” who was probably Takamori Yoshitaro, the boy who performed on the top of the pole (Kurata, Kaigai koen kotohajime 94), appears on the list.

15 Knowing that Horace Wilson is in Japan and potentially introducing the game to his students around the same time makes the troupe’s expressed desire to take the game back to Japan a significant statement. There is no documentation of Wilson traveling to Asia with an expressed desire or intent to introduce baseball “to the ancient Empire of Japan.”

16 An additional article from the Alexandria (Virginia) Gazette that recaps the Yeddo Royal vs. Dolly Varden Club, reported that the final score of the game was 32-21. Alexandria Gazette, June 15, 1872: 2.

17 The opposing team’s name, Dolly Varden, is inspired by a woman’s outfit fashionable during the 1860s-70s in Britain and the United States. The name comes from a character in Charles Dickens’s 1839 historical novel Barnaby Rudge, and the term was used at the time to describe anything that was fashionable. Baltimore Sun, June 15, 1872: 1.