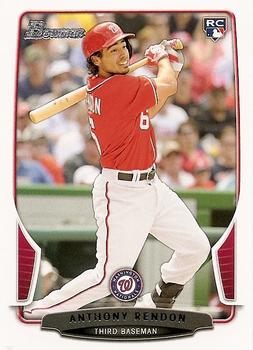 The Washington Nationals and Cleveland Indians entered their game on June 15, 2013, with identical 33-33 records. Expectations had been high for the Nationals after they won the NL East in 2012, but they were in second place 5½ games behind Atlanta.1 Cleveland hadn’t had a winning season since 2007 but this year was looking promising: they had briefly led the AL Central and were 4½ games behind Detroit.2

The Nationals’ offense had been flat lately, especially with Bryce Harper out of the lineup.3 Despite its .500 record, Cleveland had been significantly better at home (17-12) than on the road, so the enthusiasm of the crowd of 33,307 was not unwarranted.

Scott Kazmir (3-4 5.33 ERA) took the mound for the Indians. He started out well enough with a Denard Span fly out and an Anthony Rendon lineout. Ryan Zimmerman homered on the first pitch he saw, followed by Jayson Werth’s homer just onto the top of the bullpen. With those two hits, the Nationals equaled their hit total from the previous night’s 2-1 loss. Adam LaRoche struck out with the score 2-0, Nationals.

Jordan Zimmermann (not to be confused with Ryan Zimmerman, who has only one “n”) was looking for his 10th win of the season; he led the Nationals pitching staff at 9-3 with a 2.00 ERA. Michael Bourn grounded out to first. Zimmermann then walked Jason Kipnis on five pitches. After the first two pitches to Nick Swisher were called balls, shortstop Ian Desmond came over for a quick chat with Zimmermann. Whatever he said worked; Swisher struck out three pitches later. Swisher had been in a bit of a slump: he was 5 for his last 44. Michael Brantley grounded into a force play at second to end the inning.

Desmond’s 15-game hitting streak had ended the previous night so he tried to start a new one. He opened the top of the second with a home run that hit just over the yellow line on the left-field wall. That was all the Nationals got in the inning: Kurt Suzuki walked, but no runner advanced beyond first. Zimmermann worked a 1-2-3 bottom of the second.

Rendon started the third inning by doubling off the wall in left. Since debuting on April 21, Rendon started earning his “Tony Two-Bags” nickname by hitting six of his first 17 hits for doubles.4 Kazmir then walked Zimmerman and Werth on a total of nine pitches to load the bases. That triggered a visit from pitching coach Mickey Callaway. He must have imparted some wisdom because LaRoche grounded into a double play. One run scored. The Indians almost turned a triple play, but Zimmerman just beat the throw to third base and held onto the bag. Desmond worked a walk; the final pitch of the at-bat was a wild pitch allowing Zimmerman to score, bringing the score to 5-0, Nationals. Cleveland first-year manager, Terry Francona, had seen enough. He made the walk to the mound to replace Kazmir after 75 pitches in only 2⅔ innings, his shortest outing of the year. Matt Albers took over the pitching, facing Chris Marrero. Albers also threw a wild pitch, allowing Desmond to advance to second, but he was left there when Marrero struck out.

The Indians got on the board in the bottom of the third. After Ryan Raburn grounded out, Mike Aviles doubled off the wall in left field. Bourn struck out, then Kipnis singled past a diving Desmond, scoring Aviles. Kipnis then got caught in a rundown between first and second. He made it back to first but was called out, apparently for running out of the baseline. 5-1, Nationals.

Suzuki led off the fourth for the Nationals by earning his second walk of the game. After well-traveled Jeff Kobernus5 struck out, Span made it to second when the shortstop’s throw missed the first baseman on an attempted double play. The opportunity was wasted when Rendon grounded out to first.

After a strikeout and a groundout, the Indians pulled closer in the bottom of the fourth on back-to-back solo homers by Carlos Santana and Mark Reynolds. Santana’s went well into the seats, almost to the “Progressive” car in the right-center stands. The homers were only the seventh and eighth allowed by Zimmermann so far in 2013. Jason Giambi struck out to end the fourth with the score 5-3, Nationals.

Albers got Zimmerman to ground out to start the fifth, but when he allowed a single to Werth on the 11th pitch of the at-bat, Francona pulled him in favor of Bryan Shaw. Albers was at 33 pitches, close to his season high of 35. Shaw ended the threat by getting LaRoche to ground into his second double play of the night.

The Indians took the lead in bottom of the fifth. Raburn struck out, then Aviles blooped a single into center in front of Span. After Bourn flied out, Kipnis followed with a single, advancing Aviles to second. Swisher picked a good time to find his bat: His single scored Aviles. Two pitches later, Brantley doubled off the wall in right, scoring Kipnis and Swisher. 6-5, Indians. Zimmermann finally got out of the inning when Santana grounded to first while Craig Stammen was warming in the Nationals’ pen.

In the top of the sixth, Desmond made it as far as third on an error, a steal, and a lineout, but the Nationals weren’t able to push him home. Stammen started his outing in the bottom of the sixth by walking Reynolds on four pitches. After Giambi flied out, Stammen walked Raburn but got out of trouble when Aviles grounded into a double play.

Cody Allen took over the pitching in the top of the seventh, allowing only a one-out single to Rendon. The inning ended with an impressive catch by Brantley, who sprinted in from left and dove to catch Werth’s sinking liner. Ian Krol, pitching in only his fifth career game, worked a 1-2-3 bottom of the seventh, including two strikeouts.

The Indians’ side-arming set-up man Joe Smith got LaRoche, Desmond, and Suzuki to ground out in the top of the eighth. However, he also allowed a home run to pinch-hitter Chad Tracy, tying the game, 6-6. Krol continued pitching the bottom of the eighth, inducing a foul pop from Brantley and striking out Santana. Nationals manager Davey Johnson chose Drew Storen to face Reynolds, who battled to a full count but ultimately struck out.

Vinnie Pestano, the Indians’ closer, took the mound to try to preserve the tie and hope for a walk-off. The Indians had six walk-offs already in 2013, the most in the American League. Steve Lombardozzi flied out to Bourn in center: Bourn didn’t even have to move to catch it. The second out was just as easy: Span grounded right to the first baseman. Rendon popped the first pitch into foul ground near the first-base coach’s box. Either first baseman Swisher or second baseman Kipnis could have caught it but it dropped just a few feet from the foul line as they looked at each other and the ball sitting on the grass. (Swisher was charged with the error.) Given new life, Rendon hit his first major-league home run, just over the fence in right field, giving the Nationals a 7-6 lead and silencing the crowd: Even the drummer in the stands fell silent.6 Rendon finally began smiling as he rounded third. (Because the ball landed in the bullpen, Rendon got the home-run ball back.) That was the seventh solo home run in the game. Zimmerman struck out but the Nationals had pulled ahead, 7-6.

Rafael Soriano, the Nationals’ closer, got two quick strikeouts. Aviles then doubled to the wall for his third hit of the day. That was all the Indians got, though: Bourn hit a line drive right into LaRoche’s glove to end the game.

In addition to the sources cited in the Notes and personal notes from the game, the author also relied on Baseball-reference.com and Retrosheet.org.

I was at this game, along with about two dozen other Nationals fans. We sat right behind the visitors’ dugout, where we had a great view of Tony “Two-Bags” coming back to the dugout after his first homer. You could have lit the stadium with his smile. At the very end of the game video you’ll see him look up to make eye contact with the group of Nationals fans who were standing and cheering as the team returned to the dugout after their on-field high fives.

1 They finished second in the division, 10 games behind Atlanta.

2 They finished the season one game back of Detroit, good enough for the wild card; but then lost that game to the Tampa Bay Rays.

4 He finished the season with 23 doubles.