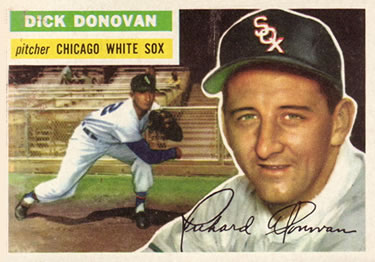 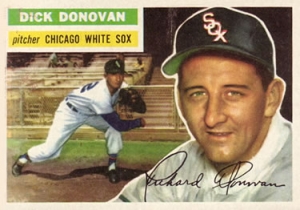 The 1956 Chicago White Sox and their fans were genuinely optimistic about the 1956 season. They had finished third only five games behind the 1955 New York Yankees and just two games behind the second-place Cleveland Indians. This was despite having Minnie Minoso, their best hitter, beaned May 18, 1955, with a resultant fractured skull. Not only was he lost for 15 games, but he continued to suffer headaches and dizziness and scored 40 fewer runs than in 1954, drove in 46 fewer runs, and hit only .288. Now he was healthy.

In addition, the White Sox had traded their All-Star shortstop Chico Carrasquel and former but disappointing All-Star center fielder Jim Busby to the Cleveland Indians for power hitter Larry Doby. With Doby in center field, rookie Luis Aparicio at shortstop, and Minoso healthy, they would have more speed, improved fielding, and more scoring. Thus 1956 should bring a pennant for them, their first since 1919.

Alas, this optimism was unfounded. On the morning of June 17, 1956, they were five games behind the first-place Yankees, although only one game behind in the loss column. Perhaps a sweep of the lowly Washington Senators, then the Baltimore Orioles, and perhaps the Yankees would cure their problems. The Senators would finish in seventh place that year, 38 games behind the Yankees. Dick Donovan started for Chicago against Bunky Stewart.

Whitey Herzog’s single (one of his three hits in the game) produced the only baserunner in the top of the first. However, Sammy Esposito singled for the White Sox in the bottom of the inning and Nellie Fox walked. Minnie Minoso singled Esposito home and Dave Philley singled Fox in. After Larry Doby walked, Senators manager Chuck Dressen replaced Stewart with Bob Chakales. Sherman Lollar popped out but Walt Dropo singled in Minoso and Philley. Luis Aparicio’s single drove in their fifth run for a 5-0 lead.

A 1-2-3 Senators second inning was followed by a four-run White Sox rally in their half, starting with a walk to Fox, Minoso’s single, and Philley’s two-run double. That was followed by Doby’s infield single, and an error by first baseman Roy Sievers that allowed Philley to score the third run of the inning. After Lollar beat out a bunt for a single, Dropo hit a sacrifice fly to score Doby for a 9-0 Chicago lead.

Although the Senators had two singles in their third, they could not score. Harmon Killebrew had singled for Chakales and thus Connie Grob was now pitching. Herb Plews entered as the second baseman and Pete Runnels moved from second to first base, replacing Sievers. This allowed seldom-used bonus baby Killebrew to get some playing experience. Minoso quickly singled and scored when Plews made a throwing error on Philley’s grounder, and put the latter on second base. Another single by Lollar scored Philley and the inning ended 11-0.

In the top of the fourth, Runnels singled, Plews walked, and Clint Courtney singled for a run.  However, Donovan easily retired Jim Lemon, Ernie Oravetz, and Jose Valdivielso, ending the frame 11-1. Then Aparicio singled in the bottom of the fourth, went to second on a wild pitch, and scored on Donovan’s double. Another wild pitch by Grob sent Donovan to third and he scored on Fox’s sacrifice fly. The inning ended with Chicago leading 13-1.

In the fifth Grob walked and scored when Herzog tripled, and the lead was cut to “only” 13-2. However, after Jim Rivera grounded out, Doby walked and scored when Dropo doubled. (Lemon misjudged his long fly ball.) This increased the score to 14-2 and it remained such until the seventh. While Grob and Herzog singled for Washington in the top of the seventh, groundouts by Runnels and Plews, followed by Courtney’s fly ball ended their rally. In the bottom of the seventh, Lollar hit a home run to increase the lead to 15-2.

After a 1-2-3 Senator eighth, Aparicio led off the White Sox half with a triple and scored on Donovan’s single. Esposito also tripled and another run was in. Fox reached first on a fielder’s choice and Esposito scored. Minoso doubled Fox to third and Bubba Phillips ran for him. Jim Rivera’s single drove in Fox and moved Phillips to third. Doby’s sacrifice fly scored Phillips for the fifth run of the inning. Now it was 20-2.

The ninth was uneventful as Killebrew struck out, pinch-hitter Carlos Paula popped out for Grob, and Herzog struck out. Chicago had won 20-2 with 21 hits but only one home run, which was a solo. At the time this was Donovan’s fourth victory of the season, and three of them were against Washington.

Unfortunately for White Sox hopes, the Senators quickly went out to a 6-0 lead in the second game and went on to win 10-4 behind Chuck Stobbs. The White Sox outhit the Senators 14 to 13, but could not bunch their hits successfully. Stobbs was 13-10 at the beginning of September but lost his last five games. He then lost his first 11 games in 1957 for a personal 16-game losing streak.

On the positive side, Chicago then took four straight from the Baltimore Orioles, then four straight over the Yankees in a memorable sweep and then beat the Boston Red Sox on June 26. That put them officially in second place 1½ games behind the Yankees, but actually two games ahead of them in the loss column. However, an 11-game losing streak in July doomed Chicago’s pennant chances and they finished third, one game ahead of the Red Sox.

While Chicago did well against the Cleveland Indians (15-7), they were only 9-13 against the Yankees.  New York was led by Mickey Mantle who had his greatest major league season winning the triple crown with 52 home runs, 130 RBIs, and a .356 batting average and no one on the White Sox approached these numbers.  In addition, the Yankees were also aided by pitchers Johnny Kucks who went 18-9 that year after being only 8-7 in 1955 and Tom Sturdivant who was 16-8 after being only 1-3 the prior year. The White Sox would not score 20 runs in a game again until April 22, 1959, against the Kansas City Athletics.

In addition to Baseball-Reference.com and Retrosheet.org, the author also consulted: