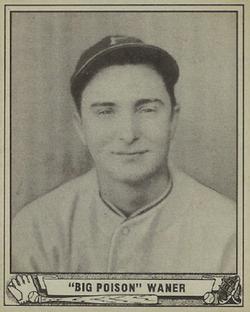 Boston Braves outfielder Paul Waner collected his 3,000th career hit on June 19, 1942, a fifth-inning single off Pittsburgh Pirates starter and ex-teammate Rip Sewell. Playing against the team for whom he had labored for 15 seasons, Waner became just the seventh player to reach the 3,000-hit milestone — the first National Leaguer since Honus Wagner achieved the feat in 1914 and the first major leaguer since Eddie Collins made his 3,000th hit in 1925. The RBI single by the left-handed-swinging Waner came in Boston’s 11-inning loss to the Pirates at Braves Field.

Home-plate umpire Tom Dunn stopped the game briefly after Waner’s hit so that the future Hall of Fame right fielder could soak in the historic moment.1 Waner’s former Pittsburgh teammates and his current Boston teammates gave him a standing ovation after the ball he mashed for his 3,000th hit was presented to him. According to the Boston Globe, the game was stopped for three minutes while members of the Braves and Pirates congratulated Waner.

Waner’s single to center plated Tommy Holmes to cut the Braves’ deficit to 4-2 in the fifth. The Braves added a run in the sixth, then tied the score, 4-4, in the bottom of the ninth against Sewell.

Bob Elliott’s 10th-inning home run — his second of the game — off Boston’s Johnny Sain gave the Pirates a 7-4 edge. In the bottom of the inning Nanny Fernandez, who went 3-for-6 in the contest, pulled the Braves within one, smacking a two-run homer off Pirates reliever Dutch Dietz. Then Dietz closed out the 7-6 victory for the Pirates in the game that would be remembered for the single that put Waner in rare company in baseball history.

With his hit off Sewell, Waner joined Ty Cobb, Tris Speaker, Honus Wagner, Eddie Collins, Nap Lajoie, and Cap Anson as the only players at the time to reach the 3,000-hit plateau. It was only fitting that Waner connected on the momentous hit against the Pirates, the team with which he had spent a decade and a half (1926-1940) tearing the cover off the ball.

Waner was the National League Most Valuable Player in 1927, his sophomore year in the big leagues, recording a .380 average and his first of three batting titles as a member of the Pirates. Waner also led the NL in RBIs (131) and hits (237) that season, spearheading the Pirates to a pennant before they were swept by the New York Yankees in the World Series.

During his 15-year tenure in Pittsburgh, Waner batted .340 and led all players with 2,868 hits, 558 doubles, and 187 triples. Despite his small stature (5-feet-8), Waner was known as “Big Poison” when he played for the Pirates. Big Poison patrolled right field for Pirates, while his younger brother Lloyd — nicknamed Little Poison — took the center-field duties. Paul and Lloyd dominated baseball in Pittsburgh for 14 years together. (Lloyd broke into the big leagues in 1927, a year after his older brother.)

Legend has it that the Waner brothers attained their “Poison” nicknames in a game against the Dodgers at Brooklyn’s Ebbets Field. A Dodgers fan who had a deep Brooklyn accent told other people in the stadium that he was there to see the “big person and little person” from Pittsburgh (Paul and Lloyd) but because of his accent, “person” sounded like “poison.”2

Paul and Lloyd were also referred to by many as the “Waner Wonders.” They combined to record 5,611 hits — the most by two brothers in the major leagues.3

The Waner tandem — the only brother duo to be elected to the Baseball Hall of Fame4 — was broken up when Paul was cut by the Pirates at the age of 37 after a disappointing 1940 season. He signed with the Brooklyn Dodgers, but was released a month into the 1941 season and signed with the Braves. There he rejoined Lloyd, whom the Pirates had traded to the Braves in May for right-handed pitcher Nick Strincevich. The reunion was brief; in June Lloyd was traded to the Cincinnati Reds for Johnny Hutchings, a right-handed reliever.

It had appeared that Paul Waner got his historic 3,000th hit in a home contest against the Cincinnati Reds on June 17. Waner knocked a sharp grounder to Reds shortstop Eddie Joost in the fifth inning. Moving to his left, Joost knocked the ball down with his backhand near second base, but was unable to make a throw to first, and Waner was rewarded with a hit by the official scorer, Jerry Moore. Fearing that some would view the play as an error rather than a hit (thus tainting the moment), Waner waved furiously at the press box to get Moore’s attention so that he could change the call to an E-6.5

“No, no. Don’t give me a hit on that. I won’t take it,” screamed Waner, who eventually convinced Moore to charge Joost with an error.6

“I don’t want it to be a questionable hit. I want number three thousand to be a good clean hit that I can remember,” Waner said.

Waner recorded his “clean” hit two days later at Braves Field with his single off Sewell.