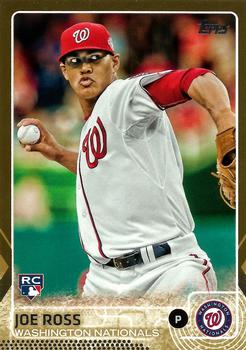 Joe Ross faced an uphill challenge in his third major-league start. True, he was coming off his first win (against the Brewers: 8 innings, giving up only 7 hits, 2 runs), but he was facing a hot Pittsburgh Pirates team on an eight-game winning streak. The Pirates started the day at 39-27, 4 games back of the Cardinals in the National League Central. Ross had been brought up from Double-A Harrisburg when both Stephen Strasburg and Doug Fister landed on the disabled list.1

Another potential challenge for the 22-year-old Ross was his team on the field. Half the Nationals’ (34-33, 1½ games back of the New York Mets in the National League East) regular lineup was absent due to injury (Bryce Harper, Ryan Zimmerman, Jayson Werth) or a rest day due to a slump (Ian Desmond). Only two players were playing the same position they played on Opening Day (Yunel Escobar at third base, and Wilson Ramos catching).

On the other end of the pitching spectrum was the Pirates’ starter, A.J. Burnett (6-2, 1.89 ERA2). The grizzled 38-year-old veteran was making his 418th start, seeking his 162nd win. Ross was 6 years old when Burnett made his first major-league start. (Burnett really was “grizzled”; he hadn’t shaved and looked all of his 38 years.)

Ross pitched an efficient first inning, retiring three Pirates on 11 pitches, including striking out Andrew McCutchen on a slider. In the bottom of the first, Denard Span and Anthony Rendon greeted Burnett with back-to-back singles. Franciso Cervelli, the Pirates catcher, visited the mound for a quick chat, as Burnett’s pitches seemed to be up in the strike zone. With Rendon running on a 1-and-1 pitch to Escobar, the Pirates got an out at first, but couldn’t turn a double play, so Span scored. Ramos continued his 20-game on-base streak with a run-scoring double in the gap, bringing the score to 2-0, Nationals. Cervelli came out for another chat with Burnett, who struck out Danny Espinosa to end the inning.

Ross’s second inning did not go as well as the first. He gave up singles to Jung Ho Kang, Cervelli, and Gregory Polanco (scoring Kang), although he did strike out Pedro Alvarez swinging. Given this was a Friday night game, first of a three-game series, there were a substantial number of visiting Bucs fans to cheer the run. But Ross recovered, getting a popout and another strikeout to finish the inning. There were three singles in the bottom of the third as well: Tyler Moore, Michael A. Taylor, and Clint Robinson. Ross had struck out, so Rendon came to the plate with one out and the bases loaded. But Burnett dialed up a 4-6-3 double play to escape the jam, keeping the score at 2-1, Nationals.

Josh Harrison opened the third inning with a single up the middle. Starling Marte swung at a pitch almost in the dirt, and lined it right into Ross’s glove. Ross bounced his throw to first, but Moore was able to grab it to double off Harrison for the second out. McCutchen struck out on another slider to end the half-inning. In the bottom of the third, Escobar hit one down the third-base line. Kang grabbed it, but his jump throw from beyond the baseline went wide at first, allowing Escobar to take second. He tagged up and ran for third on a Robinson flyout, then scored on Ramos’s single. Espinosa grounded into a 4-6-3 double play to end the inning with the score 3-1, Nationals.

Ross struck out the side in the top of the fourth. In the bottom of the inning, Moore doubled into the left-field corner, then moved to third on Taylor’s groundout. Ross got his first major-league hit when the Pirates infield all went for his little chopper over the mound – and no one covered first base. For some reason, the Pirates threw the ball into their dugout, where their ballboy tossed it into the crowd, while home-plate umpire Mike Winters and Pirates manager Clint Hurdle, were yelling “NO!” in the background. Luckily, the fan passed the ball back to the Pirates’ dugout, where the Nationals’ batboy ran over to retrieve it. Span lofted one to left field, not deep enough for the less-than-speedy Moore to score, but Ross did tag up and advance to second.3 A walk to Rendon loaded the bases, but Burnett got Escobar to ground out to escape his second bases-loaded jam.

In the fifth inning, Polanco got a gift double when Span lost the ball during the “10-minute twilight zone” (the 10 minutes during twilight at Nationals Park when the ball gets above the lights and becomes invisible). Espinosa, realizing what was happening, came out to help but neither of them could get a bead on the ball, so it fell in for a hit. Ross was unfazed by the hit, and struck out Jordy Mercer and Burnett – again with that slider. Harrison thought he might have a homer, or at least a double, but Taylor made a great no-look catch, reaching behind his head up against the visitors bullpen fence, so the score stayed 3-1, Nationals. No scoring for the Nationals in the bottom of the fifth: Burnett did remember to cover first base this time on a Robinson groundout. Espinosa singled and stole second (his first stolen base in three tries), but that was wasted when Moore struck out.

Ross needed only seven pitches to dispose of three Pirates in the sixth, including another strikeout. Nothing for the Nationals in the bottom of the sixth, but Burnett achieved a new record for strikeouts, passing Andy Pettitte for 37th on the all-time strikeout list.4 This time, Hurdle started yelling for the ball right away.

In the top of the seventh, Ross got his 11th strikeout but did give up the second walk of his career,5 perhaps affected by the rain that started during the inning. With 11 strikeouts, Ross joined John Lannan and Stephen Strasburg as the only Nationals rookies to strike out 10 or more in a game.6 He induced a double play to end the inning. In the bottom of the inning, Robinson hit a one-out single to left, then scored when Espinosa tripled off the scoreboard in right field, bringing the score to the final 4-1, Nationals. Polanco made a great effort to catch the ball, crashing into the plastic fence protecting the scoreboard. The trainer and manager came out to check on him, and decided to pull him, although he walked off the field without assistance. Hurdle double-switched, bringing Jose Tabata in to play right and Jared Hughes to pitch. Hughes needed only one pitch to end the inning, on a flyout by Moore.

In the eighth, Tabata’s one-out single up the middle ended Ross’s night. He left the mound to a standing ovation and high fives and handshakes in the dugout. The rain had diminished so the crowd of 38,935 was back in the seats to cheer his performance. David Carpenter7 finished the inning with two quick outs. In the bottom of the eighth, Hughes pitched a 1-2-3 inning for the Pirates.

In the ninth, Drew Storen, the Nationals’ closer, ran in to the usual chant of “Druuuuuuuu” from the home crowd. He struck out McCutchen, leaving the All-Star 0-for-4 on the night. Another strikeout and a groundout, and Storen had earned his 20th save, and clinched Ross’s second win, all wrapped up in an efficient 2:36.

The big performance of the night was definitely Joe Ross’s: In addition to his first hit, his cool mound demeanor and pitching performance impressed the fans, the sportswriters, and his teammates.8

Given his performance, and the success of the Nationals’ “second string,” the Nationals fans allowed themselves some hope for the rest of the season, even despite the number of significant players on the disabled list. The Nationals’ record after this game was 35-33, which was identical to their record on June 15, 2014. They had made the playoffs in 2014.9

I was able to acquire Ross’s 11th-strikeout ball from the Nationals’ Authentics the next day. 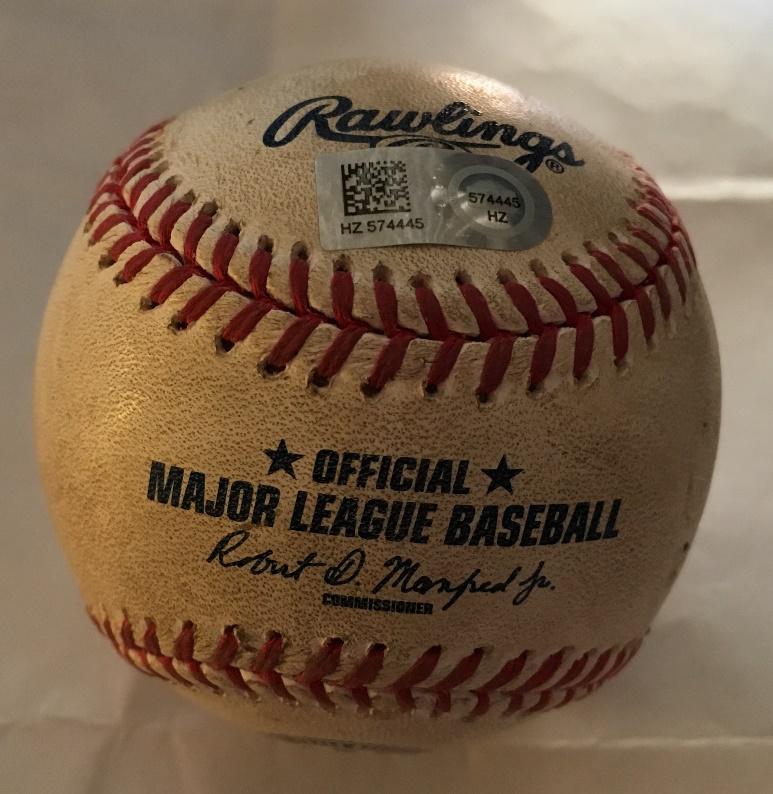 2 Fourth best in the majors on that date. masnsports.com/nationals-pastime/2015/06/span-sparks-nats-early-lead-2-0.html.

3 This wasn’t a fluke. Ross, known as a good athlete, had been and would be used by the Nationals as a pinch-hitter, designated hitter, and pinch-runner. retrosheet.org/boxesetc/R/Prossj002.htm.

5 He had faced 51 batters before issuing his first walk.

7 Carpenter had been acquired by the Nationals in a trade with the Yankees the previous week. masnsports.com/nationals-pastime/2015/06/nats-asking-a-lot-from-rookie-joe-ross-in-second-start.html, baseball-reference.com/players/c/carpeda01.shtml#all_transactions_other.

9 Unfortunately for the Nationals fans, history did not repeat itself. The New York Mets won the National League East Division by seven games, and the Nationals missed the playoffs entirely.