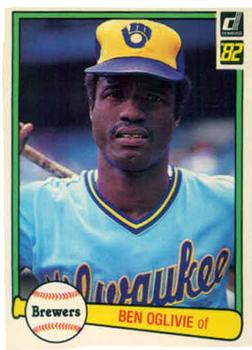 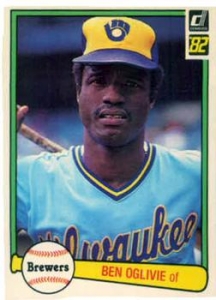 “I haven’t been swinging the bat real good,” admitted former home-run champ Ben Oglivie after breaking out of a 1-for-17 slump and just one homer in his last 41 at-bats by whacking three round-trippers. “I’ve been getting a lot of changeups. I give a lot of credit to my teammates for helping me make some adjustments.”1

The Milwaukee Brewers were hitting on all cylinders, erasing the memories of the club’s early-season funk that resulted in the firing of manager Buck Rodgers after 47 games. New skipper Harvey Kuenn took a losing club (23-24) and had guided them to 11 wins in their last 17 games (including a tie) to move into third place in the AL East. “There’s a big change of attitude on this club,” said Oglivie about the fresh start under Kuenn. “When that happens, I think you have a good chance to win some games. I think we’re on a roll now.”2 A player’s manager, Kuenn, himself a former 15-year big-leaguer, who led the AL in hits four times in the 1950s, kept his players relaxed and encouraged them to go for the fences. “We’re playing one at a time,” cautioned Kuenn.3 Harvey’s Wallbangers, so named for their long-ball ability, were born and teams were taking notice. The Brew Crew was looking to sweep a four-game series against the Detroit Tigers in the Motor City. Manager Sparky Anderson’s club (36-25) was in a free fall, having lost their last six games and seven of eight to fall out of first place in the AL East, and trailed the Baltimore Orioles by two games.

Tiger Stadium, the Old Gray Lady at the intersection of Trumbull and Michigan Avenues, drew a robust crowd of 31,696 for a 12:35 start time on a beautiful summer Sunday in southeastern Michigan. The partisan crowd had ample reason to cheer in the first inning when the hometown Bengals exploded for four runs off Brewers starter Jim Slaton. A 32-year-old right-hander and longtime workhorse on poor Brewers teams in the 1970s, Slaton (4-1 thus far in ’82 and 114-121 in his career) had been moved to bullpen and was making just his fourth start of the season. Kirk Gibson cranked his sixth home run of the season, a three-run blast with no outs, and Richie Hebner hit a two-out solo shot.

Two players with Detroit connections enjoyed their homecoming with productive afternoons. Ted Simmons, from suburban Southfield, who played college ball at the University of Michigan, doubled, and then was driven home when former Tiger Oglivie smacked a fastball from starter Jerry Ujdur over the wall. A 25-year-old right-hander, Ujdur was recalled at the beginning of the month and was making his third start of the season.

The long balls were far from over. Lance Parrish smacked a solo shot in the third to give the Tigers a 5-2 lead. With runners on the corners and two outs and the Tigers threatening to blow the game open, Kuenn pulled Slaton and called on Jerry Augustine to extinguish the fire.

A 29-year-old left-hander, Augustine had struggled mightily thus far in 1982 and was 0-2 with a 5.90 ERA, but he “looked like a different pitcher” in the game, gushed Brewers beat reporter Vic Feuerherd in the Milwaukee Sentinel.4 Augustine silenced the Tigers’ bats over the next 4⅓ innings, yielding just one hit and fanning three. He “kept working the inside corner with a varied assortment of fastballs and changeups,” wrote Feuerherd.5 Augustine’s performance was not lost on Kuenn, still figuring out his bullpen. “He did a super job to keep us in the game,” the skipper said.6

While Augustine was slinging zeroes, the Detroit connection was causing Sparky Anderson nightmares. It was a case of déjà vu in the fourth when Simmons singled and Oglivie sent Ujdur’s changeup over the fence to pull the Brewers to within one run, 5-4. Two innings later Simmons got into the home-run derby, cranking his ninth of the season to tie the score, 5-5. Oglivie took aim at what sportswriter Brian Bragg of the Detroit Free Press called a “lousy fastball from Ujdur and rocketed one that “bounced off the stadium roof and back into the ballpark,” according to Bragg.7 All 11 runs of the game at this point were courtesy of home runs.

Oglivie’s 15th blast of the season helped end Ujdur’s day. The 33-year-old Panamanian slugger had paid his dues in developing into an All-Star and home-run threat. After clubbing 21 round-trippers as a 28-year-old in 1977 in his first season as primarily a starter with the Tigers, he was shipped to the Brewers. Two years later, he whacked 29 and then 41 in 1980 to tie Reggie Jackson for the AL lead in home runs. He had also hit three home runs once before, on July 8, 1979, also against the Tigers in Detroit. This time, however, he came to the plate with a chance to join a select group of players with four home runs in a game. After Cecil Cooper led off the eighth with a double, Anderson had no intention of letting Oglivie even sniff a strike and called for an intentional walk from reliever Dave Tobik. “I wasn’t disappointed when they walked me,” said Oglivie, probably disingenuously, but added, [w]hen you look at your lineup I figure it’s an advantage to us for them to put another runner on.”8 Oglivie was right: Two batters later Roy Howell lined a single to drive in Cooper for the game’s final run.

Despite the Brewers’ inconsistent pitching thus far in ’82, Kuenn had the luxury of calling on the reigning AL MVP and Cy Young Award winner at the end of the ballgame. Rollie Fingers hurled the last two frames, striking out the side in the ninth to preserve the 7-5 victory for Augustine and end the game in 2 hours and 34 minutes.

Postgame discussion concentrated not just on Oglivie’s big day, but also on the Wallbangers’ impressive bats. “I don’t know how you’re going to hold Milwaukee down right now,” declared Anderson. “They are just swinging the bat so well.”9 Tigers catcher Lance Parrish described the Brew Crew’s offense as “awesome” and gushed, “They’ve got five guys right in the middle of the lineup who are capable of 25 homers a year. If everybody in that lineup hits like they’re capable of, they’ve got the best-hitting team in baseball.”10 Parrish wasn’t exaggerating. The Brewers ultimately led the majors with 216 home runs in 1982, and those “five guys” were the reason: Robin Yount, the eventual AL MVP, hit 29, Cooper spanked 32, Ted Simmons hit 23, Oglivie walloped 34, and the number-six hitter, the Fu-Machu-wearing Gorman Thomas, led the club with 39.

Oglivie hit 235 home runs in his 16-year-major-league career, including three on three occasions. The last time occurred On May 14, 1983, in the Brewers’ walk-off 8-7 victory over the Boston Red Sox at County Stadium.