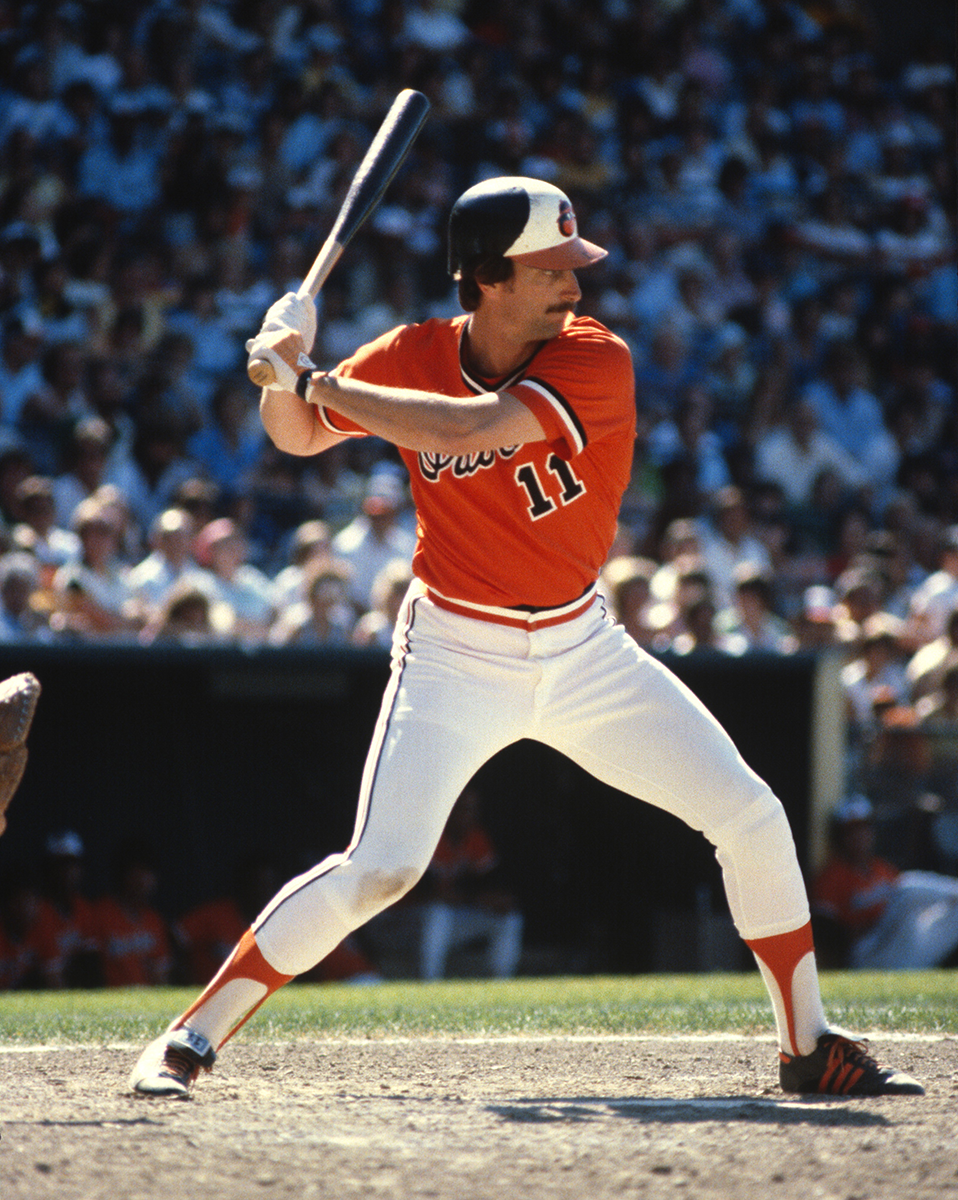 The Orioles entered the bottom of the ninth down 5-3 to the Detroit Tigers, but Ken Singleton’s one-out home run off reliever Dave Tobik put a buzz into the Memorial Stadium crowd of 35,456 who began to hope for another comeback win. In their last home game, on June 10, the Orioles scored three runs in the bottom of the ninth for a 5-4 victory over Texas, building momentum for a road trip that saw them go 7-1, including winning the final six games in a row. Anticipation of a seventh consecutive victory grew when Eddie Murray followed Singleton’s home run with a single to right field. He represented the potential tying run, but Gary Roenicke popped out to second, and Doug DeCinces became the last hope for the Birds.

A familiar chant from superfan Wild Bill Hagy’s roost in Section 34 of the upper deck mingled with anxious cheering: “Come on DeCinces: Over the fences”!1

The Orioles third baseman took a high curve for ball one.

The count ran to 1-and-1 when DeCinces took a “big rip” at a fastball and fouled it straight back.2

The “Charge!” call rang out over the public-address speakers, and a full-throated “Charge!” answered back. Baltimore announcer Bill O’Donnell then described the birth of Oriole Magic:

O’Donnell could barely be heard over the crowd, and his partner in the booth that night, longtime Baltimore sports broadcaster Charlie Eckman, became even more excited than O’Donnell.

And indeed they were. DeCinces was mobbed at home plate by the entire Orioles team and several members of the grounds crew.5 The fans refused to leave even after DeCinces and the victorious Orioles had disappeared into the clubhouse, but his teammates pushed him back onto the field for a curtain call. Orioles Magic had been born. DeCinces described it best:

“That night, that game, that home run, it triggered something. It was the game that triggered things. The emotion just multiplied from there. It was such an event, and the chemistry was there already. The radio broadcast had a lot to do with it. I heard the tape later. The announcers, Bill O’Donnell and Charley Eckman, were going wild. Their excitement really came through.”6

Such games never look promising early on, of course. Orioles starter Mike Flanagan gave up a run in the first and three in the second, aided by three errors, including a catcher’s interference call on Rick Dempsey. Flanagan, who was exhibiting none of the form that would win him the Cy Young Award after the season, yielded a home run to Lance Parrish in the third, and when John Wockenfuss singled two batters later, skipper Earl Weaver lifted southpaw Flanagan in favor of Sammy Stewart. Baltimore, which had matched Detroit’s first-inning run, scored two more in the third off Tigers rookie Pat Underwood. With Lee May on second and DeCinces on third, Underwood was pulled in favor of Kip Young, who retired Rich Dauer on a fly ball. Young proceeded to throw five shutout innings, striking out four of the final five batters he faced, including DeCinces in the seventh. This was the best outing of Young’s season, and one of the best of his brief career, 1978-79.

Meanwhile, Sammy Stewart cruised into the seventh inning, then issued a two-out walk to Ron LeFlore, which was followed by Alan Trammel’s single. Tippy Martinez came on in relief, and retired Steve Kemp on a fly ball to left to squelch the budding rally. The score remained 5-3 heading into the bottom of the ninth when Tigers manager Sparky Anderson opted for Tobik.

Then the Magic began.

If there was any doubt that Orioles Magic was now a real power, the Orioles used it again the next day in a Saturday doubleheader. They scored three runs in the bottom of the ninth in game one on Eddie Murray’s homer for an 8-6 win, then plated two in the seventh and one in the eighth of game two for a 6-5 victory. Terry Crowley’s pinch-hit single off none other than Dave Tobik sealed the nightcap, although it was starter Jack Billingham who took the loss.

The Orioles played .793 baseball in June, going 23-6, and never looked back before the magic ran out in the World Series against the Pirates.

Several events had taken place which set the stage for DeCinces’ theatrics that June night. The Orioles had switched their radio flagship station from WBAL to WFBR, a smaller station, but one that attracted a younger, more energetic audience; the same kind of fans who were beginning to fill Section 34 and view Wild Bill Hagy as a folk hero. Furthermore, the Baltimore Colts football team, long the city’s favorite sports team, was in decline, and the Orioles were at the beginning of their second period of glory, culminating in the World Series championship in 1983 with largely the same team.

One key player missing from the ’83 champions, however, was Doug DeCinces. He was traded to the California Angels in 1982 to make room for rookie Cal Ripken. When Earl Weaver moved Ripken to short later that season, a glaring hole was created at third; a hole not adequately filled until Ripken moved back to the position 15 seasons later, in 1997.

DeCinces not only endured an unceremonious exit from Baltimore, he had a tough beginning to his career as well. Traded to make room for Cal Ripken, he was also the guy who replaced Brooks Robinson. Nevertheless, DeCinces, whose 15-year career ended in 1987, would be the key player in one of the greatest moments in Orioles history.

In addition to the sources mentioned in the Notes, the author also relied on Baseball-Reference.com.

2 Bill O’Donnell’s play by play on WFBR via YouTube: youtube.com/watch?v=IKp8ZKWQSx8.

3 O’Donnell’s play by play on WFBR.

4 O’Donnell’s play by play on WFBR.