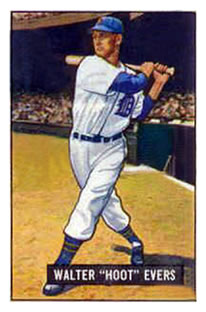 A record-setting home-run barrage and a thrilling finish at Briggs Stadium left a big impression on even the most time-tested of baseball minds in June of 1950.

Detroit Tigers manager Red Rolfe seemed amazed. “Did you ever see a game like last night’s? I never did,” he said.1

Will Harridge, president of the American League, sat in the press box high above home plate. He simply said, “Never saw anything like it.”2

Rolfe and Harridgewere both correct. What happened on a warm Friday night at Briggs Stadium on June 23, 1950, was something nobody had seen: A record 11 home runs in one major-league game. The previous record of 10 had been accomplished three times; once in 1923, another in 1930, and again in 1947.

Toss aside the home-run record, and it still was an entertaining, back-and-forth game that ended in improbable fashion — a two-run, game-ending, inside-the-park home run to wipe out a one-run deficit and give the Tigers a thrilling 10-9 victory over the defending world champion Yankees.

Lyall Smith, sports editor of the Detroit Free Press, wrote that Briggs Stadium “was a madhouse by game’s end.”3

The Yankees led the Tigers 9-8 going into the bottom of the ninth. New York had left-hander Joe Page, its top-notch relief pitcher (he had led the AL in saves with 27 in 1949), on the mound. But the Tigers saddled Page with a blown save and a loss.

Tigers third baseman George Kell popped out to start the ninth before Vic Wertz lined a double to the wall in left-center. That brought Hoot Evers to the plate.

Evers, a right-handed hitter who had not hit more than 10 homers in any of his first four seasons, laced a 1-and-1 pitch to right-center. The ball took a bounce and caromed off the wall at the 415-foot mark. Wertz easily scored the tying run, and as Yankees center fielder Joe DiMaggio chased the ball, Evers raced around the bases. As he approached third, DiMaggio’s relay to Yankees rookie second baseman Billy Martin was off-target. Tigers third-base coach Dick Bartell waved Evers home, and Evers scored standing up for his second homer of the game and 12th of the season.

“When he hit that ball in the last of the ninth, every player in our dugout was on his feet,” Kell wrote in the Detroit Free Press. “We knew it was for extra bases when it left his bat. We were screaming, ‘Take three, take three,’ hoping that he’d be in a spot to score on a fly ball.

“But when the relay was wide, he kept going, and I’ll bet he set a record for going around the bases. I never saw anybody run like that, and every guy on the team was running right with him.”

Kell asked Evers about the big hit after the game.

“I just want to sit here for a while and think about it,” Evers said. “A fellow doesn’t have a night like that very often … maybe once in his life and that’s all.”4

The pregame outlook did not suggest a slugfest, at least not for the Tigers. Yankees manager Casey Stengel had Tigers nemesis Tommy Byrne on the mound. Byrne, a 30-year-old left-hander, came into the game with an 8-1 record and was 17-2 since July of 1949. In 14 career starts against the Tigers, Byrne was 11-2 with a 2.83 ERA and three shutouts.

“We know Byrne and the Yankees are always tough on us, but we’re bound to start hitting and getting A-No. 1 pitching again, so I am not too worried,” Rolfe said.5

Rolfe gave the ball to 25-year-old left-hander Ted Gray, a World War II veteran who in five previous starts against New York was 1-1 with a 5.63 ERA. It appeared that, other than being left-handed, the only similarity between the two pitchers was that both were born on New Year’s Eve.

Night baseball was still somewhat of a novelty in Detroit, which in 1948 had become the last American League team to install lights. This was just the fourth night game at Briggs Stadium in 1950 and the 31st overall, and a crowd of 51,400 showed up — the third crowd of more than 50,000 at that point in 1950.

The Yankees scored first as Hank Bauer belted a two-run home run in the top of the first and added a solo shot in the third. After DiMaggio followed with a double, Yankees catcher Yogi Berra smacked a two-run homer to right to give New York a 5-0 lead.

New York second baseman Jerry Coleman sent Gray to the showers with a solo home run in the top of the fourth. Rolfe turned to veteran right-hander Dizzy Trout, a two-time 20-game winner for the Tigers who had started against Washington the night before but lasted just an inning and two-thirds in a 5-2 loss.

This time, Ol’ Diz was on his game, both on the mound and at the plate. He belted a one-out grand slam in the bottom of the fourth for his 18th career home run and second career grand slam. It gave him at least one home run in nine consecutive seasons.

But the Tigers weren’t done in the fourth. Second baseman Jerry Priddy homered to cut New York’s lead to 6-5 and chase Byrne from the game. Right-hander Fred Sanford, who lost 21 games with the St. Louis Browns in 1948, came on in relief for the Yankees, but he failed to retire a batter.

Kell, the 1949 AL batting champion, who came into the game leading the majors with a .371 average, singled and scored on a home run by Wertz — it was the most majestic of the 11 home runs as it bounced off the roof in right field. Evers followed with the first of his two homers to give the Tigers an eight-run inning and a place in the record book.

The four home runs by the Tigers in the fourth inning tied the AL record of most homers by one team in an inning, set by Boston on September 24, 1940.

Trout, who came on in the fourth, retired 11 out of 12 batters to keep Detroit’s lead at 8-6 before DiMaggio homered to left to cut the Tigers’ lead to one. Although it was the second homer in two days and fourth in the past six for DiMaggio, he clearly was not the same hitter known as the Yankee Clipper.

DiMaggio came to Detroit with an uncharacteristic .250 batting average that had been as low as .239 six days earlier. He was just three days removed from collecting the 2,000th hit of his career, making him the third active player with at least 2,000 hits, joining Luke Appling and Wally Moses.

“I haven’t got that feeling that I used to have that I can walk up there and hit any pitcher who ever lived,” he said.6

Trout’s run came to an end in the top of the eighth when Old Reliable Tommy Henrich, pinch-hitting for Coleman, smacked a one-out, two-run homer to give New York a 9-8 lead. It was the 10th home run of the game — tying the major-league record for most combined home runs by two teams in one game — and it ended Trout’s night. Rolfe replaced him with Paul Calvert, who gave up two hits before being relieved by Fred Hutchinson. He got out of the inning with no further damage.

Trout, meanwhile, showered and went to his car to listen to the remainder of the game on the radio. Thinking he might be the losing pitcher two days in a row, he opted to listen to broadcaster Harry Heilmann call the final inning on the radio.

The win went to Fred Hutchinson, another pitcher who was a starter the majority of the time but came out of the bullpen for this game. Hutchinson pitched 1⅔ perfect innings in relief, although he was aided by Evers in the top of the ninth. Evers went back to the fence in left and made a leaping catch of a ball hit by DiMaggio that had a chance to leave the stadium.

Hutchinson, however, did not want to overlook the contributions made by Ol’ Diz.

“If I had my way, Diz,” he said with a slap on the shoulder, “I’d have them give you credit for the game. You deserved it.”7