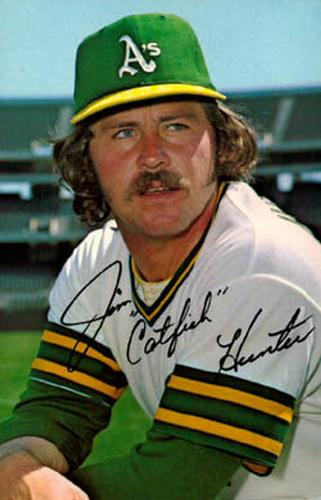 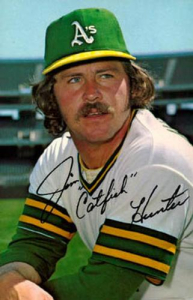 With their awful start to the 1973 season, the Oakland A’s could have been suffering from a case of World Series hangover.1 The A’s had experienced a euphoric season in 1972, when they captured their first-ever World Series title as an Oakland team, and their first since 1930, when the Athletics were in Philadelphia. So it would have been understandable if the 1973 A’s experienced a drop-off.

A crowd of 15,984 showed up on the 23rd in Comiskey Park. It turned out to be a rainy day that incurred two brief interruptions during the game.

With third baseman Bill Melton and center fielder Ken Henderson out with injuries, the White Sox fielded a makeshift lineup that had rookie Bill Sharp in center and utility infielder Hank Allen playing third base in his first start of the season. Jorge Orta was returning to the lineup even though he was still hobbling.

White Sox first baseman Dick Allen, Hank’s brother, had been the American League MVP in 1972. In 1973 he picked up where he left off, blistering the ball until a 12-game stretch without a home run beginning on June 9. Yet he still had an impressive slash line of .329/.409/.658 with 16 homers and 41 RBIs going into the game.

Veteran knuckleball pitcher Eddie Fisher got the start for White Sox manager Chuck Tanner. Catfish Hunter, with nine wins already to his credit, drew the starting assignment for the A’s. Their offense was headlined by Reggie Jackson, who was batting .298 with 13 home runs and 56 RBIs.

The A’s wasted no time in attacking Fisher in the top of the first. He faced only five batters, retiring just one, as Oakland scored three runs on two singles, a walk, a hit batsman, two stolen bases, and a passed ball. Steve Kealey replaced Fisher and stopped the bleeding temporarily.

The White Sox’ attempt to get back into the game yielded a run in the bottom of the inning on Pat Kelly’s leadoff triple, followed by Orta’s sacrifice fly.

But Kealey wasn’t any more effective than Fisher in containing the A’s offense in the second inning. After leadoff singles by Dick Green and Bert Campaneris, a sacrifice bunt by Bill North and a sacrifice fly by Sal Bando plated Green. Jackson’s single scored Campaneris. After Jackson got his second stolen base of the game and Deron Johnson walked, Gene Tenace’s double tallied both, making the score 7-1.

The A’s relied on “small ball” again in the third inning, when they scored three more runs on two hits, two walks, a sacrifice fly, and a fielder’s choice. Denny O’Toole replaced Kealey after the first run of the frame, but all three runs were charged to Kealey.

Orta tagged Hunter with a double, the White Sox’ third extra-base hit of the game, in the bottom of the third, scoring Kelly, who had walked.

O’Toole held the A’s scoreless in the fourth, but with two outs in the fifth inning, Bando singled and Jackson and Johnson hit back-to-back doubles for two more runs.

With the outcome of the game seemingly in hand with a 12-2 lead, the A’s began making substitutions in the bottom of the fifth inning, replacing Tenace, Bando, and Jackson.

In the bottom of the sixth inning, Rick Reichardt’s double was followed by an RBI single by Tony Muser for the third White Sox run.

The A’s added runs in the eighth inning on Green’s single and in the ninth on North’s solo home run for a final score of 14-3. Six of the White Sox’ eight hits off Hunter went for extra bases, including Hank Allen’s first hit (a double) of the season. Hunter’s explanation: His back had stiffened from the time he warmed up before the game to when he first took the mound after the long first inning. “I couldn’t get my pitches down,” he said.2

Every A’s starter got at least one hit in the team’s 19-hit barrage. Ninth-place hitter Green, who had collected three hits the day before, had another outburst with three singles and a double against the battered White Sox staff. Green’s two productive games came after he had been benched for 13 days. He was sarcastic about his recent performance: “I’ve always hit well in spring training, which might prove I might need a rest every now and then. Heck, play me one week and rest me three.”3

The heart of the A’s lineup accounted for 10 RBIs, with Johnson and Jackson each driving in three and Bando and Tenace each having two.

The teams combined for 10 doubles and a triple. The only home run of the game was hit by North, who was not normally regarded as a power hitter. It was his second of the season, and apparently he wasn’t expecting this one either. A recent convert to switch-hitting, North knocked the homer into the right-field seats as he batted left-handed. “When I hit it, I had no idea it was going out,” he said. “I thought maybe it would be a triple or something. I was running so hard I lost my batting helmet.”4

At the end of the day, the White Sox, A’s, and Royals were in a virtual tie for first place, separated by only .005 percentage points, and the Twins and Angels were only a half-game out of first.

As a sidelight to the game, a White Sox security guard added injury to insult for the local team when he accidentally shot himself after the game while removing his revolver from its holster in the locker room.5

The A’s took sole possession of first place six days later. In a close division race with Kansas City, they wound up holding first place for the almost all of the rest of the season. The A’s took the division title and ultimately claimed their second consecutive World Series championship. They would accomplish a rare “three-peat” in 1974.

Hunter won 21 games for the third consecutive season. The future Hall of Famer was one of three A’s hurlers with 20 or more wins in 1973. (Vida Blue won 20 and Ken Holtzman won 21).

Dick Allen went on the injured list after June 28 with a hairline fracture in his right leg and missed most of the rest of the season. His absence severely hindered the White Sox’ ability to remain in contention. They finished 17 games behind the A’s.

The 1973 National SABR Convention was held in Chicago June 22-24, 1973. Attendance at the A’s-White Sox game was one of the activities. The convention took place at the Sheraton-Chicago Hotel with 23 or, depending on the source, 26 attendees. The cost was $15 for a single room and $20 for a double. Negro Leaguer Dave Malarcher was the guest speaker.6