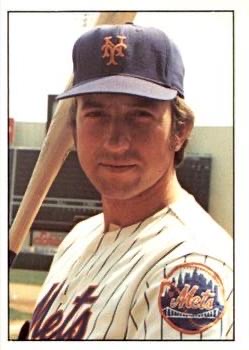 Except for World Series appearances in 1973 and 1979, John Milner’s career was relatively quiet. However, he seemed to have a propensity for hitting grand slams, collecting a total of 10 during his 12-year career (tied for 64th on the all-time list). One of those slams occurred on June 26, 1976, when he helped the New York Mets outpace the Chicago Cubs at Wrigley Field.

The Mets were three years removed from their World Series loss to the Oakland Athletics. Milner had been the starting first baseman on that team, contributing 23 home runs and 72 RBIs. In 1976 the Mets were briefly in contention for first place during the early part of the season, but by May 19 they were in third place, where they would remain for the rest of the season.

It had been 31 years since the Cubs had participated in postseason play. The 1976 season would be no different, as the Cubs were in fourth place coming into the game, already 18 games back of the first-place Philadelphia Phillies.

Cubs manager Jim Marshall had taken over the club in late July 1974, but he had yet to record a winning record. He went with Bill Bonham as his starter. Bonham was in his sixth season with the team, having lost 37 games in the prior two seasons. With a 6-3 record and 3.39 ERA coming into the game, it appeared he was emerging as a reliable starter.

Milner had been angry with Frazier during the previous game, lifting him for a pinch-runner because he failed to reach second base on a dropped popup. But Milner’s one-on-one meeting with Frazier, at teammate Joe Torre’s urging, cleared the air before the game.1 He made an emphatic return to the lineup with the third grand slam of his career and the first of three in 1976.

The Cubs put up the first score when outfielder Rick Monday led off the bottom of the first inning with a home run off Koosman.

Bonham retired the Mets in order in the first two innings, but he ran into trouble in the top of the third. After a single by Jerry Grote, Bonham walked Koosman and Mike Phillips to load the bases. Grote then scored the Mets’ first run on a single by Felix Millan. Milner put a nail in the Cubs’ coffin early when he cleared the bases with a grand slam, his ninth homer of the season. Dave Kingman immediately followed with his 25th home run of the season off a Bonham curve that made its way onto Waveland Avenue to make the score 6-1. Bonham was lifted with one out, giving way to Paul Reuschel. Cubs catcher Steve Swisher attributed Bonham’s poor showing that inning to starting to aim the ball. Marshall said of Bonham’s short stint, “It was his first bad outing in a while.”2

The Mets loaded the bases off Reuschel in the top of the fifth inning. Rookie Bruce Sutter entered the game in relief for the seventh consecutive game and served up a single to Ed Kranepool that plated Phillips and Millan.

Koosman gave up his second hit in the bottom of the fifth, and then allowed his second run in the sixth on a walk to Monday, a single by Jose Cardenal and a sacrifice fly by George Mitterwald.

The Mets added their ninth run in the seventh inning when Kranepool singled and Del Unser tripled off Mike Garman.

Koosman loaded the bases in the bottom of the seventh on three walks and was replaced by Bob Apodaca, who struck out Monday looking to end the inning. After the game, Frazier explained, “It was hot out there and I thought Jerry was getting a little weak. No use abusing him. And besides, Apa’s been steadily getting better all the time.”3

Oscar Zamora pitched in the eighth for the Cubs and yielded the final Mets run on a solo home run by Phillips, who had hit for the cycle the day before. The final score was 10-2.

The Mets collected 13 hits in the game. Every position player recorded at least one hit; Millan led the way with three.

Koosman held the Cubs to three hits while recording his seventh win of the season. The roller-coaster ride would continue for him, as his victory was the start of another personal five-game winning streak. He finished with 21 wins and finished second in the Cy Young Award voting to Randy Jones of the San Diego Padres. Koosman headlined the Mets’ pitching staff that led the league in ERA (2.94) and WHIP (1.150).

Five days after the Cubs rout, Milner hit another grand slam, against St. Louis, and added his third of the year on September 27 against the Montreal Expos. He had one of the best seasons of his career, with 15 home runs and a career-high 78 RBIs while posting a slash line of .271/.362/.447.

Kingman’s 37 HRs for the season ranked him second in the National League.

The Mets’ victory over the Cubs came during a 10-game winning streak. The streak improved their standing in the NL East Division by only two games. They finished the season in third place, 15 games behind first-place Philadelphia. The Phillies lost to Cincinnati’s Big Red Machine in the National League Championship Series.

The Cubs finished fourth in the division, 26 games behind the Phillies, and Marshall was replaced after the season with Herman Franks. The team’s futility continued until 1984, when they won the division title and appeared in the postseason for the first time since 1945.

The 1976 SABR Convention was held in Chicago on June 25-27. Attendance at the Mets-Cubs game was one of its activities. Forty-five members attended the convention, held at the Howard Johnson Motor Lodge. The convention committee was led by Emil Rothe and Bob Soderman with assistance from Eddie Gold, Bill Loughman, and Stan Grosshandler. Former major leaguer Lew Fonseca was the banquet speaker, and the treasurer’s report listed the SABR’s assets at $1,150 at convention time.4