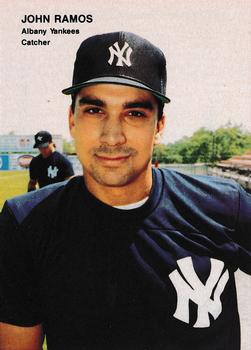 In 1988 the Albany-Colonie Yankees of the Double-A Eastern League finished fourth in the league standings, but successfully defeated the Glens Falls Tigers and Vermont Mariners in successive rounds of the playoffs, needing only four games in each round of the best-of-five playoffs and finals.

The June 26, 1989, game pitted the defending Eastern League champion Yankees against an All-Star team made up of the best players from the other seven Eastern League clubs. Buck Showalter managed Albany-Colonie and Bob Molinaro of the Canton-Akron Indians managed the All-Stars. The Yankees were dominating in 1989, comfortably in first place. “We’ve got a Triple-A team here,” bragged Yankees catcher Jim Leyritz. “These guys playing here, you put them in any other organization and you’d have three or four in the major leagues and four or five in Triple A.”1 They were the team to beat. (They ultimately finished the 1989 season a full 19 games ahead of second-place Harrisburg Senators.)

The game was played at Heritage Park in Colonie, New York. Weather presented a challenge and the start of the 7:05 P.M. game was delayed for 30-45 minutes because of rain. The rain also depressed the turnout. Some 1,980 fans attended. They were rewarded with a good and entertaining game.

The starting pitchers were Rickey Torres for the Yankees and Jeff Shaw (Canton-Akron Indians) for the Eastern All-Stars.2 The All-Stars batted first and after Torres retired the leadoff batter, second baseman Kevin Burdick (Harrisburg) homered over the left-field fence for a 1-0 lead.3 In the top of the second, the All-Stars added two more runs. Jeff Banister of Harrisburg drew a two-out walk. He scored on a single to center by Travis Fryman (London Tigers). The Times-Union story is a little unclear how the third run scored, writing that “Reading’s Frank Bellino singled, and scored when – while stealing third – the throw from Leyritz got away from [Hensley] Meulens.”4 In any event, the score was 3-0, All-Stars, after 1½ innings.

The Yankees scored once in the bottom of the second when Rob Sepanek hit a two-out home run.5

Neither team scored in the third, fourth, fifth, or sixth innings, though Molinaro had by then already gone through four pitchers (in the spirit of letting his pitchers have the opportunity to pitch in the league All-Star Game.) Showalter was on this third pitcher through 6½.

In the bottom of the seventh inning, the Yankees tied the game, 3-3. Leyritz reached on an infield single and Meulens homered off Williamsport’s Mark Wooden.

Neither team scored in the eighth or ninth, and the game went into extra innings. Hipolito Pena had pitched a scoreless top of the ninth for the Yankees and did the same in the 10th.

Molinaro had now gone through all of his pitchers, so he turned to pitching coach Eric Rasmussen. After the game, Rasmussen said, “I was walking back from the dugout and he said warm up. I thought he was talking to someone else.”6

Nope. He was talking to Rasmussen, age 37, who had last pitched for Triple-A Rochester back in 1987. Rasmussen borrowed Fryman’s glove, borrowed spikes from Leo Gomez, and borrowed a protective cup from Jason Grimsley. He managed to pitch the 10th without giving up a run, striking out Mitch Lyden and Tim Becker and getting Scott Shaw to ground out.

Before the 11th began, writes Michael Mackay, “Both teams had agreed that if the game went beyond 11 the game would be declared a tie as both teams had run out of pitchers.”7

Pena held the All-Stars scoreless again in the top of the 11th. Fryman took his glove back so Rasmussen borrowed Grimsley’s. It was on that glove that he blamed his fate. With one out, Jason Maas singled to center field. Oscar Azocar then grounded out to second base and the teams were one out away from the game being declared a tie. But John Ramos was sent in to pinch-hit for Pena. The first pitch was outside, a ball. The second pitch was hit into center field and scored Maas with the winning run. “I was looking fastball,” said Ramos, named the game’s MVP despite seeing a total of two pitches. “That’s what happens when you get a washed-up pitcher facing a washed-up catcher,” Yankees pitcher Scott Kamieniecki said, needling Ramos.8

Thanks to Bill Rosario of the Eastern League for sending information about the game and to SABR member Michael Mackay for sending material gleaned in a visit to the Albany Public Library.

2 Torres played eight seasons in the minor leagues, but never made it to the majors. Shaw pitched for the Cleveland Indians starting in 1990 and worked in 633 big-league games over 12 seasons, mostly as a closer.

3 Burdick had a 3-for-5 day, the best on both teams. He devoted five seasons to playing minor-league baseball but advanced no further.

4 According to the box score, Fryman did not have a run scored, but Bellino did, leaving a bit of a question as to what happened to Fryman, and how Bellino ended up on second to be in a position to steal third.

5 Sepanek spent seven seasons in the minors, with 45 games for Triple-A Columbus in 1990.