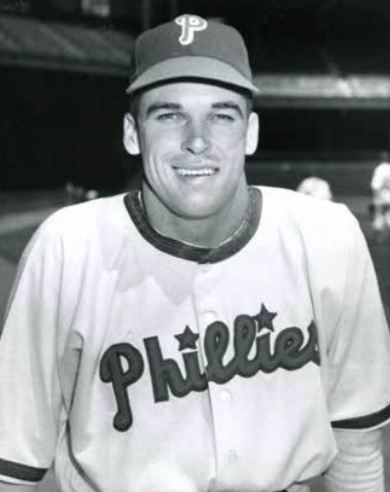 The Whiz Kids got only three hits but scored three runs in beating the Boston Braves 3-2 in a night game at Braves Field. Before a crowd of 13,361, Dick Sisler almost single-handedly secured the Phillies’ victory, a battle of left-handers featuring Boston’s All-Star pitcher Warren Spahn and Philadelphia’s 21-year-old Curt Simmons. Going into the game, the Phillies, at 34-24, were in second place in the National League standings, trailing the Brooklyn Dodgers by just a half-game. (Philadelphia had been in first place for the first week of June, but had slipped a bit.) The Braves (32-27) were in fourth place, three games behind the Dodgers. (The St. Louis Cardinals were in third place, one game behind Brooklyn.)

Both southpaws retired the sides in order in the first inning. In the top of the second, Sisler scored the first Philadelphia run. After Spahn struck out Del Ennis and Willie Jones, Sisler drew a four-pitch walk. With Andy Seminick batting, Spahn uncorked a wild pitch (his sixth of the season), and Sisler advanced to second base. Seminick then hit a ground-rule double down the right-field line, scoring Sisler. Spahn, still a bit wild, walked Jimmy Bloodworth but then struck out Simmons to end the inning. Spahn struck out the side but gave up two walks and threw a wild pitch, in addition to the double.

Boston responded in its half of the second. With one out, Luis Olmo and Tommy Holmes had infield singles, and Gene Mauch singled to right field, driving in Olmo. Holmes moved to third on an error by Phillies right fielder Ennis. Buddy Kerr’s sacrifice fly gave the Braves a 2-1 lead.

Spahn settled down and displayed his mastery, retiring the Phillies in order in the next four innings. Simmons kept pace, scattering two walks and two singles in four frames against the Braves. He received some defensive help with a Boston runner caught stealing and a double play. After six innings, Boston was clinging to a 2-1 lead.

In the top of the seventh, Ennis flied out to center, bringing Spahn’s streak of batters retired to 14. But Jones coaxed a walk and then Sisler came to bat again. He hit a drive that “just slipped into the right field bullpen.”1 The 319-foot drive “wrapped up the verdict for the visitors.”2 Seminick walked but was stranded on the bases. Through seven innings, Spahn had allowed three runs on just two hits. Eddie Waitkus singled off Spahn with two outs in the eighth inning for the Phillies’ third and final hit of the game, but was left on base.

Bob Elliott batted for Spahn in the bottom of the eighth and flied out to center. Roy Hartsfield singled and Sam Jethroe walked, and the Braves were threatening with just one out. The young left-hander Simmons worked his way out of the jam with a strikeout and an easy fly ball to center. The Braves’ Bobby Hogue pitched a three-up, three-down ninth.

The bottom of the ninth was a chess match played by the two managers. After Philadelphia shortstop Granny Hamner threw out Olmo, Dick Whitman replaced Sisler in left field. Holmes singled off the tiring Simmons, and skipper Eddie Sawyer summoned Jim Konstanty to the mound.  Boston manager Billy Southworth sent in Sibby Sisti to run for Holmes and brought Sid Gordon in as a pinch-hitter for Mauch. Konstanty struck out Gordon. Willard Marshall pinch-hit for Kerr, and flied out to right to end the game.

The New York Times noted that Jim Konstanty “made his twenty-seventh relief appearance in the last of the ninth to save southpaw Curt Simmons’ ninth triumph of the season.”3 The save did not become an official statistic until 1969, but under present-day rules, it was Konstanty’s eighth save of the season.

Warren Spahn lost his eighth game of the season, despite allowing the Phillies only three hits. The Boston left-hander struck out seven Philadelphia batters, raising his National League-leading strikeout total to 95. Lifted for a pinch-hitter in the eighth inning, Spahn fell short of pitching his 14th complete game of the season. At this point in the season, Boston had lost nine one-run games. The offensive bright spots were Tommy Holmes’s 3-for-4 performance at the plate, which raised his batting average to .385, and Roy Hartsfield’s 2-for-3 with a walk in the leadoff position. Boston left six runners on base, Philadelphia left four. The Boston Globe commented that the Braves, “battling their southpaw jinx again without the services of their long-ball hitting right-handers, Bob Elliott and Sid Gordon, could garner only two scores” off Simmons.4 Both sluggers were used as pinch-hitters late in the contest.

Curt Simmons proved equal to the task against Warren Spahn. He gave up seven hits, walked three, and struck out six as he pitched into the ninth inning. His season record improved to 9-5. Simmons had pitched in relief just two days earlier, against the Chicago Cubs.  In only one-third of an inning, he had been roughed up, allowing four runs (two earned) on three hits and an error. It had been his third relief appearance of the season, and all three occasions were games that had been part of doubleheaders.

The victory over Boston moved the Phillies into first place, a half-game ahead of the St. Louis Cardinals. (The Brooklyn Dodgers also lost on June 27.)  Philadelphia had a 30-16 record in one-run games in 1950.

In addition to the sources mentioned in the notes, the author consulted baseball-reference.com and retrosheet.org. The author thanks Lisa Tuite of the Boston Globe for her assistance with obtaining sources.