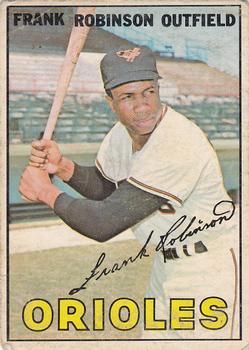 The visiting White Sox (40-26) were leading the American League by 4½ games over Detroit. The Orioles at 32-35 were tied for seventh, 8½ games back.

Joe Horlen (8-1, 2.14 ERA) took the mound for the White Sox. He, too, had made 13 starts but his 71 hits allowed well exceeded his 18 walks. Paul Blair greeted him with a double to right. Mark Belanger sacrificed Blair to third but he was stuck there when Frank Robinson and Boog Powell both grounded out.

All Barber allowed in the second was a one-out double to Ron Hansen. Tommy McCraw struck out, then Pete Ward was out on a foul pop, leaving Hansen at second. Horlen induced three more groundouts in the bottom of the frame.

Duane Josephson opened the top of the third with a single to left field. Horlen bunted him to second. However, the White Sox were unable to capitalize on the runner in scoring position: Al Weis grounded to third and Dick Kenworthy flied out to center. In the bottom of the frame, Horlen struck out the opposing pitcher and then induced two more groundouts for a 1-2-3 inning.

The top of the fourth was another quick frame. Ken Berry reached when Frank Robinson in right dropped the ball after catching it. That was Robinson’s first error in 99 games, dating back to the previous August 25.2 Berry was erased when Tommie Agee grounded into a 5-4-3 double play. Hansen grounded out to end the inning with the score still a pristine 0-0.

The memorable events of the game occurred in the bottom of the fourth. Frank Robinson singled to left. Brooks Robinson grounded toward third base. Frank ran hard toward second: Trying to avoid a double play, he slid hard into second baseman Weis as he forwarded the ball to first. Despite wearing his batting helmet,3 Frank hit Weis’s knee hard enough to knock himself out and knock Weis off the base. Weis had managed to throw the ball to first before falling but not in time to beat Brooks. As their teammates congregated around the injured Weis and the unconscious Frank, right fielder Berry called for the ball from first baseman McCraw and tagged out Frank since he was lying on the field not in contact with the base – and no one had called time. Umpire Nestor Chylak had ruled that Weis came off the bag too soon, so Frank was not out on the original throw from the third baseman. The slide at least had been effective to avoid the double play since Brooks reached first safely. This play resulted in an unusual line in the play-by-play: Groundout: 3b-2b-1b-rf/Force out at 2B.

Weis eventually managed to get up and limp off the field. He required surgery to repair ligaments in his knee and was out for the season.4 He was replaced at second by Jimmy Stewart.

A stretcher was brought out for Frank Robinson but he came to and managed to leave the field with assistance.5 When he came to he wanted to go back into the game, but his answers to the standard questions indicated that he was definitely suffering from a concussion. When asked where he was, he responded UCLA; when asked what day it was, he responded “A good day to play baseball.” He was taken to the hospital for observation.6 Russ Snyder took his place in right field. He was out for a month, and the concussion had long-term consequences for him resulting in double vision.

Returning to the game action: Boog Powell singled to advance Brooks to second. Curt Blefary then reached when Stewart bobbled the ball to load the bases. The Orioles could not take advantage, though, as Luis Aparicio grounded into a 6-4-3 double play.

The White Sox broke through in the top of the fifth inning. Barber, who had been solid so far, reverted to his wild side. First he walked McCraw, who then stole second. Although he struck out Ward, he threw a wild pitch to Josephson, allowing McCraw to advance to third. Josephson reached safely, although the play was scored as a fielder’s choice so he was not credited with a hit. The Orioles did not get an out: Second baseman Belanger’s throw to the plate was not in time. Another wild pitch, this time to Horlen, allowed Josephson to advance to second. Josephson scampered to third on Horlen’s fly out to right, then scored on Stewart’s two-out single. Barber would have been out of the inning on Kenworthy’s attempted hit-and-run, but Stewart scored from first when Blefary first fumbled the ball, then threw to second not noticing that Stewart had a green light from third-base coach Grover Resinger.7 The first baseman dropped a potential foul pop for another error but that one proved harmless as Berry flied out to the shortstop to finally end the inning. The score was three runs for the White Sox, two errors and two wild pitches for the Orioles.

All the Orioles could muster in the bottom of the fifth was a single by Vic Roznovsky. The sixth inning passed almost as quickly: The White Sox managed only a walk and a stolen base against the new pitcher Jim Hardin, and the Orioles were out 1-2-3.

Josephson opened the top of the seventh with a single, but was caught stealing second. A strikeout and a fly out completed the half-inning. Horlen continued his effective outing in the bottom of the frame with another 1-2-3 effort.

The White Sox padded their lead in the top of the eighth. Kenworthy singled and was replaced by Don Buford as a pinch-runner. Buford was up to the task: He stole second, then scored on Berry’s single. That was all for the White Sox, though: Hardin buckled down and induced two strikeouts and a groundout to hold the score at 4-0, White Sox.

It looked as if the Orioles might get something going in the bottom of the eighth when Davey Johnson drew a walk. But Blair and pinch-hitter Andy Etchebarren both flied out, leaving the inning to Snyder. He singled to center, allowing Johnson to take third. But he was left there when Brooks Robinson flied out.

Eddie Fisher took over the pitching for the Orioles in the top of the ninth. He started by allowing back-to-back singles to Ward and Josephson. Horlen earned his first RBI of the year with his sacrifice fly.8 A groundout and a fly out ended the White Sox’ scoring opportunities with the score 5-0 in their favor. The Orioles went quietly in the bottom of the ninth, although Aparicio reached on an error.

The loss of Frank Robinson’s team-leading bat midway through the game may have contributed to the Orioles’ lack of run production, although the White Sox also boasted that they had “a book on Frank” that allowed them to neutralize him.9

The Orioles crept up to sixth in the AL by the end of the season, finishing 15½ games back of Boston. The White Sox held a share of the league lead as late as September 6 but ultimately finished fourth, three games back, after a five-game losing streak in the last week of the season.

1 Barber only made one more start with the Orioles. On July 4 he was traded to the New York Yankees for players to be named later, Ray “Buddy” Barker, and $20,000 cash. There had been some friction between him and the Orioles. Bill Tanton, “Last Kiddie Korpsman, Barber, Leaves Birds,” Baltimore Sun, July 5, 1967: C6. His statistics did not improve with the Yankees.

2 Frank Robinson was charged with only one other error in 1967.