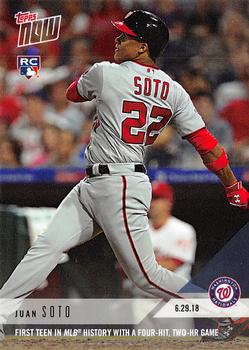 The Washington Nationals (41-38) had been leading the NL East division at the end of May, but an 8-15 record in June so far had moved them back to the third position, four games behind Atlanta, two games behind the Philadelphia Phillies (43-36).

Nick Pivetta (4-6, 4.06 ERA) took the mound for the Phillies. He was a former National; the Phillies had acquired him in return for Jonathan Papelbon in 2015. Adam Eaton greeted him with a single to right. Trea Turner then blasted one a dozen rows deep into the left-field seats to give the Nationals an early 2-0 lead. After Bryce Harper struck out, Anthony Rendon cruised into second with a double off the base of the left-field wall. Left fielder Juan Soto followed with a homer just into the seats to the left of the 374-foot marker, doubling the Nationals’ lead. The 19-year-old Soto had debuted just over a month earlier, called up from Double A when Howie Kendrick went down with a torn Achilles tendon. Since then, Soto had a .318 BA and 6 home runs, including a two-homer game against the Yankees in New York that brought him to national attention.1 Mark Reynolds flied out but Wilmer Difo reached on a slow infield single. That triggered a visit from the pitching coach Rick Kranitz. Whatever he said worked: Pivetta struck out Spencer Kieboom for the third out.

Eric Fedde (0-3, 5.32 ERA) made his fifth start of the year for the Nationals still looking for his first major-league win. At least his catcher would be familiar: Kieboom had caught him in the minors earlier in the year. César Hernández singled, then advanced to second when Soto made his first major-league error: he missed the catch, fell on his backside, then got up to chase the baseball. After Rhys Hoskins grounded out, Odúbel Herrera flied out to the warning track, allowing Hernández to advance to third. Carlos Santana walked but Scott Kingery grounded out to end the threat.

Fedde brought his .000 BA2 to the plate at the top of the second and preserved it by tapping back toward the mound. Eaton grounded out to first. Turner walked, then stole second on a 2-and-2 pitch to Harper — who ended up walking as well. Rendon homered, bringing the score to 7-0 Nationals. By then the boos were echoing through the park. Soto hit a slow roller up the first-base line: Pivetta couldn’t get a handle on the ball so Soto was safe. That was enough for Phillies manager Gabe Kapler, who pulled Pivetta for Yacksel Ríos. Pivetta left to a chorus of boos. Ríos managed to end the half-inning by striking out Reynolds. All the Phillies got in the bottom of the second was a two-out double by Andrew Knapp. Ríos, making his second-ever plate appearance, changed his stat line from 0-for-1 to 0-for-2, leaving Knapp at second.

Ríos worked a 1-2-3 top of the third. Although Hernández walked to start the bottom of the frame, Hoskins flied out and Herrera grounded into a 4-6-3 double play to end the inning.

Eaton worked a walk to open the fourth, followed by a Turner base hit. That put two on for Harper, who hit his league-leading 20th homer well into the left-field seats. The pocket-sized fielding positioning cards the Phillies fielders consulted for each batter didn’t help much given all the balls going over the wall. Austin Davis started warming in the Phillies bullpen. After Rendon lined out, Davis came in for Ríos. The first batter Davis faced was Soto, who grounded back toward the mound but won the footrace to beat Davis to first. Davis eventually got the two outs he needed, but not before giving up a run-scoring double to Difo, bringing the score to 11-0, Nationals.

The Phillies got on the board in the bottom of the fourth. Santana opened with a base hit followed by a Kingery double. Soto got the ball in quickly enough to hold the runners at second and third. Cozens walked to load the bases. After a visit from pitching coach Derek Lilliquist, Fedde got Franco to ground into a double play but a run scored. Knapp knocked one up the middle to score another run. Davis matched Ríos’s 0-for-2 as a hitter by striking out to end the inning with the score 11-2, Nationals.

Back on the mound, all Davis allowed in the top of the fifth was a walk to Eaton. Fedde appeared to be tiring in the bottom of the fifth as he allowed three more runs. After Hernández doubled, Hoskins homered on the 14th pitch of the at-bat, scoring two. After a groundout and a fly out, Kingery homered for the third run. Fedde got Dylan Cozens to strike out looking and, after 115 pitches, he walked off the mound in line for his first major-league win.

Rendon opened the sixth inning with a double, then advanced to third when Davis balked. After Soto struck out, Reynolds hit a sacrifice fly to right: Rendon slid safely across the plate. Kapler brought in Víctor Arano to face Difo, who flied out to end the top of the frame. Matt Grace took over the pitching for the Nationals and worked a 1-2-3 bottom of the sixth.

Arano created, then escaped, a jam in the top of the seventh. Kieboom dropped a single into center. After Brian Goodwin struck out, Eaton tapped a seeing-eye single into left, evading the shift. Turner flied out, bringing up Harper. Kapler brought in lefty Zac Curtis to face Harper, who walked to load the bases. Curtis escaped the jam when Rendon struck out swinging.

Tim Collins came in to pitch the bottom of the seventh. He jammed Hernández, who flied out to Harper in center. After Collins walked Hoskins, Herrera was thrown out on a dribbler in front of the plate. Santana pulled the Phillies closer by homering almost to the concourse: 12-7, Nationals. Kingery singled but Jesmuel Valentín tapped back to the mound to end the inning.

Hector Neris (5.59 ERA) took the mound for the top of the ninth. He had started the year as the Phillies closer, but as his ERA crept over 4, he was used instead as a set-up man in the seventh or eighth inning. This outing did not go well: It added over a run to his ERA, which increased to 6.90. Goodwin started by homering on his first pitch. After Michael A. Taylor lined out, Turner blooped a hit into left. A walk to Harper triggered a mound visit by the pitching coach and trainer, but Neris stayed in. Rendon struck out. Soto stepped in, facing Neris for the first time. He homered 422 feet into the shrubbery in the batter’s eye in center. Reynolds followed with a 449-foot blast to the upper deck in left field. The two fans in that section scrambled for the ball as the boos rained down in Philly from the crowd of 36,903. Because of the postgame fireworks, most of the fans had stayed despite the score. Difo struck out to end the Nationals’ homer-fest with the score 17-7, Nationals.

Justin Miller closed out the game for the Nationals with a popup, a flyout and a strikeout looking, allowing the remaining fans to focus on the fireworks in the sky rather than the visiting team’s fireworks on the field.

Soto became the first teenager in major-league history to collect four hits and two home runs in one game. He was also the fourth teenager to also have two multi-home run games. The others were his teammate Bryce Harper, Mel Ott, and Ken Griffey Jr .3

Fedde was given the game balls and lineup card to memorialize his first major-league win.4

The ball below was pitched by Pivetta to Soto in the second inning (author’s collection, acquired from Phillies Authentics the day after the game).