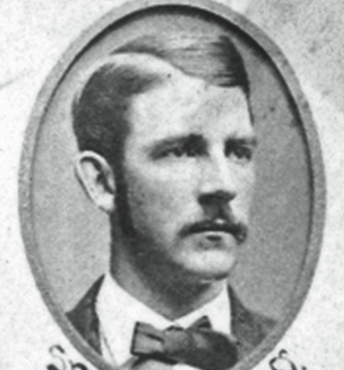 Boston won every one of its 37 home games, and went 34–8 on the road. The Red Caps started the season with a 26–0–1 record, not losing a single game until June.

Boston’s dominance in 1875 was no surprise, for the team had won National Association championships in 1872, 1873, and 1874 with a cumulative record of 134 wins and only 42 losses. The Red Stockings possessed four future Cooperstown selectees—catcher   Jim “Deacon” White, outfielder Jim O’Rourke, pitcher Al Spalding, and shortstop George Wright—in the starting nine. A fifth Hall of Famer, George Wright’s brother Harry Wright, was the manager. Much of the rest of the Boston lineup— notably second baseman Ross Barnes and first baseman Cal McVey—were considered among the game’s elite.

The streak began with a 6–0 Opening Day shutout at home against New Haven. The Red Stockings outscored the Washington Nationals 54–7 in a three-game series, and by May 11 they were 11–0, Spalding having won all 11. Their other pitcher, Jack Manning, didn’t start a game until the 12th game of the season—but he won, too. On May 27 in front of 5,000 people in Philadelphia, the Red Caps’ win streak finally ended in a 3–3 tie.1

Boston beat the Mutuals of New York May 28– 29, the latter their 24th win against the lone tie. Few of the games had been close. To that point, Boston had scored 288 runs and allowed only 74. Al Spalding was 22–0 and already a 20-game winner.

The team headed out by train to St. Louis, to play the Brown Stockings on June 2. Spalding won 10–3 in front of 6,000 who flocked to Grand Avenue Park. The Boston Globe headline the next morning ran in Latin: BOSTON OMNIA VINCIT (Boston Conquers All).

Spalding planned to pitch the next day against the other St. Louis team, the Red Stockings (also known as the Reds), who figured to be easy. It was their first, and only, year in the National Association, and they had played just nine games, winning just two of them. Even within St. Louis itself, the Reds were the second team. The Brown Stockings, also playing their first season, were the local favorites, eventually finishing fourth at 39–29. The St. Louis Reds would wind up 10th at just 4–15.

Charlie Sweasy, a 27-year-old second baseman who doubled as the Reds manager, selected righthander Joe Blong to face Spalding. Blong got a rough greeting. Boston scored three runs on three St. Louis errors and a McVey double in the top of the first.

The Red Sox (so the St. Louis team was dubbed in the Boston papers—the Globe, Herald, and Advertiser) scored one in the second and another in the third. But Boston put up a fourth run in the top of the fourth, and added a decisive four more in the top of the fifth. Barnes singled and O’Rourke drove a hard-to-handle ball through third baseman Joe Ellick.  Andy Leonard tripled, McVey singled, and Spalding doubled. The Reds came back with two of their own in the bottom of the inning on three hits and had the bases loaded with one out. But George Wright’s fielding produced a force out at home plate, and a second force out halted the rally. Boston added a run in the sixth, St. Louis one in the eighth, and then Boston put up a final run in the top of the ninth that made the score 10–5. Boston had run its record to 26–0. 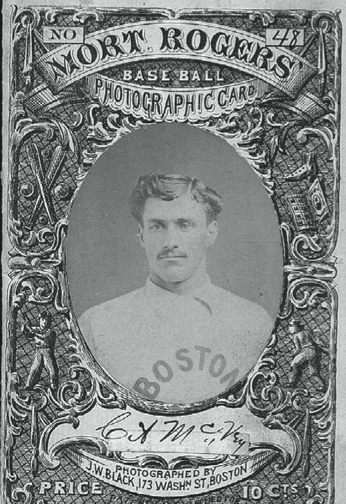 Spalding was far from his best. The Bostons were outhit for just the second time all year, 13–12. The correspondent for the Advertiser wrote that while Boston prevailed, “it was not by any very brilliant display at the bat or in the field.” They’d won the game “by their superior base-running and the many errors of their opponents.”2

Those errors mounted up, with Boston making six of them (three by Spalding) and St. Louis committing 16. St. Louis catcher Silver Flint made six all by himself. There were so many errors that the onscene accounts differ. The St. Louis Republican box score claimed Boston had committed seven errors and the Red Sox had committed 19, with just one earned run by each team. The Daily News had eight Boston errors and 14 by St. Louis.

Boston catcher White had no errors, but did have to leave his position in the sixth inning after injuring his thumb. He didn’t leave the game; his finger was “straightened and tied up in a rag” and he moved to right field the following inning.3

Crowd estimates ranged between 1,000 and “at least” 2,000 reported by the Republican. That newspaper conceded that interest might have been lessened because “[I]t was looked upon as a foregone conclusion that the Bostons would achieve an easy victory.” The newspaper added that “the ‘striplings’ … gave them a good game.”4 The Daily News described the losers as “not nearly so badly defeated as they themselves expected to be.”

The win boosted Spalding to 23–0 for the season. He eventually won 54 games in the 79-game schedule, if one can call it a schedule when some of the games were really arranged as the weeks passed by.

Despite Spalding’s staggering statistics in wins and losses, Boston’s success was primarily due to offense. Their .321 team batting average ranked far above the second-place Athletics at .290, who were in turn well above the .260 average shared by the Chicago White Stockings and Hartford. Boston also led in on-base plus slugging, .737 to .677 for the Athletics. The team 1.87 ERA was good enough to rank fourth in the league. Boston’s .870 fielding average ranked third.

The Red Caps (with catcher White in a hospital) finally lost on June 5, the Brown Stockings defeating Spalding 5–4. The Advertiser headline read: THE BOSTONS MEET A WATERLOO AT LAST.

This essay was originally published in “Inventing Baseball: The 100 Greatest Games of the 19th Century” (SABR, 2013), edited by Bill Felber. It also appears in “Boston’s First Nine: The 1871-75 Boston Red Stockings” (SABR, 2016), edited by Bob LeMoine and Bill Nowlin.

1 Boston was 22-0 when they saw the May 24 game end in a tie. But it wasn’t a fair tie. Boston scored three runs in the top of the 10th, taking a 6-3 lead. The first two Athletics hit safely in the bottom of the 10th, but then a play happened on which accounts differ. Boston argued that Cap Anson had shoved second baseman Barnes and should be ruled out for interference. Umpire William McLean agreed, and so did the Athletics after some discussion. As Anson was leaving the field, he “made some remarks” and the umpire walked off the field. The crowd flocked onto the field and play was impossible, so McLean called the game – rather than forfeit it – and it reverted to the tie it had been at the end of nine. Boston Herald, May 28, 1875.

2 Boston Advertiser, June 4, 1875. Perhaps unsurprisingly, accounts vary from newspaper to newspaper. The Daily Times box score, for instance, showed 12 hits for each team and had St. Louis scoring its first run in the first inning, not the second.

3 The quotation about the treatment of the finger comes from the Daily Times. Bill Ryczek offers a note from the New York Clipper of June 12, 1875, which says that White subsequently had to be hospitalized for a week. “McVey is a fine catcher, but not Jim White – for James stands alone,” declared the Clipper. The book Blackguards and Red Stockings by William J. Ryczek (Wallingford, Connecticut: Colebrook Press, second printing 1999) provides an invaluable history of the National Association.