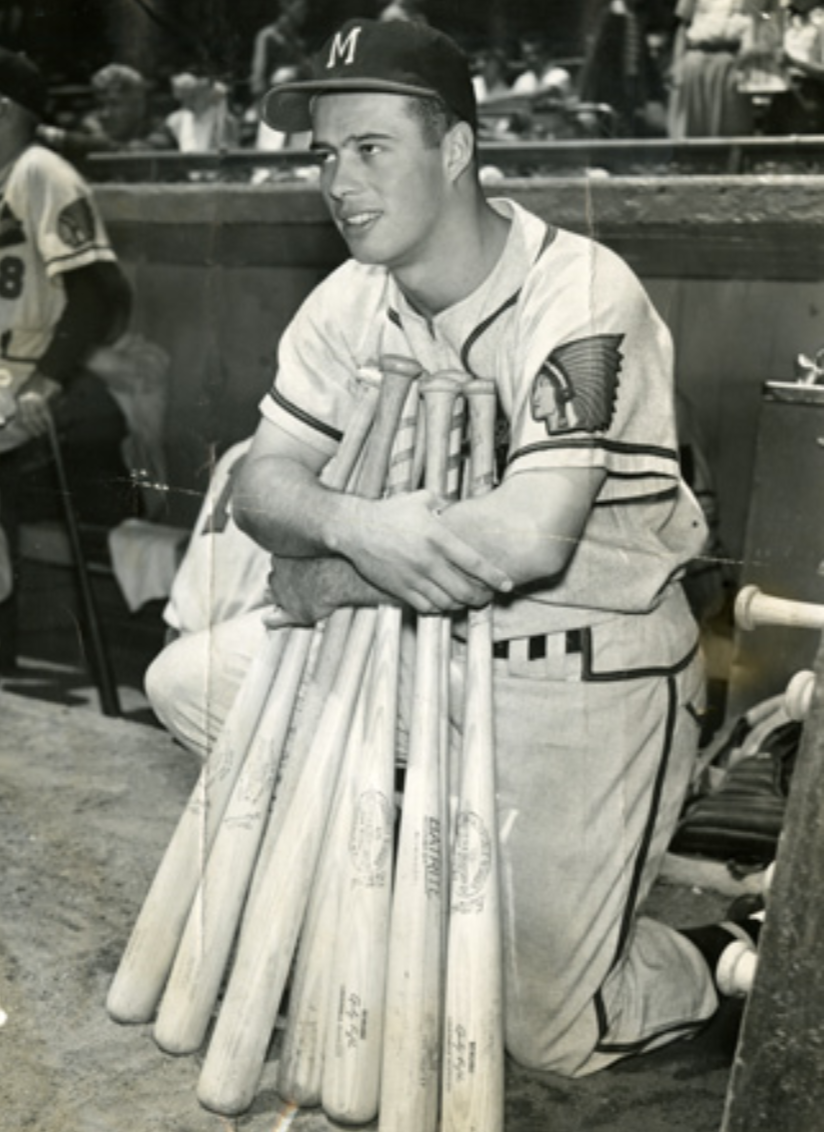 When the gates opened at County Stadium on June 30, 1957, Milwaukee’s beloved Braves had the rest of the National League in their rear-view mirror, although teams were definitely as close as they appeared, with four teams within 3½ games of the leader.

On this Sunday, each team in the National League had a scheduled doubleheader, with the Braves hosting the near bottom-dwelling Pirates, a team they had handled the previous two days. The Bucs were perennial tail-enders. Within a few years the core of this team would bring Pittsburgh a world championship, but in mid-1957 they had yet to find their way.

The Braves again won the first game of the doubleheader, with Henry Aaron launching his 22nd home run of the year, and reliever Ernie Johnson pitching two innings in relief. Johnson earned his fourth win of the year despite giving up two runs in the ninth and facing the potential tying run before inducing a Gene Baker fly ball to left to wrap up the 7-4 victory.

This game wasn’t without excitement, with a five-run eighth inning that gave the Braves the winning margin, but it was only an appetizer for what fans would witness in the nightcap.

The Pirates sent right-hander Joe Trimble to the mound for game two. It was just his second start in the major leagues. Moreover, he was working with only three days’ rest after his initial start against Chicago, a game that was halted by darkness with the two teams deadlocked, 5-5. The Braves decided to match Trimble’s inexperience with a relative newcomer of their own, sending out lefty Taylor Phillips. Phillips was starting just his fourth game of the year after starting just six times in his outstanding inaugural season in 1956.

Both hurlers battled through the early stages of the game, with Trimble yielding only one run through seven innings. That run came courtesy of Aaron’s solo shot in the fourth, his 23rd of the season.

Previously beset by arm injuries, Trimble would pitch his last game in the majors just two weeks later; this game was easily the top performance of his short career.

Phillips pitched brilliantly until his two-hit shutout was tarnished during the eighth inning.  He surrendered one walk and four hits in that frame, including Bill Mazeroski’s bases-clearing double, which was misjudged by left fielder Wes Covington. Phillips went to the showers with the Braves trailing Pittsburgh, 4-1.

The Reds swept Philadelphia this day, so a loss by Milwaukee would have knocked the Braves out of first place in the National League standings. With that possibility facing them, the eighth inning saw them answer the Pirates with a run of their own. With two out, Aaron posted his third hit of the game, driving in John DeMerit, a pinch-runner for Carl Sawatski, who had singled while pinch-hitting for Phillips.

Roy Face had also replaced Trimble on the hill for the Pirates, but he faced only four batters, ceding the mound to Luis Arroyo after Aaron’s single. Arroyo promptly got Eddie Mathews on a called third strike. Mathews represented the tying run, and this failed at-bat would be significant later in the game. After eight innings, Pittsburgh led 4-2.

Pitcher Don McMahon now made his first major-league appearance. The Braves had called McMahon up from Wichita a week earlier, and the big right-hander set the Pirates down in order in the ninth. McMahon would make 874 major-league appearances in his career, which spanned18 years. On this day, two of the first three batters he faced were strikeout victims.

As Milwaukee took its turn in the bottom of the ninth, an aging Andy Pafko led off the inning, pinch-hitting for Covington. Pafko was unsuccessful, as was shortstop Johnny Logan, but Frank Torre singled between the two strikeout victims. With two outs and a runner on, second baseman Felix Mantilla took his place in the batter’s box.

In a lineup that included Aaron and Mathews, Mantilla, a native of Isabela, Puerto Rico, was not viewed as a primary power threat. In fact, he had only delivered his first major-league home run the day before, also against the Pirates. But history would repeat itself; Mantilla homered again, scoring Torre and moving the Braves into a 4-4 tie.

The game moved into extra innings.

The Pittsburgh Post-Gazette has interesting anecdotes in its game story, noting that three times Braves fans came out of the stands to run around the bases. In one account, sportswriter Jack Hernon noted, “One elderly gent with a big ‘bay window’ slid head first into second and third before he was ushered away.”1 Extra baseball sometimes allows time for extra observations.

McMahon remained on the mound for the Braves, and his debut was stellar. Pitching three more innings, McMahon struck out seven while allowing no runs and only two hits. After posting a 6-2 record at Wichita, he would see action in 32 games in 1957, with a 1.54 ERA in 46⅔ innings. His initial four-inning appearance was his longest stint of the season.2

After surrendering the game-tying home run to Mantilla in the ninth, Arroyo also toughened, allowing only two hits the next three innings. Both teams got runners as far as third base during this time, but neither could push the winner across home plate.

The fateful 13th inning was a different story.

Dave Jolly relieved McMahon for Milwaukee and promptly allowed a leadoff single to Mazeroski. Jolly was in the fifth year of his career, all with the Braves, and would make his final major-league appearance late the same season. On this day a sacrifice bunt and a wild pitch pushed Mazeroski to third before Dick Groat’s sacrifice fly scored Mazeroski. That quickly, Jolly surrendered the lead to Pittsburgh, 5-4.

Red Thisted was a longtime sportswriter for the Milwaukee Sentinel. From the 1926 season until the end of 1965, Thisted attended 3,282 professional baseball games in Milwaukee. It is noted in a biography by Bob Buege that Thisted attended every home game played by a professional ballclub in Milwaukee, plus all of the away games unless prevented by wartime travel restrictions.3 On June 30, 1957, Thisted was in attendance. After Aaron singled to lead off the inning, Mathews, who failed to tie the game in the eighth inning, would get a shot at redemption. Thisted’s lede in the Milwaukee Sentinel the next day reads as follows:

“In one of the most dramatic finishes of an already ulcer-laden campaign, Eddie Mathews slugged his 16th homer with one on base in the 13th to give the Braves a 6-5 win over the Pirates in the nightcap Sunday after taking the opener, 7-4, before 36,283.”4

The homer was to left field and off a left-handed pitcher. Mathews revealed he was looking for a curve from Arroyo, but the Pirates left-hander threw a fastball.

“That’s a bad rule to follow,” Mathews told the Milwaukee Sentinel. “Ordinarily, a hitter looks for the fastball and can hit the curve easier if it comes.”5

“But at times I feel it’s better for left-handers to be looking for the curve first. In my case anyway, I can hang in there better when a pitcher crosses me up with a fastball.”6

With the doubleheader sweep, Milwaukee maintained its narrow lead over Cincinnati, and Jolly, despite a one-inning performance in which he allowed the go-ahead run, was credited with his only victory of the 1957 campaign.

Bob Wolf of the Milwaukee Journal emphasized the importance of this victory the next day:

“But Mathews was the big guy. He was the big guy not just because he won the game with his home run, but because of what that home run meant to the ball club. Nothing inspires a team more than to win a game the way Mathews won this one for the Braves.”7

Clearly, Mathews’ walk-off brought him headlines on that first day of July. And the Braves ultimately won the National League championship by eight games.

Mathews later hit another walk-off home run, this time in the fourth game of the 1957 World Series, a 7-5 win over the New York Yankees that evened the best-of-seven Series at two games apiece en route to the Braves’ eventual championship.