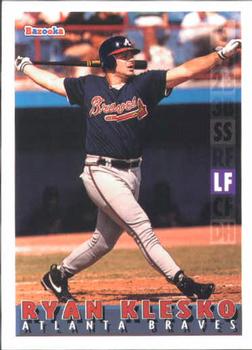 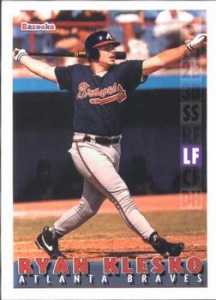 The Atlanta Braves were the prohibitive favorites to get to the World Series in 1995. The prior season had been shortened by the players strike and consequently there were no playoffs. But in the three seasons before that, the Braves showed dominance in the National League with appearances in a League Championship Series and two World Series. The Braves ultimately wound up marching to the World Series again, largely on the strength of their pitching. But a game in early June showed that they could also hit with power with the best of teams.

The 32,402 fans attending the June 6 contest against the Chicago Cubs in Atlanta witnessed the team’s best offensive performance of the season. The game was marked by the Braves’ 20 hits and five home runs, led by left fielder Ryan Klesko and rookie third baseman Chipper Jones, who together drove in 10 of the runs. The rout was highlighted by eight Braves runs in the fourth inning, their most in one inning since 1991.

The day before, the Cubs had fallen out of first place in the NL Central Division for the first time in the season after losing to the Braves. The Cubs’ pitching staff had the best ERA in the league coming into this game.1 Right-hander Steve Trachsel, who hadn’t recorded a winning decision in his last three starts, took the hill in his first-ever appearance against the Braves.

The Braves were in a battle with Montreal for second place in the East Division, which Philadelphia led by three games. On a mound staff that included future Hall of Famers Tom Glavine, Greg Maddux, and John Smoltz, 27-year-old left-hander Kent Mercker took his turn in the rotation. Now in his seventh season with the Braves, he had been converted into a full-time starter in 1994.

After the Cubs scored a run in the top of the first on a single, a balk by Mercker, and two groundouts, Atlanta started its onslaught in the bottom half. Marquis Grissom and Chipper Jones singled (his first of four hits in the game) and Fred McGriff hit a sacrifice fly. Klesko then hit a two-run blast, his first homer of the season. He had been a slump, batting .211 with only three extra-base hits coming into the game.

The Braves scored again in the second, when Mark Lemke hit a leadoff single, took second on Mercker’s sacrifice, and scored on Grissom’s second single of the night. Grissom, who had recently lost his leadoff role to rookie Brian Kowitz because of poor hitting, seemed to be adjusting well to the number-two slot in the batting order.

After a scoreless third, the Braves had their huge inning in the fourth. Javier Lopez led off with his sixth homer of the season. After walking Lemke and Kowitz, Trachsel was replaced by Willie Banks, who had been struggling with a 10.45 ERA and was reportedly on the trading block. Banks walked Grissom, loading the bases. Jones followed with two-run single. After McGriff was intentionally walked, loading the bases again, Klesko cleared them with his first major-league grand slam. (He would go on to hit 10 during his 16-year career.) Jeff Blauser added to Banks’s grief with a back-to-back solo home run to make the score 12-1.

Perhaps relaxed by his comfortable lead, Mercker gave up a leadoff triple to Shawon Dunston and a run-scoring single to Jose Hernandez in the top of the fifth. The Braves retaliated in the bottom of the inning with a two-run homer by Jones, his eighth of the season. Blauser added a run-scoring single.

The Cubs scored their last run of the game in the sixth, with Mercker yielding a single, a double, and an RBI groundout by Todd Pratt.

Turk Wendell, who had relieved Banks in the fifth, finished the game for Cubs. He allowed two more Braves runs in the seventh inning, on a two-run single by Lopez.

Klesko finished the day going 4-for-5 including his two round-trippers, with six RBIs and three runs scored. He avoided the sophomore jinx stigma (he was third in NL Rookie of the Year voting in 1994) when he finished the season with 23 home runs, 70 RBIs, and a slash line of .310/.396/.608. Klesko seemed relieved after the game, saying, “I’m here to drive in runs and I finally did my job.”2

Jones was also 4-for-5, with four runs scored and four RBIs. As the runner-up for Rookie of the Year in 1995, the switch-hitter collected 23 home runs and 86 RBIs for the season. Braves manager Bobby Cox gushed about Jones’s potential after the game, saying, “I’m going to get his uniform after the season and get him to autograph it. It will be worth more [than two of his baseball cards].”3

The Braves’ five home runs were their most in a game in 1995. The franchise record was eight, hit on August 30, 1953, against Pittsburgh. Grissom, Blauser, and Lopez each collected three hits. The Braves’ 20 hits matched their total on May 16 when they defeated Colorado, 15-3.

Mercker gave up five hits and struck out five during his six innings. He claimed his third win. Trachsel yielded seven earned runs in 3⅓ innings, with his ERA increasing from 2.86 to 3.99. Banks, who gave up eight runs, was traded to the Los Angeles Dodgers two weeks later.

The Cubs seemed to take the loss in stride, even though it was their fourth in six games, all on the road. Manager Jim Riggleman said, “We just got whipped. They just pounded the ball and beat us.”4 Cubs outfielder Brian McRae echoed Riggleman’s sentiments: “We got our butts whipped.”5 The Cubs failed to regroup and get back into first place again.

A month later the Braves took hold of first place and never relinquished it. They wound up with the best record (90-54) in the NL, carried largely by their pitching staff, which led the league in ERA and WHIP. While the Braves were second in the league in home runs, they finished second lowest in batting average and fifth lowest in on-base percentage.

Atlanta fulfilled the preseason prediction of a World Series appearance. The Braves lost only one game to the Colorado Rockies in the NLDS and then swept the Cincinnati Reds in the ALCS. Their defeat of the Cleveland Indians in the World Series was their only World Series championship from 1991 to 2005, when they won consecutive division titles (except for the strike year). Altogether they won five pennants in the 1990s. As such, they became known as the Team of the ’90s.

In addition to the sources listed in the Notes, the author consulted Baseball-Reference.com, Retrosheet.org, and the 1996 Atlanta Braves Media Guide.