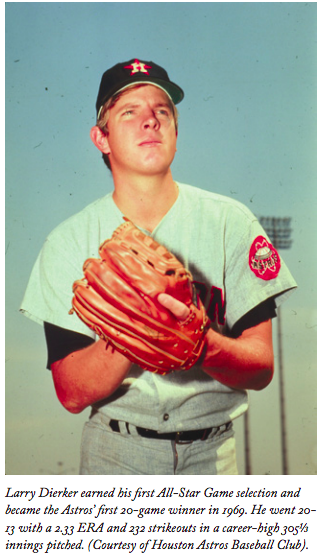 The commute for Larry Dierker on Sunday, June 8, 1969, was longer than normal. He had just finished the first week of his annual two-week military obligation with the 95th Training Division of the Army Reserve at Fort Polk, Louisiana, and was given a pass to travel about 200 miles to Houston for his “day job” as a starting pitcher for the Astros. “It was a special occasion,” Dierker recalled. “I had gotten quite a few tickets for friends and officers from Fort Polk. They all came down and I set them up.”1

Taking the mound for the first time in 10 days, the 22-year-old right-hander dusted off the cobwebs to toss an 11-inning complete game and belt the game-winning, walk-off hit in a 2-1 victory over St. Louis. “By the time I went back to Fort Polk, I was a big hero,” continued Dierker with a laugh, noting that he was freed from some of his duties. “Larry Dierker can do it all,” exclaimed teammate Doug Rader. “[H]e crawled out of a foxhole to do it.”2

“It was a strange year,” Dierker reminisced. “We started out 4-20. Jim Maloney [of the Cincinnati Reds] threw a no-hitter against us [on April 30], and then on the next day Don Wilson threw one against them.” Wilson’s victory was the first of 20 in the next 25 contests for skipper Harry Walker’s club, which crawled back to respectability. The Astros were in fifth place (26-30) in the NL West, seven games behind the Atlanta Braves, as they prepared to play the finale of a four-game set against the two-time reigning NL pennant-winners, the Cardinals. Manager Red Schoendienst’s Redbirds were struggling, mired in fourth-place (25-28), 11½ games behind the streaking Chicago Cubs in the NL East.

The pitching matchup foretold a nail-biting, low-scoring game. The Cardinals’ 24-year-old southpaw Steve Carlton (6-4) was perhaps the hottest pitcher in baseball. With a 36-27 record in parts of five seasons, Carlton had tossed four consecutive complete-game victories, allowing only 18 hits and five earned runs, and led the majors with a 1.75 ERA. Dierker debuted with Houston on his 18th birthday as a September call-up in 1964, and had since amassed a record of 42-41, including 7-4 with a 2.81 ERA thus far in ’69. “Dierk had great command – command of the strike zone and, most importantly, command of his mound presence,” said former Astros president and general manager Tal Smith. “Even as a teenager pitching in the major leagues, he had an air of confidence and toughness on the mound.”3

The Cardinals’ hot-hitting Lou Brock quieted the Astrodome crowd of 25,824 by leading off with a triple, his 21st hit his last 42 at-bats, to extend his hitting streak to 11 games. First baseman Doug Rader fumbled Vada Pinson’s one-out grounder for Houston’s only error of the game, but Brock stayed at third, and Dierker wriggled out of the jam by generating a 5-4-3 inning-ending twin killing off the bat of Joe Torre. St. Louis squandered another scoring chance after Tim McCarver led off with a triple in the second. Schoendienst called for a suicide squeeze bunt, but rugged Mike Shannon, affectionately called Moonman by his teammates, missed Dierker’s fastball. McCarver, who had broken for home, was easily tagged by catcher Johnny Edwards after a brief rundown; the play was officially scored as McCarver caught stealing home. Dierker fanned Shannon, retired Julian Javier, and breathed a sigh of relief.

The Astros collected their first hit of the game when Jimmy Wynn doubled to lead off the fourth. Rader followed with what Jim Wilson of the Houston Chronicle described as a “vicious bad-hopper” to second baseman Julian Javier, which struck him in the throat.4 As Javier went down, writhing in agony, Wynn raced home and Rader made it to second. Carlton escaped further damage by fielding Norm Miller’s chopper back to the mound and firing to third baseman Mike Shannon, who tagged a sliding Rader.

The Astros threatened again in the fifth when Edwards led off with a walk. He moved to third on Marty Martinez’s two-out single after third baseman Shannon misplayed the throw from right fielder Pinson. Carlton intentionally walked Wynn to load the bases and then whiffed Rader to end the inning.

Dierker’s streak of 15 straight batters retired ended with one out in the seventh when Pinson hit a slow chopper to shortstop Hector Torres. According to the Houston Chronicle, Torres “failed to charge,” enabling Pinson to reach first.5 Pinson advanced to second on Torre’s hit-and-run groundout and then tallied the tying run on McCarver’s single to center. “Both runs were cheap,” said Dierker about each team’s first tally.

Dierker surrendered his third extra-base leadoff hit when Shannon doubled to left in the eighth and moved to third on Javier’s sacrifice bunt. But Dierker once again escaped unscathed when he induced pinch-hitter Dave Ricketts and Carlton to ground out to second baseman Julio Gotay. “[Dierker is] mature beyond his years and he doesn’t beg out of tight spots,” mused Joe Heiling of the Houston Post.6

It looked as though the Astros might pull out a dramatic victory in the ninth. With Jesus Alou on first via a single, Dierker laced a two-out single to right field. Determined to force a play at home, Alou rounded third at full speed despite a sore leg; however, he stumbled and fell to the Astroturf and was subsequently tagged out to send the game into extra innings.

Long known for fundamentally sound baseball, the Cardinals committed another blunder in the 10th after Dierker’s leadoff walk to Torre. Pinch-runner Dennis Ribant, a pitcher by trade, “impersonate[d] a man trying out for the Olympic 200-meter dash,” opined Neal Russo of the St. Louis Post-Dispatch sarcastically.7 With his head down, Ribant failed to see that right fielder Norm Miller had caught McCarver’s liner or to notice third-base coach George Kissell frantically yelling at him, and he was easily doubled up.

The Astros threatened yet again when Torres lined a leadoff single in the 10th and moved to second on Martinez’s sacrifice bunt. Carlton intentionally walked Wynn, and both runners advanced on Rader’s bunt back to the mound. Don Bryant, pinch-hitting for Miller, grounded weakly to short to end the inning.

“I don’t recall ever thinking that I had to come out of a game when I was young,” said Dierker, but this contest was the first time he had ever gone into extra innings.8 The 6-foot-4, 215-pound hurler tossed a hitless 11th, issuing a two-out walk to pinch-hitter Joe Hague before fanning Brock to end the frame.

Gotay led off the Astros 11th with a single off the Cardinals’ first reliever, right-hander Ron Willis. Two batters later, the former Cardinal Edwards singled off reliever Joe Hoerner, an extremely dependable left-hander with a side-arm delivery who had carved out a microscopic 1.88 ERA in the previous three seasons. The Astros had left-handers Joe Morgan and Curt Blefary on the bench to pinch-hit, but they had no right-handed hitters. “Harry Walker told me to go up and hit,” remembered Dierker, who was batting .136 (5-for-36) with no RBIs entering the game. “‘I’m not going to send you back out there [to the mound],’ he said. ‘So get a hit!’”  Dierker took a mighty swing at Hoerner’s first pitch and launched what John Wilson described as a “booming smash off the left-field wall” to drive in Gotay for the dramatic winning run and end the game in 2 hours and 45 minutes.9 “I figured he’d start off me off with a fastball,” said Dierker after the game. “I was looking for it and just guessed right.”10

Dierker walked only two and fanned seven in his five-hit, extra-inning complete-game performance to emerge victorious in a hard-fought duel against Carlton, who struck out 12 and walked six in a 10-inning no decision. “I had a chance to throw to a college guy at Fort Polk to stay in shape,” noted Dierker, explaining that he was not surprised by his control or stamina. He also gave credit to his backstop, Johnny Edwards, a three-time All-Star while with Cincinnati. “Edwards was the best catcher I ever threw to,” Dierker later stated unequivocally. “It was the mental aspect of the game. We were always on the same page. He was a veteran and helped me to grow up.”

Tal Smith said this kind of performance captured the essence of Dierker, who won 137 games and logged almost 2,300 innings in his 13 years with Houston. “[Dierker] pitched half his games in the Astrodome. True, it was a big park which favored pitchers,” said Smith, who served the Astros for five decades in various front-office capacities. “But it also meant that pitchers were not generally going to get a lot of run support. That frequently resulted in Dierk and other starting pitchers being involved in close, low-scoring games. That’s where Larry was usually at his best due to his tenacity and fearlessness.”

1 All quotations from Larry Dierker are from the author’s phone interview with him on February 10, 2016, unless otherwise noted.

3 All quotations from Tal Smith are from the author’s email interview with him on January 13, 2016, unless otherwise noted.

8 Dierker pitched more than nine innings on only one other occasion. On September 13, 1969, he allowed just four hits while throwing 12 shutout innings (only to receive a no-decision) against the Atlanta Braves.