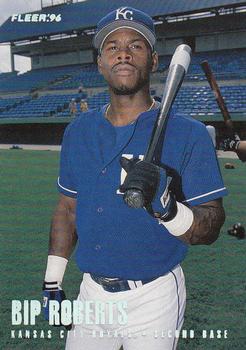 Fresh off their first-ever postseason appearance, the ’96 Mariners featured one of the top offenses (number 1 in runs scored and in team OPS); but their pitching staff sported a 5.21 team ERA. Mariners pitching had already allowed 10 or more runs 12 times in the team’s first 58 games, two fewer than their total for all of 1995. Injuries were a major factor with Seattle’s pitching woes, including ’95 AL Cy Young Award winner Randy Johnson on the DL with an irritated nerve in his back.

Taking the hill for the Royals was Kevin Appier, who led the AL with a 2.56 ERA in ’93 and was an All-Star in ’95. Seattle’s vaunted offense wasted no time jumping on Appier as Joey Cora got things started with a leadoff double and advanced to third on a single by young shortstop Alex Rodriguez. Ken Griffey Jr.’s single plated Cora, giving the Mariners an early 1-0 lead. Appier escaped further damage by getting Edgar Martinez to pop out to first and inducing Paul Sorrento to hit into an inning-ending double play.

Bob Milacki (1-3, 6.28 ERA) started for the pitching-depleted Mariners. Milacki had faced two batters (both reached base and scored) in the seventh inning three days earlier in a 13-5 loss to Cleveland. After retiring the Royals in order in the first, Milacki surrendered a leadoff single to Bob Hamelin in the second. With two outs a walk to Jon Nunnally and a single by Sal Fasano loaded the bases and brought number-nine hitter David Howard to the plate. Howard singled, scoring Hamelin and Nunnally and giving the Royals a 2-1 lead. The next batter, Bip Roberts, smacked a double to right, scoring Fasano and Howard and extending the Royals’ lead to 4-1.

With one out in the Royals third, Hamelin doubled and went to third on Jose Offerman’s single. Offerman then stole second. Nunnally’s double to left field scored both runners as the Royals’ lead grew to 6-1.

Undeterred by their five-run deficit, the Mariners loaded the bases with none out in the top of the fourth on back-to-back singles by Martinez and Sorrento and a throwing error by Bip Roberts that allowed Doug Strange to reach base. Darren Bragg’s single scored Martinez and Sorrento, cutting the deficit to three runs. Cora’s double drove in Strange (unearned) and Bragg, and the Royals’ lead was down to one run.

Salomon Torres relieved Milacki in the bottom of the fourth and escaped a bases-loaded jam when he struck out the Royals’ Offerman. Torres wasn’t as lucky in the bottom of the fifth. Johnny Damon led off with a bunt single and Nunnally walked. Both scored on Fasano’s double to left. Roberts’s single to center drove in Fasano, giving Roberts his third RBI and the Royals a 9-5 lead.

The Mariners bullpen provided no relief. Lee Guetterman walked Fasano with one out in the bottom of the seventh. Howard’s grounder to short forced Fasano at second. Howard stole second and scored on Roberts’ double (his fourth RBI of the game), giving the Royals their 10th run, the 13th time so far in the season (this was game 59) that Mariners pitching had allowed 10 or more runs. Tom Goodwin legged out an infield single and stole second, putting runners at second and third. After Joe Randa, was pinch-hitting for third baseman Keith Lockhart, was intentionally walked, Piniella brought in Rafael Carmona to face Joe Vitiello. Luck wasn’t on Carmona’s side as catcher John Marzano wasn’t able to catch Vitiello’s popup for out number three. Vitiello promptly singled, driving in Roberts and Goodwin and extending the lead to 12-7.

The Mariners made a last-ditch effort in the top of the ninth when Sorrento doubled off Linton and scored on Bragg’s single, his third RBI of the game. Five-run deficits are much more difficult to overcome later in games than they are earlier in games. After chipping away at 4-1, 6-1, 9-5, and 12-7 deficits, the Mariners ultimately succumbed to the Royals, 12-8.

This game was a microcosm of the 1996 season for the Mariners. Their talented offense smacked 17 hits, and it wasn’t enough to overcome a poor pitching performance. Cora smacked four hits and drove in three runs while Bragg had three hits and three RBIs as well. But the starting pitcher surrendered six runs in three innings pitched and the bullpen surrendered another six runs.

The Mariners finished the season in second place in the AL West and missed a wild-card berth by 2½ games. Their vaunted offense wasn’t enough to overcome bad pitching. They lost their Cy Young Award winner Randy Johnson to a bulging disc in his back, and GM Woody Woodward had limited options to fortify his pitching staff. Woodward wasn’t able to sign free agent lefty Greg Swindell. “We would have like to give him a shot with us, but it didn’t work out,” Woodward said.3 As for trade options, Woodward commented, “The only pitching available are big dollar guys. We’ll look for someone with experience who doesn’t make a lot of money.”4 At the trade deadline, the Mariners traded Bragg to the Red Sox for Jamie Moyer, who helped stabilize the Seattle rotation for the next decade.