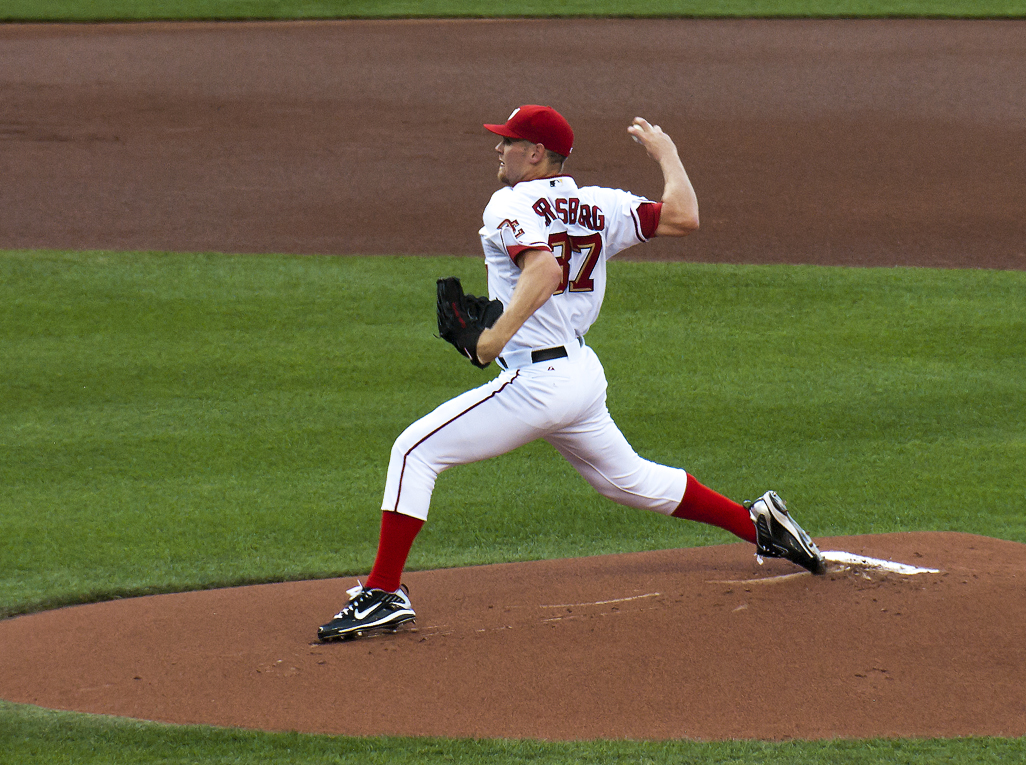 For the Washington Nationals, the drama of the 2008 season came at the very beginning of the season and at the very end. The grind of the in-between was punctuated by two losing streaks of nine games each, a 12-game losing streak, and a season-ending stretch of nine loses in 10 games.

On opening night at the new Nationals Park, Ryan Zimmerman hit a walk-off home run to deep center field in the bottom of the ninth inning off Peter Moylan for a 3-2 victory over the Atlanta Braves. Washington did not top the attendance mark that night of 39,389 fans in 2008.

In their next step toward baseball respectability, the Nationals selected San Diego State University right-handed pitcher Stephen Strasburg as the first pick in the first-year player draft on June 9, 2009. A year later, on June 7, 2010, they also picked first and selected a 17-year old phenom from Las Vegas, Bryce Harper.

After making his debut in the Arizona Fall League in 2009 and pitching at Double-A Harrisburg, Pennsylvania, and Triple-A Syracuse, New York, in the spring of 2010, Strasburg was penciled in for his major-league debut on June 8, 2010, creating “a buzz in the air … unlike any that had been felt since baseball returned to the nation’s capital.”1 That buzz was dubbed “Strasmas” and spread through the press, on baseball-related websites and on popular blogs.2 The Nationals distributed more than 200 media credentials and “an otherwise pedestrian early-June game was transformed into the most singular sort of Washington event.”3 Baseball author Elliott Smith later observed of the Nationals, “The dramatic turnaround of one of MLB’s most feckless franchises can be directly traced to two days, June 7-8, 2010.”4

In a retrospective look in 2017, Washington Post sports columnist Thomas Boswell commented: “From Opening Day of 2005 to the day Strasburg pitched his first game it’s possible that I never saw a single one of my lifelong national-baseball-writer friends inside RFK Stadium or at the new Nationals Park. Maybe I’m forgetting a couple. But the Nats were a poor-to-bad team and off the grid except to lots of DC baseball fans. It felt like ‘baseball people’ who hadn’t been to DC for a game in decades had to figure out whether they should land at Reagan, BWI or Dulles Airport.”5 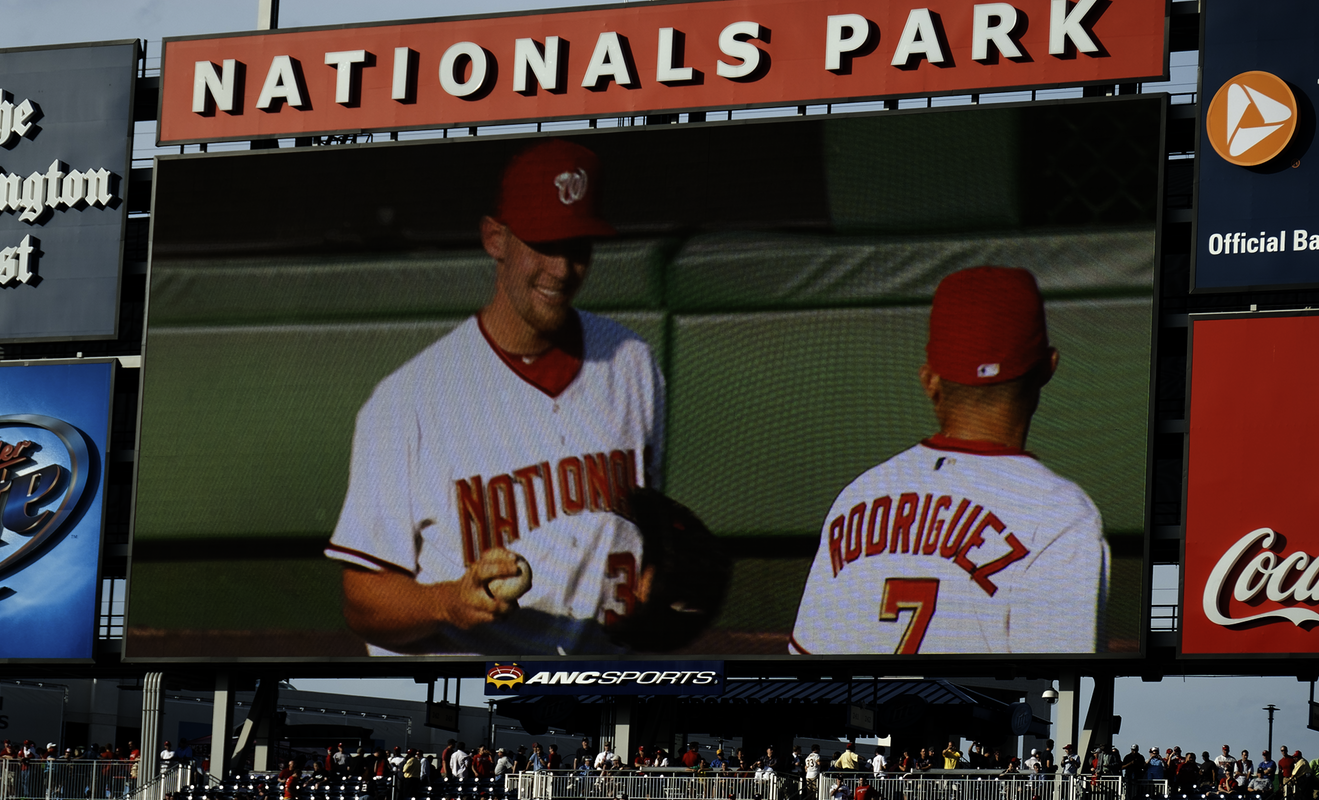 Strasburg took the mound at Nationals Park after pitching in 11 games (55⅓ inning) at Harrisburg and Syracuse and posting a record of 7-2 with a 1.30 ERA, 65 strikeouts, and 13 walks. He didn’t know who his catcher would be until that afternoon. Future Hall of Famer Iván Rodriguez had been on the disabled list with a bad back. Barry Svrluga noted in the Washington Post, “Strasburg, too, wanted him back. He said he spent time getting updates on Rodriguez’s health in the week before his start.”6 He got his wish, and the Nationals left the pregame scouting-report meetings to Rodriguez alone so Strasburg could just “go out there and enjoy it.”7 His opponent this night was righthander Jeff Karstens (1-1), obtained by the Pirates from the New York Yankees in a 2008 trade.

Strasburg’s first pitch to Pirates center fielder Andrew McCutchen was a 97 mph fastball for ball one, leading this fan to obsessively monitor the radar gun readings on the center-field scoreboard throughout the night, along with many of the 40,315 fans in attendance. Strasburg moved steadily through the Pirates’ lineup in the first three innings, allowing only a line-drive single to right by Andy LaRoche in the second. Strasburg struck out six on a mix of curves, changeups, and 98-99 mph heaters. Meanwhile, Karstens yielded Ryan Zimmerman’s 12th home run of the season in the first inning and the Nationals led 1-0.

In the Pirates’ fourth, Strasburg’s strikeout barrage took a pause. Neil Walker and Lastings Milledge singled to open the frame, and a double-play groundout by Garrett Jones excited the partisan crowd. But Delwyn Young lined his third home run of the season to right-center, and the Pirates led 2-1. Young was the last Pirate to reach base against Strasburg, who struck out five of six batters in the next two innings.

The Nationals got to Karstens quickly in the bottom of the sixth inning to take a 3-2 lead. After Ryan Zimmerman’s single to left center, Adam Dunn hit his 11th home run, to right. Josh Willingham went back-to-back with his 11th homer also and just like that, Karstens’ night was over.

As Strasburg took the mound in the top of the seventh inning with four consecutive strikeouts, the crowd sensed that he had one more inning in his arm. He made it seven in a row by striking out Jones, Young, and LaRoche, all swinging, the latter two on 99 mph fastballs on 0-and-2 counts to finish with 94 pitches, 65 strikes, and no walks in seven innings. The 14 strikeouts broke the Nationals record of 13 set by John Patterson in 2005.8 When the record was announced during seventh-inning stretch time, the crowded demanded and received a curtain call by Strasburg.

Perhaps the rest of the game seemed a bit anticlimactic. Tyler Clippard replaced Strasburg and recorded his 13th hold in the eighth inning. The Nationals added a run in the bottom of the eighth for insurance, and Matt Capps closed out the Pirates in the ninth for his 19th save and a 5-2 win.

On June 13, Strasmas moved to Cleveland. Three days earlier, TBS scrapped its previous telecast plans and aired a game between two last-place teams. The Indians ranked last in the American League in attendance, but 32,876 came to see Strasburg pitch. He lasted into the sixth inning, and the Nationals won 9-4. Strasburg’s line for his first two games: 12⅓ innings, six hits, three runs, 22 strikeouts, two wins. The hype extended to Albert Chen’s Sports Illustrated account of these two games: “Every fifth day in the baseball world will be Strasmas.”9

The 2010 season did not end well for Strasburg and the Nationals. On August 21 in Philadelphia, Strasburg tore his ulnar collateral ligament, requiring Tommy John surgery and a lengthy rehabilitation. The Nationals again finished the season in last place in the National League East with a 69-93 record. Their slow and tortuous path toward baseball respectability took another step forward in 2011 when they signed Jayson Werth10 and in 2012 when Bryce Harper made his major-league debut. But on this night we can remember that “Strasburg put the Nats back on the baseball map.”11 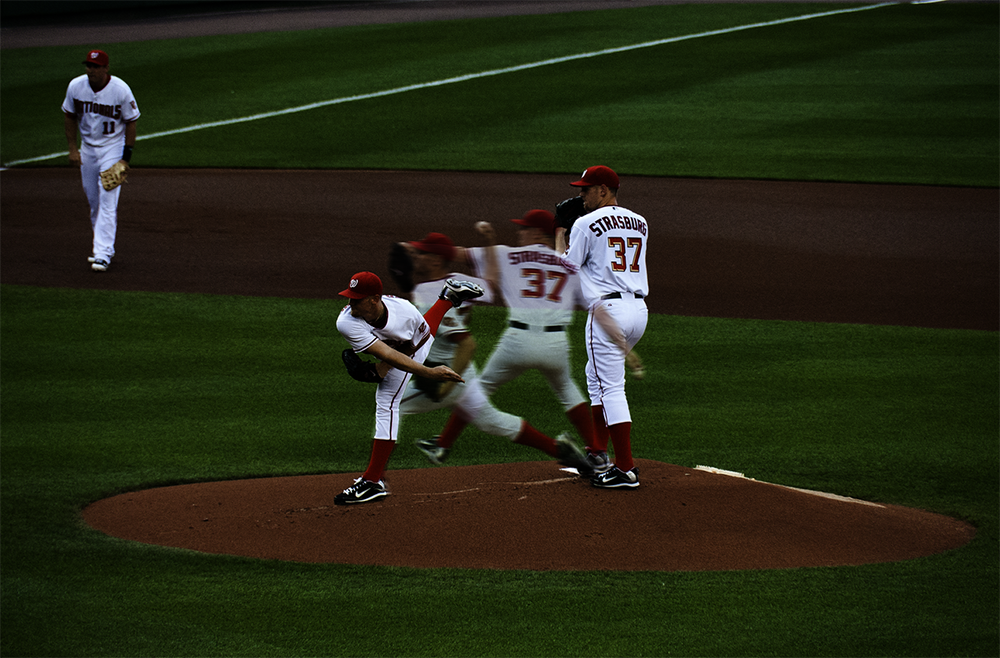 Sitting in Section 130 with four colleagues in town for a business meeting, this author took in all the sights, sounds, and action in an electric atmosphere at Nationals Park. A photo album created to capture this game and signed by Stephen Strasburg is a treasured memento of that night.12

The author accessed Baseball-Reference.com for box scores/play-by-play information (baseball-reference.com/boxes/WAS/WAS201006080.shtml) and other data, as well as Retrosheet.org (retrosheet.org/boxesetc/2010/B06080WAS2010.htm).

2 “Standing room only for Stephen Strasburg’s Washington Nationals debut,” ESPN News Services, June 8, 2010, espn.com/mlb/news/story?id=5261829. Although the actual origin of the word “Strasmas” is uncertain, it was used on June 7, 2010, in We Love DC, a Washingtonnews and lifestyle blog (Tom Bridge, “Sports Fix: Strasmas Eve Edition,” welovedc.com/2010/06/07/sports-fix-strasmas-eve-edition/).

12 Photographs for this essay are used with the consent of Nick Barilo.