May 15, 2018: Nationals' Juan Soto homers before his major-league debut

May 15, 2018: Nationals' Juan Soto homers before his major-league debut 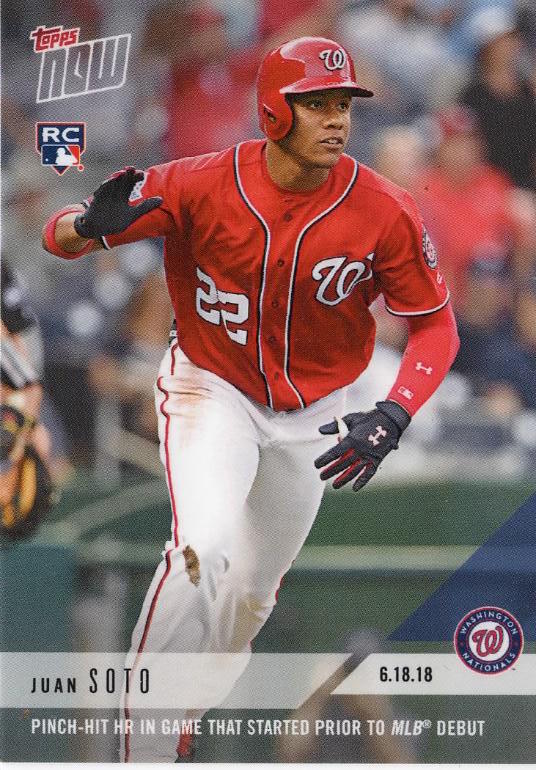 “He has six homers, but this was actually his first. It just happened after the other five.”1

I promise that sentence will make sense by the end of the story.

The New York Yankees, and their fans, were in Washington for a rare visit.2 The teams were nervously watching the weather: It was a two-game series but thunderstorms threatened for both nights. Nationals pitcher Gio González (4-2, 2.22 ERA) was facing Masahiro Tanaka (4-2, 4.66), who was unbeaten on the road. The Yankees sat atop the AL East at 28-12, a half-game ahead of the Red Sox. The Nationals were 24-18, third in the NL East, just two games behind Atlanta.

Aaron Hicks opened the game by grounding out to the shortstop. Aaron Judge took his first at-bat in DC: At 6-feet-7 he towered over the catcher and umpire Lance Barksdale. González struck out Judge looking at a sweeping curveball. Reigning NL MVP Giancarlo Stanton walked (Stanton and González faced each other frequently during Stanton’s years in Miami). Gary Sánchez doubled into the left-field corner, moving Stanton to third, but Didi Gregorius grounded out to end the threat.

Trea Turner grounded out on Tanaka’s first pitch. Bryce Harper grounded into the shift to third baseman Miguel Andújar, who was playing close to second. Anthony Rendon hit a line-drive homer just into the left field seats to start the scoring, but Matt Adams grounded out to end the inning.

Tyler Austin singled to center to open the Yankees’ second, then Andújar doubled off the out-of-town scoreboard in right. With runners on second and third with no outs, González found himself in a second jam in as many innings. But he escaped: First Tanaka swung wildly three times and was out.3 González caught rookie Gleyber Torres looking at a curve, then Hicks swung at another curve for the third straight strikeout.

The Nationals’ Howie Kendrick doubled off the base of the wall in left. With Mark Reynolds batting, Tanaka almost picked Kendrick off second. (Perhaps Kendrick was watching the catcher’s signs instead of the pitcher.)4 After Reynolds struck out, Andrew Stevenson hit one under Gregorius’s glove into left, scoring Kendrick. Pedro Severino dunked one into left-center, scoring Stevenson, who almost ran over the umpire crossing home plate. After González struck out, Severino scampered to third on a passed ball but was left there when Turner flied out to left with the score at 3-0, Nationals.

In the top of the third, Judge walked on a full count but was erased when Stanton grounded into a 4-6-3 double play. Sánchez flied out to the warning track in right-center. Harper started the home half of the third with a groundout to first. Rendon flied out: Judge made the catch running toward center when Hicks lost the ball in the twilight. Adams grounded out to end the inning.

Gregorius doubled to begin the Yankees’ fourth when Adams and Stevenson failed to communicate about the fly ball to left — or weren’t able to hear each other over the crowd since they both called for the ball. The error was charged to Stevenson: his first career error. Austin homered over the scoreboard: 3-2, Nationals. González escaped that inning with no further scoring with a strikeout and two groundouts. The Nationals went out 1-2-3 in the bottom of the frame.

Judge walked again to start the fifth as lightning flashed over the park. Stanton’s 1,000th career hit was a bloop into right field that fell between three Nationals defenders. The crowd, which included a substantial number of Yankees fans, acknowledged the milestone. Sánchez walked, loading the bases. Gregorius grounded to Reynolds at first, who threw home for the force out. With lightning flashing close by, Austin hit a fly to deep center and Stanton scored to tie the game. After 11 pitches, in a steady rain, Andújar finally grounded out with González’s pitch count at 111. The game continued in the bottom of the fifth with everyone keeping a nervous eye on the approaching lightning. After Severino flied out, Moisés Sierra batted for González, triggering a mound visit (with interpreter) to give Tanaka the scouting report. Sierra flied out, then Turner grounded out to end the inning.

Wander Suero, who had debuted just two weeks earlier, pitched the top of the sixth. The video boards announced, “Take cover under the concourse!” to the fans some of whom nevertheless remained in their seats in their raincoats. Hoping to break the tie, Yankees manager Aaron Boone pulled Tanaka for a pinch-hitter, Brett Gardner. He flied out to Adams in left field, who tracked the ball among the swirling airborne napkins and wrappers. Perhaps affected by the rain, Suero hit Torres in the forearm. With Hicks batting, Severino almost picked Torres off first, but there was no challenge to the “safe” call. Suero was able to field Hicks’ bunt back to mound, then Judge struck out looking again. Since it was pouring, with lightning around the park, at 9:01 P.M. crew chief Ted Barrett called for the tarp with the scored tied, 3-3.

Meanwhile, in Bowie, playing for the Double-A Harrisburg Senators, Juan Soto had a 3-for-4 day with an RBI.

The rain delay lasted over a month. First, the teams planned to play the remaining innings the next night before the second game of the two-game series, but the weather on May 16 was worse. So the remaining 1⅓ games were rescheduled for June 18, with both teams losing an off-day and the Yankees coming to DC for one game between Tampa Bay and Seattle. Fans who had tickets for the May 16 game could see the remaining innings of the suspended May 15 game and the deferred game on their May 16 ticket: Fans who had tickets for the May 15 suspended game would have to purchase a new ticket.

A lot had happened since the tarp was pulled onto the field on May 15: Kendrick was down for the season with a ruptured Achilles tendon; Stevenson had been sent to Triple A; Adams was injured; and Adam Eaton and Daniel Murphy had returned from the DL. Soto debuted on May 20 and had been lighting the diamond on fire ever since (he was batting over .300, and his OPS was hovering around 1.000).

Since Tanaka had already been pulled for a pinch-hitter, Chad Green started the bottom of the sixth, striking out Harper. Rendon singled to right. That brought up Soto, with plenty of commentary from the radio and TV announcers about his debut date of May 20, five days after this game started. In “one for the record books” in more ways than one, Soto homered into the second deck, almost to the concourse — territory usually reserved for Harper and Adam Dunn. Perhaps the Yankees should have seen this coming: He’d homered against them twice on June 13.5 Brian Goodwin (added to the lineup since May) struck out, Reynolds singled, but Wilmer Difo (another addition, he was pinch-hitting for Stevenson) flied out to end the inning with the score 5-3, Nationals.

Suero picked up where he’d left off a month earlier and struck out Stanton to start the seventh. Sánchez doubled, so Nationals manager Davey Martinez replaced Suero with Sammy Solis. Solis got Gregorius to fly out to left, which turned into a double play when Sánchez headed for third and Soto (playing left field) alertly threw to second. In the bottom of the seventh, Chasen Shreve got Severino to ground out and Eaton to strike out. Turner doubled and Harper walked, but the inning ended when Sánchez picked Turner off second.

Ryan Madson got two quick groundouts in the top of the eighth, but then Greg Bird doubled. Torres singled on the next pitch, moving Bird to third. One pitch later Madson was out of the inning when Hicks grounded out to the shortstop. Adam Warren worked a 1-2-3 bottom of the eighth.

Given the score, it was no surprise that Martinez called on Sean Doolittle, the Nationals closer, for the ninth. He earned his 10th save of the year by striking out Judge and Stanton and inducing Sánchez to fly out to center (although he had earned his 18th save two days earlier). Suero was credited with his first major-league win.

Despite the impressive rookie performance by Soto,6 the Nationals finished second in the NL East (82-80) and missed the postseason. The Yankees, powered by their young players,7 finished second in the AL East, at 100-62. They won their wild-card game, then lost to the Red Sox in the AL Division Series. In the greater scheme of things, this game will be most remembered for Juan Soto’s home run, listed in the record books in a game five days before his debut.

I was at the game, one of the fans taking cover under the concourse by the fifth inning. Given the intensity of the storm, it seemed only a matter of time before a player got hurt (thinking of Wilson Ramos, Bryce Harper, and Adam Eaton, all of whom suffered weather-related injuries in Nationals Park) or struck by lightning, so we were relieved when the game was called, even though we had to wait for a break in the storm to cross the plaza to leave the ballpark.

4 F.P. Santangelo, one of the Nationals TV broadcasters, mentioned this from personal experience.

7 Miguel Andújar and Gleyber Torres were second and third in the AL Rookie of the Year voting. Aaron Judge had won that honor the previous year.