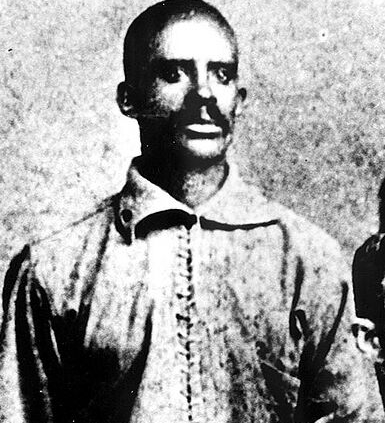 Professional baseball leagues began in 1871 with the founding of the National Association, which many consider the first major league. Its demise in 1875 opened the door to the National League, and minor leagues then followed.

Leagues rose and crumbled in those early days, franchises came and went (or switched home cities), but one thing was steadfast – pro baseball was a White man’s game. At least until early in the 1878 season, when Bud Fowler, an itinerant 20-year-old from upstate New York, became the first Black player in what came to be called Organized Baseball,

Although he was known as Bud Fowler throughout his long career, his birth name was John W. Jackson Jr. Born in 1858 in the village of Fort Plain, New York, Fowler grew up in nearby Cooperstown – in fable the birthplace of baseball, and the modern home of the National Baseball Hall of Fame, where Fowler was to be enshrined in 2022 for his decades of contributions to early Black baseball.

Why John W. Jackson Jr. became Bud Fowler is a subject of speculation. The best explanation of why he changed his last name is that he wanted to make a clean break from his staid family existence. John Sr. was a barber, a trade that amounted to a middle-class profession in the economically suppressed African American world of the nineteenth century, while his son seems to have been intent on becoming a professional ballplayer, a rare and precarious existence in the 1870s for any man. As to his nickname, he appears to have been given it because he himself called other guys Bud.1

Fowler didn’t mind traveling for his baseball. Over a 30-year career, he played in locales ranging from New Mexico to New Orleans to Ontario, Canada. It was in Massachusetts that he first caught the baseball public’s eye while pitching for the amateur Chelsea Franklins outside Boston in the spring of 1878.

On April 24 he was on a “picked nine,” mostly made up of Chelseas, that defeated the Boston Red Stockings, the National League’s defending champion, 2-1. Pitching in typically chilly New England springtime weather, Fowler gave up only three hits, although the Bostons didn’t seem all that inspired – “the boys were rather unwilling,” most playing without their baseball shoes, and wearing jackets in the field.2

Hurling for Chelsea, again in lousy weather on May 15, Bud allowed a professional nonleague team from Worcester only five hits. But Chelsea lost, 3-0, as Bud was matched up against Bobby Mathews, one of the outstanding pitchers of the day.

By now he had caught the eye of the nearby Lynn Live Oaks of the International Association, a two-tier league formed in 1877 with junior members in smaller cities and towns and, in 1878, a 12-team championship tier in the United States and Ontario that included Lynn. The International Association meant to challenge the new National League for major-league hegemony; while it failed to achieve that stature, it became known as one of the first minor leagues.

So when the Live Oaks, mired in a slump and with Price, their starting pitcher, out with an injury, took the field against the London (Ontario) Tecumsehs on May 17, they tried something new. They enlisted “the young colored pitcher of the Chelseas,” integrating professional league ball to solve their pitching problem.3 This was no Jackie Robinson moment – Fowler’s tenure with the team was short-lived and did not lead to a movement to further integrate pro baseball. But there he was, a Black man on a White team.

Bud’s performance was stellar: He threw hitless ball until the fifth and gave up only two hits and a walk in seven innings. At that point the Oaks were ahead 3-0. They had scored their first run in the third inning when Patrick Gillespie, the second baseman, got a hit and was driven in on another hit by catcher Tom “Sleeper” Sullivan. Lynn followed right up with two more in the fourth on consecutive hits by right fielder George Wood, third baseman Harry Spence, and first baseman Bill Lapham.

What was meant to be a nine-inning game ended in the seventh when the Tecumsehs refused to continue after a second disagreement with an umpire’s call. Shortstop Mike Burke, the recipient of Fowler’s only base on balls, was thrown out trying to steal in the second inning. The Tecumsehs’ manager, the veteran Ross Barnes, protested and succeeded in getting umpire Henry Murphy replaced on the spot. Then, in the seventh, Burke tried to score on a hit to the outfield, but had no better luck with the second ump, James Tufts, who called him out at the plate. At that point the Tecumsehs walked off, and the game was forfeited to Lynn.4

Fowler was back in the box wearing a Live Oaks uniform the next day, again facing Worcester and Mathews.The outcome was about the same as on May 15. Mathews gave up four hits and Fowler six, but Worcester won, 6-4. Even in these early times when fielders didn’t wear gloves and many errors were made, the Live Oaks were notable for their lousy defense – they made 16 miscues (although three of them were Bud’s).5

With Price still on the mend, the Live Oaks continued to employ Fowler. He made at least two more starts for them, losing both games. Then, on June 1, the struggling Lynn team merged with independent Worcester. Players from both squads made up the new team, but the roster did not include Fowler. Mathews was Worcester’s hurler, and while he was on a short hiatus from the majors, in the end he pitched for 15 years in the big leagues and won 297 games. He was the easy choice for the merged team.

Bud was demoted to a new secondary Lynn squad. In addition to his athletic ability and baseball acumen, however, he had a third valuable trait: availability. He was ready on July 11 when the Live Oaks needed a “first class” pitcher to face the New Bedford, Massachusetts, team, Mathews having been suspended for drunkenness.6 New Bedford won, 6-0, although Bud gave up only five hits. Changing home cities did nothing to improve the Live Oaks’ fielding; they were charged with either nine or 10 errors, depending on the newspaper box score.

Fowler stayed around the Boston area at least for the first half of 1879, pitching for a team in Malden, and then for the semipro Aetnas. Jeffrey Michael Laing, his biographer, says Bud then went west to the Massachusetts-New York state line in Berkshire County, Massachusetts, for the rest of that year and 1880.7 There was only amateur ball in the Berkshires at that time, but Fowler had also followed his father into the barber profession, and could have used it, as he often did later, to sustain himself between paying baseball opportunities.

In 1881 he showed up in Guelph, Ontario, for a short time, but objections by some of his White teammates caused him to leave.8 It was just one of many times that he voluntarily or involuntarily left a team because of racism, as a promising start for Blacks in pro ball met racial opposition. Bud and dozens of others after him who were clearly identified as Black were completely forced out of Organized Baseball by 1900.

Fowler, becoming an infielder later in his career due to arm trouble, played, managed, and promoted baseball until 1909 on integrated teams, Black teams run by others and teams headed by Bud himself. Most prominently, he organized the Page Fence Giants, a leading Black team of its time, in 1895. His many career moves were the result of discrimination, discovery of better opportunities and, one suspects, a penchant for roving the world of baseball.

In addition to the sources cited in the Notes, the Baseball-Reference.com website provided statistics and team information.