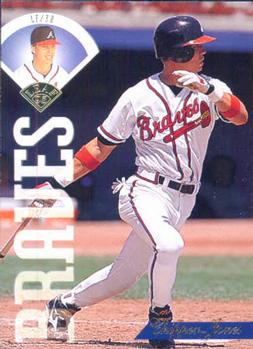 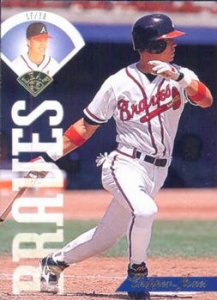 The Atlanta Braves were the kings of major-league baseball heading into the 1996 season. Their 1995 season was capped off with the franchise’s first world championship since 1958. Led by a pitching staff that one day would boast three Hall of Famers (Greg Maddux, Tom Glavine, and John Smoltz) the Braves dismantled the powerful offensive mechanism of the Cleveland Indians in six games. Their victory gave credence to the old baseball adage that good pitching always beats good hitting.

It was of little surprise to many when the Braves (28-15) were atop the standings of the National League East division six weeks into the 1996 season, although their lead was slim as the Montreal Expos (28-16) were right on their heels.

The Braves had just come off a three-game sweep at home against Cincinnati as they welcomed the Chicago Cubs to Atlanta Fulton-County Stadium for a three-game set beginning May 20. Chicago (20-24) was in second place in the NL Central, 1½ games behind Houston (22-23) and a game ahead of Cincinnati (16-22). The Cubs were also coming off a three-game series. But their end result was much different as they had dropped two of three to the Florida Marlins.

The pitching matchups for the game featured Frank Castillo for the Cubs and Steve Avery for the Braves. Castillo (1-5, 5.13 ERA) was having a tough go of it so far in the season. On top of his rough start, Castillo was 0-6 against the Braves in his career. Avery (4-3, 2.32 ERA) was not pitching of late as he did when he broke into the big leagues in 1990. He had not posted double-digit wins since 1993, and in 1995 he went 7-13. Perhaps the 1996 season would be a bounce-back year.

The Braves were undoubtedly aware of Castillo’s history against them. They scored first with a run in the bottom of the first inning. Marquis Grissom doubled to right field, moved to third base on a groundout off the bat of Mark Lemke, and came home when Chipper Jones grounded out to second base.

The Braves showed little mercy on their opposition in the second inning. Consecutive singles by Ryan Klesko, Dwight Smith, and Eddie Perez tallied one run. After a line out by Jeff Blauser, Avery stepped in and doubled to left field, scoring Smith and Perez. Grissom followed with another double to score Avery. After a walk to Lemke, Jones sent his sixth home run over the wall in left field. Chicago manager Jim Riggleman pulled Castillo from the game and replaced him with Rodney Myers. The Braves scored seven runs in the inning and led 8-0.

The lead was expanded by one in the third when Blauser connected for a homer off Myers, his fifth home run of the year. The home-run derby continued in the fourth frame when Fred McGriff also connected off Myers, a two-run shot. It was McGriff’s 12th homer of the still-young season. Tyler Houston added a three-run blast in the sixth off Cubs reliever Doug Jones, his first of the year, and the Braves were in total control of a knee-slapper of a game. Atlanta led the Cubs by two touchdowns and two extra points, 14-0.

The Cubs avoided the shutout by scoring a run in the top of the seventh inning. Mark Grace singled. Sammy Sosa followed with a double to left field, sending pinch-runner Pedro Valdes to tird. Valdes scored the Cubs’ first run on a single by Leo Gomez. Atlanta manager Bobby Cox made a move to the bullpen and brought in Mike Bielecki. The veteran right-hander shut the door on the Cubs and kept their run total at one.

Atlanta scored four more runs in the bottom of the seventh inning, making the score 18-1. The eighth and ninth were scoreless for both teams. The Braves banged out 17 hits in the win, seven for extra bases. “Everything went through,” said Cox. “The flares were in. The head-knockers went through. Everything just found a hole. Believe it or not, Avery was a big part of the seven-run second inning. If he had bunted (with men on first and second) and gotten them over, we might have gotten three or two that inning and who knows what the score would have been.”1

The Braves’ 18-1 stomping of the Cubs marked the most lopsided win since the franchise relocated to Atlanta in 1966. Jones and Houston each knocked in five runs. For Jones, it was a career high that he would equal many times in his career. Avery went six innings for the win, scattering five hits and striking out six. “They went a little overboard for me,” he said of his teammates’ scoring outburst. 2

“Games like this are when you wish you listened to your parents and went to medical school,” said the Cubs’ Grace. “No fun at all. When it gets out of hand that quick, you just realize you’ve got to get ’em the next day against Maddux. Yeah, that ought to be easy.”3

Unfortunately for Avery, his season did not rebound as he might have hoped. He ended with a 7-10 record and a 4.47 ERA. Atlanta made it a second straight pennant, but lost to the New York Yankees in the World Series, four games to two.