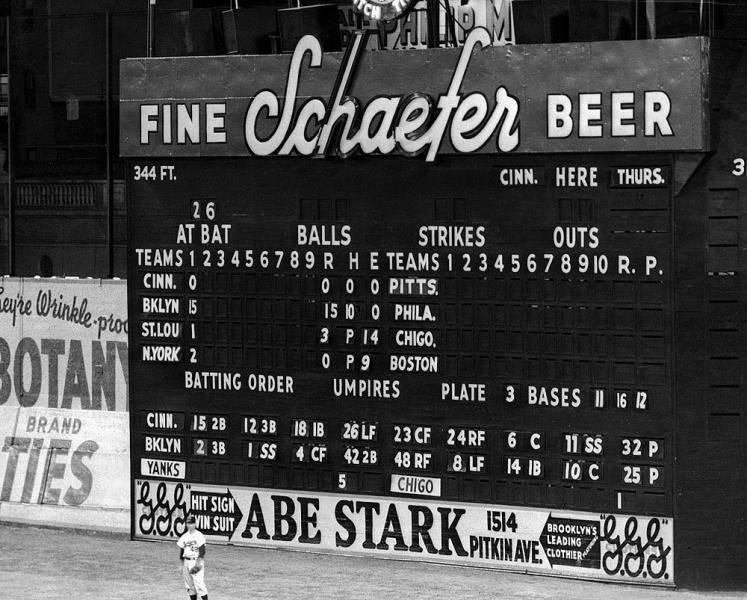 In the 1950s, a kid’s trip to a Dodgers game at Ebbets Field was a very special occasion and one of unimaginable joy. The atmosphere, the color, the noise, and the food challenged all the senses. The game was an opportunity to see Jackie, Pee Wee, Duke, Campy, and all the others. If you managed to get there a half hour before first pitch and peered deep down the first-base line into the Dodgers bullpen, you could even see the pregame show from a distance.

On this night, watching a game on a small black-and-white television was an opportunity not to be taken for granted and the pregame show, Happy Felton’s Knot-Hole Gang, was not to be missed. The show brought together Little Leaguers and Dodgers players with Felton, wearing a Dodgers uniform and serving as the host. To begin, he would warm up with three youngsters and introduce a Dodgers player. Each youngster got to ask the player a baseball question.

The guest Dodger would then play catch with the kids and judge their fielding ability, arm, speed, and baseball competence. Every youngster received baseball equipment for appearing on the show. The winner, as selected by the player, would return the following day and have a televised chat with his favorite Dodger.1 It was entertainment in its simplest form, to which any kid could relate.

The matchup on May 21, 1952, pitted the Dodgers and the visiting Cincinnati Reds. Ewell Blackwell started for Cincinnati. Blackwell was a lanky, 6-foot, 6-inch, side-arming right-hander nicknamed The Whip. Warren Corbett began his SABR biography of Blackwell this way: “Fear. Ballplayers don’t like to talk about it. Rarely is a pitcher so fearsome that he can’t be ignored. Walter Johnson was one. Bob Feller. Randy Johnson. Ewell Blackwell was one.”2 Blackwell, often in poor health and suffering from shoulder pain, was having a tough season, entering the night with a 1-5 record. However, he enjoyed a solid track record against the Dodgers, including three wins in his stellar 1947 season.3

For the Dodgers, Chris Van Cuyk was a young pitcher seeking a regular spot in the starting rotation after brief opportunities in 1950 and 1951. He was the younger brother of Johnny Van Cuyk, a pitcher who had a cup of coffee4 with the Dodgers in the 1947-49 seasons without any decisions.

Tonight was not going to be Blackwell’s night. The bottom of the first inning started innocently when he got out Billy Cox on a groundout to third. After Pee Wee Reese walked and Duke Snider hit his fourth home run of the season, Blackwell would face only three more batters. When George “Shotgun” Shuba knocked in Jackie Robinson with a single to right, that ended Blackwell’s night. Bud Byerly came in to pitch to Gil Hodges, and the Reds caught Andy Pafko trying to steal third base. At that point, the Dodgers led 3-0. Five straight Dodgers had reached base, but there were now two outs in the inning. Probably no one could imagine what was about to happen.

Another 14 batters in a row reached base on seven singles, five walks, and two hit batsmen. The Dodgers led 15-0 after facing four Reds pitchers: Blackwell, Byerly, Herm Wehmeier, and Frank Smith. Reese alone reached base three times in the first inning and even Van Cuyk contributed with two singles and two RBIs. Frank Smith struck out Snider looking to end the bottom of the first inning 59 minutes after it began. (Remarkably, it took only 2:26 from start to finish to end the Reds’ nightmare.)

“If this had been a boxing match, the referee would have stopped the fight at the opening bell,” a pair of authors observed.7 Blackwell wasn’t about to hang around the ballpark. He showered quickly, took a taxicab back to the Commodore Hotel, sat down in the bar for a drink and heard the television announcer blare out that the Dodgers were still hitting in the bottom of the first inning. Blackwell recounted the rest of the tale in an interview with Donald Honig.8 “Then the next thing I know Bud Byerly comes in and sits down next to me. … He didn’t say anything. ‘Don’t you want to know what the score is?’ I asked. ‘Frankly, no,’ he said. ‘Don’t feel so bad,’ I said. ‘At least they can’t blame it all on us.’”9

Of course, the game took its full course though the outcome was a virtual certainty. The Dodgers scored two runs in each of the third and fifth innings in an identical manner on singles from Van Cuyk followed by home runs from Bobby Morgan, his first two of the season and his first ones ever at Ebbets Field. Morgan had replaced Cox to begin the second inning. The lone run for Cincinnati came in the fifth inning on Dixie Howell’s first home run of the season. For Van Cuyk, a complete-game five-hitter was just one part of the 19-1 Dodgers’ victory. His four hits nearly equaled the Reds’ total and his two RBIs would have been sufficient for the victory.

The Dodgers’ victory put them in first place, a half-game ahead of the New York Giants in the National League race. They held that position for all but six more days on their way to a World Series date with the New York Yankees. Blackwell beat the Dodgers, 7-4, on June 15 in his next start at Ebbets Field. In late August, he was traded to the Yankees and made only four more major-league starts after the 1952 season. On June 14, Van Cuyk pitched another complete-game victory over the Reds, 6-2, at Ebbets Field, but two months later he hurled his last game in the major leagues. But for this night, it was “fifty-nine minutes of sheer ecstasy”10 and a good night’s sleep for any youngster who happened to catch the first inning on TV.

In the 1950s, Brooklyn Dodgers games were televised on WOR-TV Channel 9 in New York. On a school night for this third-grader, the deal was that I could watch the pregame show, Happy Felton’s Knot-Hole Gang, and the first inning of the game on the 12-inch Andrea television in the basement of our home. Then I would be off to sleep. On this night, I maintained that a deal is a deal!

In addition to the sources cited in the Notes, the author also accessed Baseball-Reference.com (baseball-reference.com/boxes/BRO/BRO195205210.shtml) and Retrosheet.org (retrosheet.org/boxesetc/1952/B05210BRO1952.htm).

1 Happy Felton’s Knot-Hole Gang on June 26, 1956, preceding the Dodgers vs. Cubs game, is provided as an example (youtube.com/watch?v=KsQuqhWhm8o). Jackie Robinson answered questions and conducted the workout. The previous winner had selected Pee Wee Reese for his solo chat and as the show concluded, Pee Wee took him into the dugout to meet other players.

3 Blackwell led the National League in 1947 with 22 wins, 23 complete games and 193 strikeouts. He finished second to Bob Elliott (Boston Braves) in the voting for the Most Valuable Player Award. Blackwell no-hit the Braves 6-0 on June 18 and was denied a second consecutive no-hitter on June 22 when Eddie Stanky singled with one out in the ninth inning in the Reds’ 4-0 win over the Dodgers. Blackwell was a National League All-Star for six consecutive years, 1946-1951.

4 Paul Dickson, The Dickson Baseball Dictionary, 3rd Edition (New York: W.W. Norton & Company, 2009), 230. The term means a brief trial in the major leagues by a minor-league player. “The phrase seems to have derived from the observation that a young player’s first taste of the major leagues is usually quite short, figuratively just long enough to drink a cup of coffee.”

6 Ibid. Sheehan commented that there was “no previous listing, but this has to be a record, too.”

8 Donald Honig, Baseball Between the Lines: Baseball in the Forties and Fifties As Told by the Men Who Played It (Lincoln: University of Nebraska Press, 1993), 46-54.