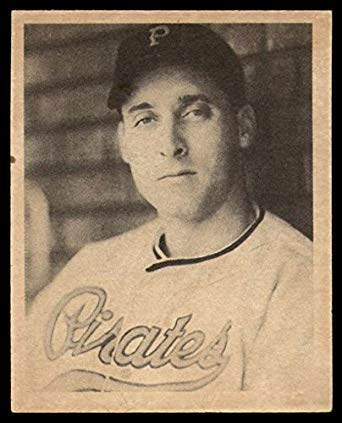 Jason Bay of the Pittsburgh Pirates had eight RBIs in a game twice in his career and both within a year of each other: September 19, 2003, and July 2, 2004. Bay may not have realized it, but he just missed the all-time Pirates single-game record of nine in a game set by Johnny Rizzo on May 30, 1939.

The right-handed-swinging Rizzo spent seven seasons in the minors with the St. Louis Cardinals’ organization before an October 13, 1937, trade to Pittsburgh, followed by his breakout rookie season of 1938 in which he pounded 23 home runs. Ironically, this record was also broken by Bay, who had 26 home runs in 2004, batting .301 with 111 runs driven in. Left fielder Rizzo, a 26-year-old Texan in his second year in the majors, struggled in the early going, batting only .219 in April and .210 (17-for-81) with no home runs and a woeful .289 on-base percentage since May 8. On May 29, at Sportsman’s Park in St. Louis, Rizzo managed a run-scoring double in five at-bats during a Pittsburgh victory, but he also grounded into a first-inning 5-4-3 triple play. He went hitless in four trips to the plate in game one of a holiday doubleheader on May 30 against the Cardinals. Game two would be a totally different story.

St. Louis won the first game, 7-2. With the victory, St. Louis was in second place, 22-13, 4½ games ahead of fourth-place Pittsburgh (18-18). Both clubs, along with the Chicago Cubs, were chasing the front-runner Cincinnati Reds in the National League. A crowd of 14,178 was on hand to celebrate Decoration Day (later known as Memorial Day) in St. Louis.

The second-game pitchers for both clubs were making their first starts of the season. The Cardinals sent left-hander Clyde Shoun to the mound. Shoun had pitched 15⅔ innings out of the bullpen over seven games with a 2.30 ERA. Pittsburgh countered with Russ Bauers, a righty who had pitched 6⅓ scoreless relief innings this season but started 34 games the previous year. The Pirates struck for a run in the first when Arky Vaughan walked and Rizzo doubled to the wall in left field. This lead evaporated quickly, however, when Bauers walked Johnny Mize and Don Gutteridge in the Cardinals second inning. Enos Slaughter doubled to the wall in left, scoring both, and then made it to third on a wild pitch. Herman Franks’ sacrifice fly to center scored Slaughter to give St. Louis a 3-1 lead.

The hits kept on coming for the Cardinals in the third. With Stu Martin on first, Pepper Martin hit a sure double-play ball, but Lee Handley’s throw from third was dropped by second baseman Bill Brubaker. Joe Medwick doubled in both Martins to make the score 5-1 and end the day for Bauers. Right-hander Bill Swift came in from the bullpen to try to stop further damage, but allowed a triple to Mize, scoring Medwick, and Slaughter’s bloop double to right, scoring Mize. The Cardinals enjoyed a 7-1 lead, and were primed for a doubleheader sweep.

The score remained 7-1 into the fifth. Shoun walked both pitcher Swift and Paul Waner. With two out, Rizzo blasted his second home run of the season, into the left-field seats, and all of a sudden the Pittsburgh deficit was 7-4, with Rizzo accounting for all four runs. After a walk, right-hander Mort Cooper replaced Shoun on the mound, and retired the Pirates. Swift retired the side in order in the fifth and sixth innings, but St. Louis still held a three-run lead.

In the seventh, Vaughan walked and Rizzo singled him to second. A walk to rookie Fern Bell loaded the bases with one out, and right-hander Curt Davis relieved Cooper. Brubaker lined out to left field and Medwick’s quick throw forced the runners to hold. Gus Suhr singled to right, scoring Vaughan and Rizzo, cutting the deficit to 7-6. Handley’s single to left tied the score, but pinch hitter Lloyd Waner lined out to retire the Pirates. The game was now even in the bottom of the seventh. Lloyd Waner stayed into the game to play center field and Ray Berres went in to catch for the Pirates. Swift hurled another scoreless inning, and the game remained tied into the eighth.

Swift reached first on a bunt down the third-base line that St. Louis hoped would roll foul. He moved to third on Paul Waner’s double to right center. Though Rizzo was 3-for-4 with four RBIs, St. Louis opted to pitch to him with the bases loaded, intentionally walking Vaughan. Rizzo cleared the bases with a double to left center, giving the Pirates a 10-7 lead. “The ball was hit with such force that it bounded off the wall, away from Medwick and Pepper Martin,” wrote Lester Biederman of the Pittsburgh Press.1 The hit drove Curt Davis from the game in favor of right-hander Bob Bowman. He surrendered a fly ball to Handley that scored Rizzo and extended the Pirates’ lead to 11-7. In the bottom of the eighth, Swift gave up a leadoff single to Medwick and a double to Slaughter to cut the Pittsburgh lead to 11-8, but pinch-hitter Don Padgett popped out to third to end the inning.

Mickey Owen, who had caught all of game one for St. Louis, now went in to catch the ninth inning. Bowman allowed a one-out single to Paul Waner. Vaughan bunted to third and Gutteridge threw to an uncovered second base the ball ending up in right center for an error. Waner scored from first and Vaughan took third. Interestingly, with first base open, Rizzo was pitched to again … and he drilled his second home run of the contest. He finished the game 5-for-6 with two doubles and a single and nine RBIs. He scored four runs. The polite St. Louis crowd by this point was cheering Rizzo “despite their rude awakening to the realization that the big Italian boy was wrecking their favorites with his blasts in and out of the park,” wrote Edward F. Balinger in the Pittsburgh Post-Gazette.2

Swift pitched a scoreless ninth, locking up the 14-8 victory. He completed 6⅔ innings of relief, allowing only five hits and one earned run, and striking out five in his first win of the season. Davis, who allowed four earned runs in two-thirds of an inning of relief, took the loss and fell to 7-3. The game took 2:26 to play. Pittsburgh’s 14 runs came on 14 hits and one Cardinals error. St. Louis had eight runs on seven hits and one Pittsburgh error. The Pirates left nine on base and the Cardinals stranded three. While the Pirates would fight to stay above .500 into early August, they were far out of the pennant race. An 8-22 month of August sank them to a sixth-place finish at 68-85. The disappointing season ended the managerial career of Pittsburgh legend Pie Traynor.

Rizzo had two of his six home runs for the season that day in St. Louis, and his nine RBIs represented 16 percent of his 1939 total of 55. Despite having a strong rookie season, Rizzo fizzled to a mediocre five-year career, batting .270 with 61 home runs and 289 RBIs, ending his major-league career with the Cincinnati Reds, Philadelphia Phillies, and Brooklyn Dodgers.

But Rizzo’s feat of nine RBIs in a game was still a Pirates record as of 2018.

This article appeared in “Moments of Joy and Heartbreak: 66 Significant Episodes in the History of the Pittsburgh Pirates” (SABR, 2018), edited by Jorge Iber and Bill Nowlin. To read more stories from this book at the SABR Games Project, click here.

In addition to the sources listed in the Notes, the author also consulted Baseball-reference.com, Retrosheet.org, and “Detail on Pirates’ Games,” Pittsburgh Post-Gazette, May 31, 1939: 17.