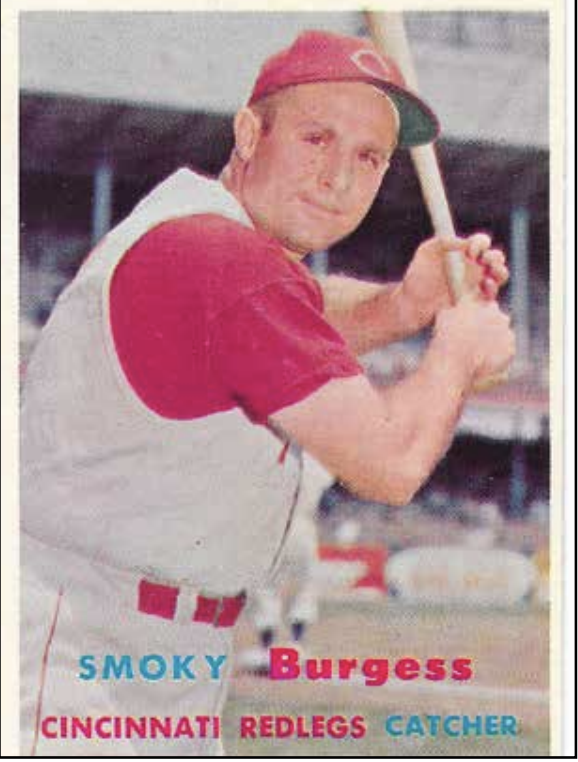 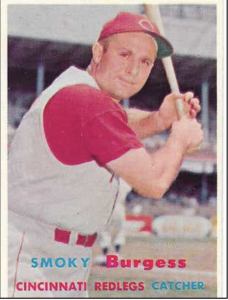 On a clear and cool day, the Cincinnati Redlegs and Chicago Cubs prepared for an early May finale of a five-game series at Wrigley Field. A Cubs vice president estimated that the team lost at least 100,000 fans to unstable Chicagoland weather during this 10-game homestand.1 Another small crowd (5,936) entered the turnstiles at Clark and Addison with a forecast high of 53 degrees.

Cubs manager Bob Scheffing was pleased that his 13-7 squad had won six of eight. Chicago was in sole possession of first place in the National League by a half-game over the defending World Series champion Milwaukee Braves. It was their best start since 1947, and that was five “field bosses” ago.2 Scheffing tabbed right-hander Dick Drott, who was 15-11 in 1957, and finished third in Rookie of the Year voting. The 21-year-old Drott was 1-0 with a 5.47 ERA in four starts and a short relief outing. A nagging groin injury had bothered his mound stability this season.

Cincinnati skipper Birdie Tebbetts opined that Chicago should continue to do well if shortstop Ernie Banks and center fielder Bobby Thomson stayed sound. Tebbetts labeled the nucleus of Drott, Moe Drabowsky, and Don Elston as three of the best pitchers in the eight-team league. “What scares me about the Cubs is that they beat us three out of four without throwing Drott or Drabowsky at us,” said Tebbetts.3

The Redlegs at 8-8 were in fifth place a game out of the first division. Right-hander Tom Acker took the hill. The 28-year-old spot starter had no decisions with a 3.00 ERA in three appearances. Cincinnati’s current roster listed nine players who had once been under contract with the Cubs: Steve Bilko, Smoky Burgess, Dee Fondy, Don Hoak, Hal Jeffcoat, Johnny Klippstein, Turk Lown,4 Bob Thurman,5 and Pete Whisenant.

Drott was not sharp: He walked leadoff hitter Johnny Temple and hit Frank Robinson with one out. After a double steal, George Crowe doubled both runners home for a 2-0 Cincinnati lead.

Tony Taylor and Lee Walls singled off Acker to open Chicago’s offense. Banks reached on a force that moved Taylor to third, and he eventually scored on Walt Moryn’s sacrifice fly. Dale Long belted a drive high off the receding portion of the right-field wall. Banks sprinted around the bases to tally standing up, but confusion reigned at the conclusion of this play.6

Second-base umpire Jocko Conlan appeared to signal that Long’s shot was a two-run homer, but he was actually pointing to where the sphere was touched by a fan after it had bounced off the top of the barrier. Accordingly, the safety was a ground-rule double and Banks was sent back to third.7 Both runners were stranded as Thomson took a called third strike.

An easy second inning materialized for Drott as he retired the Redlegs in order. Tempers flared before the teams exchanged sides when plate arbiter Hal Dixon ejected Temple for throwing his bat in the air after a called strike three. Tebbetts marched out to confront Dixon, and he also received the heave-ho.8

Alex Grammas replaced Temple in the lineup at second base, and third-base coach Jimmy Dykes took over the Cincinnati reins. Acker was in trouble immediately when consecutive hits by Johnny Goryl and Sammy Taylor were followed by Drott’s bunt single to load the bases. Goryl tagged and scored on Tony Taylor’s fly ball to knot the contest, 2-2.

Vada Pinson was plunked to start the third, and Scheffing visited with Drott. It was determined that the hurler needed to be removed.9 Drott dejectedly trudged off as Ed Mayer entered. The 26-year-old rookie southpaw got out of the frame unscathed. Mayer had thrown 5⅔ hitless innings in the second game of a doubleheader four days before.

Acker and Mayer matched zeroes until the bottom of the fifth, when Walt Moryn opened with a home run to give the Cubs the lead. His fifth homer was a tremendous blast to right that sailed over the back screen and landed on Sheffield Avenue.10 Acker’s day ended when Long followed with another double. Right-hander Willard Schmidt was summoned to quiet Chicago’s bats. Schmidt managed to secure two outs, but his ERA jumped from 1.50 to 5.40 within a six-batter spread.

Goryl doubled Long home for a 4-2 advantage. Mayer singled in Goryl for his first (and only) major-league RBI. A hit by pitch and a walk loaded the bases, so Dykes summoned Bill Wight to relieve. Banks greeted the lefty veteran with a two-run single to keep the “yellow-colored numbers” changing on the scoreboard. The Cubs were up 7-2 when the inning ended.

The curveballing Mayer permitted a pair of sixth-inning hits, but Cincinnati did not score off him.11 Long started the Cubs’ sixth by tagging a deep drive to the right-center bleachers for an 8-2 mark.12 It was the left-handed slugger’s third home run of the year and his third extra-base knock of the day.

Mayer’s two-out bases-loaded situation in the seventh caused Scheffing concern as Robinson batted. Scheffing realized that Robinson, who was struggling to drive in runs, could break out at any time. The right-handed Elston entered to stifle the threat, and he secured an inning-ending fly out. Left-hander Joe Nuxhall relieved for Cincinnati in the bottom half and put Chicago down in order in this and the following frame. Elston, who entered with an ERA of 0.82 avoided eighth-inning trouble and stranded two more runners.

Elston attempted to finish his fifth game of the season; however, his luck turned. Whisenant walked, and left-handed pinch-hitter Dee Fondy pulled a sharp double-play grounder that Tony Taylor fumbled13 for the rookie second baseman’s fifth error of the season. Lefty swinging Jerry Lynch delivered a pinch single to plate the first Cincinnati tally since the opening frame.

Robinson singled home Fondy to close the spread to 8-4. Rookie right-hander Dolan Nichols replaced Elston, and George Crowe grounded to the right side. Taylor gloved this one and fired to second for the force. Banks did not get off a relay; the ball became stuck in his glove’s webbing.14 Hoak blistered a groundball to third, and Goryl crouched to scoop it and begin an around-the-horn game-ending double play. However, the ball glanced off a pebble and bounded over Goryl’s head for another run-scoring hit.15 The Redlegs now trailed 8-5.

Ed Bailey continued the surge with a single to right to make it 8-6. Pitcher Harvey Haddix (who was the tying run) came in to run for Bailey. Gus Bell fashioned a similar run-scoring hit, and it was 8-7. Haddix advanced to second, and Scheffing went to right-hander Freddy Rodriguez. Fred Hatfield was scheduled to get his first at-bat with Cincinnati, but the reserve infielder was lifted for Burgess. The pudgy, lefty-swinging catcher smacked the first pitch, a screwball from Rodriguez, deep into the right-center-field bleachers for a three-run homer.16 It was his first round-tripper of the season, and the Redlegs had a 10-8 lead. Two batters later, right-hander Dave Hillman entered and mercifully secured the third out while stranding a runner.

Cincinnati parlayed eight runs from an error, two walks, five singles, and a home run as 12 batters faced four Chicago pitchers. A trio of prospective double-play grounders generated one putout. Ironically, Tebbetts had been questioned before the game about momentum turns. He stated prophetically, “A team gets careless and makes a mistake. That’s all there is to it.”17

Cincinnati had used 22 players by this time. Dykes’s ninth-inning substitution assignments looked like a laundry list to the home-plate umpire.18 Jeffcoat was on the mound, Burgess was catching, Whisenant moved from right field to second base, Robinson relocated from left to third, Hoak switched from third to shortstop, Fondy went to left, and Lynch to right. These changes had several Redlegs playing out of position, but that proved to be a nonfactor as Chicago was thoroughly shell-shocked. The Cubs, who had a sure victory snatched away, were retired quickly and quietly in their final at-bat.

Left-on-base numbers were 10 for the Redlegs and nine for the Cubs. The line score displayed Cincinnati with 10 runs, 11 hits, and no errors. Nuxhall (1-0) picked up the win while Jeffcoat achieved his fourth save. Chicago had 8 runs on 13 hits with one very costly error. Nichols (0-2) was charged with the loss, and the contest lasted 3:04.

After this stunning defeat, the Cubs lost 11 of their next 13 games to bid adieu to first place. Scheffing did not panic with wholesale changes, but his team’s solid defense had naturally acquired the jitters.19 Chicago ended up fifth, tied with St. Louis, at 72-82.

The Redlegs did not channel the comeback into a lengthy winning streak as they fell victim in 9 of their following 11 contests. Tebbetts eventually resigned for health issues in early August,20 with Dykes taking over as fourth-place Cincinnati ended 76-78.

In addition to the sources cited in the Notes, the author accessed Retrosheet.org, Baseball-Reference.com, Newspapers.com, SABR.org/bioproject, and The Sporting News archive via Paper of Record.

2 Despite being 14-7 and in first place on May 11, 1947, the Cubs ended up sixth under the direction of Charlie Grimm. He was followed by Frankie Frisch, Phil Cavarretta, and Stan Hack.

4 Smith, “Deal Prompts No Celebration.” Lown was traded to Cincinnati for pitcher Hersh Freeman the morning of this game.

5 Rick Swaine, “Bob Thurman,” SABR Baseball Biography Project, https://sabr.org/bioproj/person/23f9d960. Although Thurman never suited up for the Cubs, he had a contract to play for the organization. Cincinnati bought Thurman’s pact from the Cubs in 1955.

9 Prell, “Redleg 8 Run 9th Jolts Cubs from 1st.” Drott was admitted to Wesley Memorial Hospital for observation. His injury was diagnosed as a ruptured blood vessel on the inner side of his right thigh.