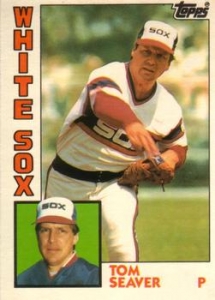 George Bernard Shaw once wrote, “Baseball has the great advantage over cricket of being sooner ended.”1 On May 8 and 9, 1984, the Chicago White Sox and Milwaukee Brewers challenged that notion, playing the longest major-league game by time at 8 hours and 6 minutes.2 Along the way to the White Sox’ 7-6 win over the Brewers in 25 innings, the 14,754 spectators at Comiskey Park were treated to 13 runs, 43 hits, 4 errors (almost all of them costly), and sleep deprivation. “That was the most unbelievable game I’ve ever seen,” Brewers catcher Jim Sundberg said. “Guys dropping balls. Bad baserunning. A coach grabbing a guy. It was amazing.”3

Neither team entered this game playing well. The Brewers, although having outscored their opponents by 18 runs in 26 games sat at .500, 9½ games behind the surging Detroit Tigers in the AL East.4 The defending AL West champions were worse off in fifth place at 12-15, 3½ games behind the California Angels. Taking the mound this day would be future Hall of Famer Don Sutton for the Brewers and Bob Fallon, making his third career start for the White Sox. Sutton’s baseball journey ended in Cooperstown. Fallon’s major-league season did not survive the game; he was sent to the White Sox’ Triple-A affiliate in Denver after the game.5

Despite the contrast in careers, Fallon was Sutton’s equal on this chilly May night. Fallon faced the minimum through six innings, surrendering a single in the third and walks in the first and fourth innings, all eliminated by double plays. (The Brewers pulled off six in all.) Sutton was not quite as efficient as Fallon, walking two in the first inning, and allowing two singles in the third, but with no damage to the scoreboard. The Brewers gifted the White Sox a run in the sixth. Greg Walker singled with one out and stole his first base of the season after Greg Luzinski fouled out. Walker should have been stranded on second, but Brewers third baseman Randy Ready dropped Harold Baines’ foul popup. Baines walked, and the White Sox’ Tom Paciorek singled in the first run of the game. Ready redeemed himself by scoring the tying run in the seventh, getting a leadoff walk and making it 1-1 on singles by Sundberg and Robin Yount. The Brewers lost their chance to take the lead when Sundberg was caught trying to score from third on Ted Simmons’s grounder to third baseman Vance Law. It wasn’t Sundberg’s day on the basepaths; in the 11th inning he was thrown out after taking too large a turn at first on his single.

The Brewers took a 3-1 lead in the top of the ninth off White Sox left-hander Britt Burns, who had temporarily lost his spot in the rotation to Fallon. Yount led off with a double to left, and with one out stole third and scored on catcher Carlton Fisk’s throwing error. Simmons singled, moved to second on a wild pitch, and scored on Ben Oglivie’s single to center. Pitcher Rollie Fingers came in seeking his fifth save of the year, but more sloppy fielding by the Brewers took that chance away. Right fielder Charlie Moore dropped Paciorek’s fly, allowing him to get to second. “I screwed it up. What can I say?” Moore said after the game. “I got there in plenty of time. I closed my glove too fast.”6 Fingers retired the next two batters, but Julio Cruz’s double over Oglivie’s head scored Paciorek, and Rudy Law’s single plated Cruz with the tying run and saddled Fingers with his first blown save in nearly two years. That ended the scoring for the day, but not the baseball.

Extra innings were becoming common for the Brewers — this game would be their fifth extra-inning game of their last eight. The White Sox had played only two so far in 1984, both 10-inning walk-off wins. The Brewers had runners on in every inning from the 10th to the 13th, but Sundberg’s baserunning error in the 11th and pitcher Al Jones’s pickoff of Jim Gantner at second base in the 13th killed rallies. White Sox bats were quiet until the 13th, when they had runners at first and second with two out after a double by Baines off Tom Tellmann and an intentional walk to Paciorek, but could not bring the winning run home. The White Sox had the bases loaded in the 14th with one out after three singles, but Rick Waits struck out pinch hitter Marc Hill, and Dave Stegman popped up to end the threat.

This was becoming a late night. The fans were treated to a second helping of “Take Me Out to the Ball Game” in the middle of the 14th, and around midnight, the scoreboard operator played the ever-popular game “Can you remember tonight’s attendance?”7 The 15th through 17th innings went by without incident, and when Baines grounded out to second to end the 17th on the 506th pitch of the game, it was 1:03 A.M. and AL rules called for the game to be suspended.8 “When it’s 1 A.M., it’s time for little kids and ballplayers to be in bed,” said Tom Seaver.9 “We should have won the game in nine,” moaned Brewers manager Rene Lachemann. “We didn’t play very good defense, and we didn’t have baserunning.”

The game would resume quickly — in 17 hours, at 6:30 P.M. before the teams’ next game. Lachemann had slated Chuck Porter to start that day’s game, but with the Brewers having gone through five pitchers already, Porter started the 18th, replacing Watts. “If the first game didn’t go too long then I would start the second game. Then they were going to bring in Bob McClure in when I got tired,” Porter said.10 Juan Agosto, who had thrown four innings for the White Sox when the game was suspended, got the ball back as it resumed, throwing three more. Ron Reed took over for the White Sox in the 21st, and after retiring the first two hitters gave up a single to Cecil Cooper, a walk to Simmons, and a three-run home run to Oglivie. Normally that might be enough for the Brewers, but normal had left this game 12 innings earlier. Rudy Law hit a groundball to third that Ready threw into the grandstand and the White Sox were in business. Fisk’s single scored Law from second, and after a single by Hill, Paciorek’s single to center scored Fisk and White Sox starter Richard Dotson, running for Hill, and the game was tied again, 6-6. There appears to be no record of the playing of “Take Me Out to the Ball Game” for the 21st-inning stretch.

The White Sox nearly ended the game in the 23rd when Stegman singled to lead off the inning, and after a fly out Paciorek got his fifth hit of the game. Unfortunately for Stegman, he couldn’t hit the brakes rounding third and ran into the arms of third-base coach Jim Leyland, or barely touched him, depending on your dugout. Lachemann claimed interference, and first-base umpire Ted Hendry agreed, calling Stegman out. White Sox manager Tony La Russa played the remainder of the game under protest. “I interpret the ruling to mean that the coach has to physically assist the runner,” said La Russa. “I don’t think Leyland did that.”11 Leyland for his part claimed innocence. Gesturing toward the manager’s office, Leyland joked “You have to talk to my lawyer.” (La Russa has a law degree.)12 Vance Law’s single after the incident would have scored Stegman.

The White Sox brought in their scheduled Wednesday starter, Seaver, to pitch the top of the 25th. The future Hall of Famer had not pitched in a relief role since 1976, but the White Sox were just about out of warm bodies. Their only player to have not appeared in the game once Seaver came in was LaMarr Hoyt, who had started the game before the marathon. “I didn’t feel comfortable coming in in relief,” said Seaver,13 but after giving up a leadoff single to Bill Schroeder, he got Yount to ground into his third double play of the game and retired Cecil Cooper on a fly ball to left, setting up the fateful bottom of the 25th. Dave Stegman struck out when he bunted foul with two strikes. (He had five K’s in the game.) Not to worry. Baines stepped up, drove a 420-foot blast to center,14 and the longest game in the major leagues ended, making a winner of Seaver. “I think I found myself out at the plate before the ball went over the wall,” exclaimed La Russa.15 “I wish it would have went a little longer,” said Porter, who took the loss.16 The White Sox scoreboard operator spoke for everyone else, putting up “Thanks Harold!” on the center-field scoreboard at 9:12 P.M., 25 hours and 42 minutes after the game started.17

As scheduled, Seaver started the scheduled game. He pitched 8⅓ innings and won, 5-4. The game lasted 2 hours and 9 minutes.

In addition to the sources cited in the notes, the author accessed Retrosheet.org, Baseball-Reference.com, SABR’s BioProject via SABR.org, The Sporting News archive via Paper of Record, and the Chicago Tribune via newspapers.com.

4 The Tigers won their first nine games in 1984, and were 23-4 on May 8. They went wire-to-wire to win the AL East, and lost only one postseason game on their way to winning the World Series.