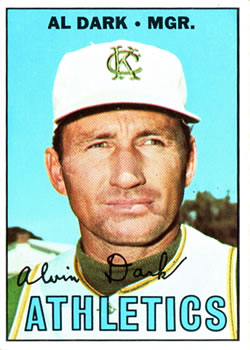 The Kansas City Athletics donned their uniforms and white shoes (those same shoes that caused such a controversy at the season’s beginning) for the last time — or at least with the name Kansas City behind it. What started as a season of optimism ended like so many others, in last place, only this time there would be no more next year for the Kansas City faithful.

Coincidentally, on the last day of the season it was reported that Alvin Dark, who had been fired as the A’s manager in August, had been hired to manage the Cleveland Indians.1

In a strange twist, Dark would replace Joe Adcock in Cleveland, the manager and team who objected to Dark’s Athletics’ white shoes in the opening game of the season. There is certainly some irony here although Dark only defended the shoe selection and was not the mastermind behind them, so no one should expect the Indians to wear them next season.

This game as well as most other major-league games today would be overshadowed by the Minnesota Twins-Boston Red Sox game at Fenway Park in Boston. The National League’s St. Louis Cardinals had already clinched and were waiting to see who their opponent would be in the World Series. This game, the less than stellar seasons the Athletics and the New York Yankees were having, and even the fact that it was a pro-football Sunday all likely contributed to the small turnout of 6,956 patrons at Yankee Stadium.2 The sparse crowd witnessed history: They were the last people who would see the Kansas City Athletics play.

For all the Athletics’ disappointment, their opponent this day had seen better years, with the Red Sox, not the Yankees, being the talk of baseball in 1967. Gordon S. White Jr. of the New York Times wrote, “The biggest cheer at Yankee Stadium yesterday came when the scoreboard message sign flashed: ‘Red Sox lead, 3-2, still batting in bottom of the 6th.’”3

And no wonder. The Red Sox had been fighting for the pennant almost all season. The Yankees, a mere whisper of their glorious past, were 71-90 and firmly entrenched in ninth place in the 10-team American League. The only team worse was the Athletics, who were in 10th place with a 62-98 record entering the game.

The pitching match-up for the season finale pitted Jim “Catfish” Hunter (13-16) for the Athletics against the Yankees’ Mel Stottlemyre (14-15).

The scoring started in the bottom of the second inning when the Yankees got a run against Hunter. Roy White and Frank Fernandez walked to lead off the inning. With Mike Hegan at bat, White and Fernandez pulled off a double steal, and on catcher Dave Duncan’s errant throw to third, White scored an unearned run. Hunter then struck out Hegan, got John Kennedy on a fielder’s choice grounder to third base, and retired Stottlemyre on a popup to shortstop.

Stottlemyre struck out the side in the third inning, but gave up the tying run in the fourth. Ted Kubiak led off with a single to center field. After John Donaldson flied out, Mike Hershberger singled to right, sending Kubiak to third base, and Kubiak scored on Rick Monday’s fly ball to center field. Stottlemyre got Jim Gosger on a liner to second for the third out.

The game remained tied until the bottom of the seventh inning, when Frank Fernandez untied it with a leadoff home run, the first of his career, against Hunter, who recovered to strike out the side.

The Yankees’ lead was short-lived. Dave Duncan led off the top of the eighth inning with a home run. Hunter then doubled to left and went to third on Kubiak’s sacrifice, but Stottlemyre escaped further damage, retiring Donaldson and Hershberger.

The Yankees quickly retaliated. Hunter walked Jerry Kenney with one out. Tom Shopay fouled out, but Joe Pepitone followed with a two-run homer, giving the Yankees a 4-2 lead. The home run, Pepitone’s 13th of the season, was the Yankees’ 100th, noted the Times’s Gordon White.4 The Kansas City Times took note of the fact that the Yankees had extended their American League record to 22 straight seasons hitting 100 or more home runs.”5 Roy White singled to center field, but Hunter retired Frank Fernandez on a popup to shortstop.

In the ninth inning the Athletics made a game effort to end their Kansas City tenure on a winning note. Rick Monday and Jim Gosger led off with singles. With runners at first and third, Steve Hamilton relieved Stottlemyre. Ramon Webster hit a run-scoring grounder to second. The Yankees made another pitching change, bringing in Dooley Womack, who walked .6 But Womack struck out Dave Duncan and retired pinch-hitter Sal Bando on a fly ball to right, preserving Stottlemyre’s victory.

With Bando’s fly ball, the history of the Kansas City Athletics came to an end. Even on this day the words Oakland and Athletics were being used in the same sentence. “The A’s, who may be the Seattle A’s or the Oakland A’s or some other A’s next season …”7 The following year would be the beginning of the Oakland Athletics. Many of those players who appeared on the 1967 team would play in Oakland in 1968 and in the years following. This same group of players would have much different results than what they experienced in 1967 in the seventies, winning three consecutive World Series in 1972, 1973, and 1974.

6 Bert Campaneris came on to pinch-run for Talton.