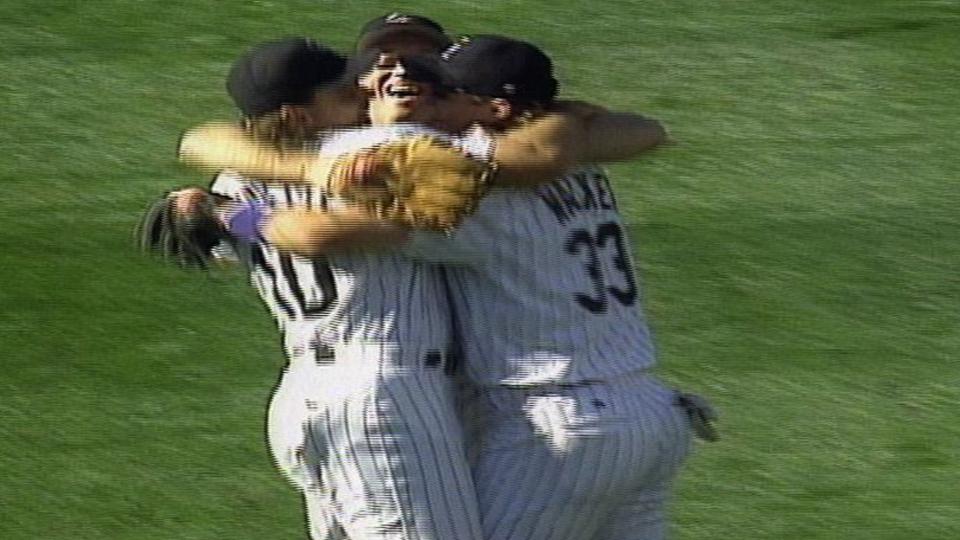 The required result was simple: Win and they’re in. In their third season as a major-league franchise, the Colorado Rockies stood on the brink of qualifying for the baseball postseason faster than any previous expansion team. To be sure, the Rockies’ postseason quest was aided by the introduction of the wild card, an innovation that would have been implemented in 1994 but for the season-ending strike and subsequent cancellation of the postseason. It is doubtful the Rockies cared. All that mattered was that defeating the San Francisco Giants would lead to a National League Division Series date with the Atlanta Braves. A Rockies loss, combined with a win by the Houston Astros at Wrigley Field, would promise nothing more than a one-game playoff to determine the NL wild-card team.

To secure the win, Rockies manager Don Baylor turned to two-time Cy Young Award winner Bret Saberhagen. Acquired from the New York Mets in a July 31 trade, Saberhagen was intended to be the final piece in assembling a playoff-caliber roster. The Rockies had signed outfielder Larry Walker and pitcher Bill Swift through free agency before the season. Battling a sore shoulder that would necessitate offseason surgery, Saberhagen aspired for 85 pitches and a lead through five or six innings.1 The Giants, on the other hand, had nothing to play for aside from pride. Winding up a last-place season, manager Dusty Baker started Joe Rosselli for the first time since July 7.

Marvin Benard opened the game for the Giants with a single through the gap between second baseman Eric Young and first baseman Andres Galarraga. Mike Benjamin advanced Benard to second base with a sacrifice bunt before Barry Bonds struck out looking. With two out, Matt Williams launched the ball over the left-field fence and through the front door of Buckaroos restaurant for a 2-0 Giants lead.2 Saberhagen earned his second strikeout of the inning against Mark Carreon to end the Giants first. Leading off the Rockies’ half of the inning, Young lofted a fly ball into center field for a triple. Joe Girardi popped up, but Dante Bichette sent a fly ball to deep right field. While Carreon made the catch, Bichette’s fly had enough distance to bring home Young. Walker’s grounder to first baseman J.R. Phillips ended the inning, but the Rockies had halved the deficit to 2-1.

In the second inning, Phillips restored the Giants’ two-run advantage by slamming Saberhagen’s pitch against the upper-deck facing in right-center field.3 Rich Aurilia doubled to center field in the next at-bat, but the Giants could not add to the 3-1 lead. The Rockies gained a run back in the bottom of the inning. Following Galarraga’s leadoff fly to Benard in center field, Ellis Burks lined a triple into left. Burks scored on Vinny Castilla’s long fly ball to Bonds in left-center field, and Walt Weiss ended the inning with a short fly to Carreon.

The Giants offense continued to attack Saberhagen in the third and brought his afternoon to an early conclusion. Benjamin lined the ball to left-center for a leadoff single. With Bonds at the plate, the Giants second baseman swiped second base. The steal set up Benjamin to score when Bonds doubled to right field. Weiss’s error on Williams’s groundball put runners at the corners for Carreon. His double to left field scored Bonds and Williams for a 6-2 lead. After Saberhagen walked Phillips — the fifth Giant to reach base with none out — Baylor summoned Mark Thompson from the bullpen. Saberhagen’s day ended well short of the goal he established for himself. The Colorado starter commented, “I just didn’t have very good stuff today.”4 Saberhagen’s pitching line worsened after his exit as Aurilia and Kirt Manwaring hit sacrifice flies that plated Carreon and Phillips, respectively. The wild-card-chasing Rockies trailed, 8-2.

Assuming Saberhagen’s spot in the batting order, Thompson hit a short fly ball to the left-field line for a leadoff single in the Rockies’ third. Although hobbled by a sore hamstring just days earlier,5 Young walloped the ball over the center-right fence to cut the deficit to 8-4. Three batters later, Walker homered with Girardi (infield single) on second for an 8-6 score. The home run was Walker’s 36th of the campaign and put his RBI tally into triple digits, more than justifying the expense in bringing him from Montreal to Denver. “It wasn’t my money (that signed Walker),” Baylor said. “But money well spent is right.”6 Baker replaced the faltering Rosselli with Mark Leiter. (Rosselli would never pitch again in the majors.) Leiter had started and pitched into the seventh inning of Friday night’s game, making the switch seem a bit curious. With Leiter’s record at 10-11, Baker admitted the move was done to get him to .500.7 Although Leiter got out of the inning on grounders from Burks and Castilla, the move would not work as Baker intended.

Neither team scored in the fourth inning, and the Giants left two on base in the top of the fifth. Girardi opened the Rockies’ fifth by doubling to left field; he held second base on Bichette’s infield single to third baseman Williams. Walker’s single through the right side of the Giants’ infield scored Girardi and advanced Bichette to third. Bichette scored easily on Galarraga’s groundball double to left field, tying the game at 8-8. Leiter struck out Burks for the first out, but surrendered the lead on the second out as Walker scored from third base on Castilla’s grounder to Aurilia. Weiss’s fly ball dropped in short right field for a run-scoring double as Galarraga crossed the plate for a 10-8 Rockies lead. Leiter intentionally walked pinch-hitter John Vander Wal to set up the force, but Young’s fly to Bonds actually provided the final out. As the inning ended with the Rockies ahead, the right-field scoreboard announced the Astros’ 8-7 win over the Cubs. Weiss conceded later that the team was following events at Wrigley Field: “We were all watching what was going on.”8 Thus, the Rockies knew they had to win to avoid a playoff with Houston.

Since being chased from the game in the third, Saberhagen had become the Rockies’ biggest cheerleader. “When I came in after I gave up that bunch of runs, I said, ‘There’s a lot of game left. Don’t give up. Keep battling like you have all year.’”9 The Rockies had battled to the lead; now the bullpen needed to hold on to it. From his perspective behind the plate, Girardi had confidence in the relief corps. “I’ll put our bullpen up against anybody’s,” he said.10 In the sixth, Bryan Rekar allowed only a two-out single to Matt Williams. Phillips started the Giants’ seventh with a double, which was converted into a run on another Manwaring sacrifice fly. After pinch-hitter Dave McCarty hit a two-out double, Bruce Ruffin closed the door on the rally, getting Benard to ground out, keeping the score at 10-9. Darren Holmes pitched a three-up, three-down eighth inning, setting up Curt Leskanic to seal the win.

Leskanic’s previous save opportunity had ended disastrously. Tasked with closing out a 7-5 lead in Friday’s game, he coughed up four runs before being pulled by Baylor. He recovered, however, to pitch a scoreless ninth in Saturday’s 9-3 win. Leskanic struck out pinch-hitter Tom Lampkin for the first out, and Phillips stared at strike three for the second out. Down to his last out, Baker opted for pinch-hitter Glenallen Hill, who slapped Leskanic’s 2-and-1 pitch over the left side of the infield for a single. That left it for Jeff Reed, batting for Manwaring. Reed’s grounder was scooped up by Galarraga, who completed the Rockies’ 36th come-from-behind win of the season by stepping on first base for the final out. Playoff baseball would be coming to Denver.

The manner of the win, even though it was the biggest comeback of the season, had a familiar feel for the Rockies. Darren Holmes said, “That’s the way we have done it all year. We get up against the wall and seem to pull it out somehow.”11 With champagne being sprayed in the clubhouse, Walker commented, “This is the first year for this, so I don’t know how we’re supposed to react.”12 Baylor was especially happy for those players who had been with the club since its inception. Twelve Rockies players, including Bichette, Galarraga, Castilla, and Young, were selected in the November 1992 expansion draft or signed as free agents shortly afterward.13 Walker, who never experienced playoff baseball in seven seasons in Montreal, was determined to enjoy the moment. The right fielder said, “We’re going to enjoy this for now. We’re going to take a day off and then worry about the Braves. This is celebrating time.”14

In addition to the sources cited in the Notes, the author also referred to baseball-reference.com and the San Francisco Chronicle.