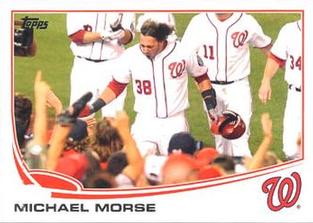 The Nationals’ magic number was one. Either a Nationals win or a Braves loss would clinch Washington’s first NL East Division Championship. There were only three games to play in the regular season, so it seemed as if the championship was the Nationals to lose. They had been up as much as 8½ games less than three weeks earlier, but their lead had slipped to three games. The crowd of 35,387 was hoping for a memorable night: The attendance was up over 10,000 from previous Monday night games, despite the cool and breezy 64 degrees at game time. For their part, the Phillies (80-79) were playing out the season in third place, 16 games behind the Nationals.

John Lannan (4-0, 4.23 ERA) took the mound for the Nationals. Despite being a dependable starter for the Nationals in 2011 (10-13, 3.70 ERA), in spring training he lost his spot in the starting rotation to Ross Detwiler. Lannan had spent most of 2012 (24 games) in Syracuse, returning to the major-league roster in September after Stephen Strasburg was shut down for the year.1 Kevin Frandsen opened with a single but was erased when John Mayberry grounded back to Lannan, starting a double play. Chase Utley flied out for the third out. The Nationals accomplished nothing against Kyle Kendrick (10-12, 4.08 ERA) in the bottom of the first.

Lannan opened the second inning by walking Carlos Ruiz on four pitches. After Ty Wigginton popped out to Adam LaRoche in foul territory, Domonic Brown singled. Darin Ruf worked the count full, then tripled, scoring Ruiz and Brown. He made it to third on the fly ball because Bryce Harper missed the catch: Both Harper and the ball bounced off the angled wall near the visitors’ bullpen. When Harper stumbled against the bullpen fence, Michael Morse corralled the ball and threw it in, holding Ruf at third. He was stranded there when Michael Martínez grounded out and Kendrick struck out. The score was 2-0, Phillies.

In the bottom of the second, LaRoche grounded out but Morse and Ian Desmond followed with singles. Danny Espinosa grounded out, advancing the runners. With the pitcher’s spot up next, Phillies manager Charlie Manuel chose to walk the light-hitting Kurt Suzuki (.266) and pitch to the lighter-hitting (.125) Lannan. That paid off: Lannan grounded out to the shortstop, leaving the bases loaded.

The top of the third was nearly identical to the top of the first: Frandsen singled, Mayberry grounded into a double play, and Utley was out on a foul pop fly. Kendrick got three groundouts in the bottom of the frame from the heart of the Nationals lineup. The whole inning took 22 pitches.

Lannan got into a jam in the top of the fourth. Ruiz grounded out, Wigginton singled, and Brown doubled, with Wigginton held at third. Even with just one out, Nationals manager Davey Johnson chose to walk Ruf and his .320 BA this time, and pitch to Martínez and his .173. The intentional-walk strategy worked again. Martínez grounded to first, LaRoche stepped on the bag and threw back to Suzuki, who was standing on the third-base line waiting for Wigginton, who just walked up to Suzuki to be tagged. In the bottom of the fourth, Kendrick got three more groundouts.

Lannan had a much easier top of the fifth. He finally retired Frandsen, although he did walk Mayberry. In the bottom of the fifth Kendrick got Espinosa to ground out, then Suzuki singled. An out later, Kendrick attempted to pick off Suzuki but threw the ball past first, so Suzuki scooted to third as the ball bounced around in foul territory. Roger Bernadina, batting for Lannan, flied out. Suzuki was left at third when Jayson Werth was called out on strikes.

Meanwhile, the Nationals fans in the park were watching the center-field scoreboard. In Pittsburgh, the Pittsburgh-Atlanta game was moving a little faster than the game in DC. Since it didn’t seem that the Nationals were doing much against Kendrick, clinching the division might turn on the other game. That game had been tied 1-1 through the top of the fifth, but when Starling Marte broke the tie with a home run for Pittsburgh in the bottom of the fifth, cheers of “Let’s Go Pirates!” echoed through Nationals Park.2

Craig Stammen pitched the top of the sixth for the Nationals: 13 pitches, three swinging strikeouts. Harper opened the bottom of the sixth with a double and advanced to third on Ryan Zimmerman’s pop fly. He was left there when LaRoche popped out to short (too shallow to score), and Morse struck out looking.

Stammen repeated his three-swinging-strikeout performance in the top of the seventh, although it did take him 17 pitches this time. In the home half, Desmond grounded out on the first pitch. Two more strikeouts for Kendrick, and that was it for that inning.

Ryan Mattheus took the mound for the Nationals in the top of the eighth and made short work of the Phillies: two lineouts and a strikeout on nine pitches. The Phillies’ Justin De Fratus came on in the bottom of the eighth. Steve Lombardozzi lined out, then Werth singled. Harper worked the count full and walked. Although De Fratus got Zimmerman to fly out for the second out, Manuel decided to replace him with left-handed Jeremy Horst to face LaRoche. The strategy worked: LaRoche struck out looking at his fifth pitch.

Drew Storen pitched the top of the ninth, inducing two lineouts and a groundout on an efficient eight pitches. But meanwhile the action was off the field: people’s phones relayed that the 2-1 Pittsburgh score had held, the Braves had lost, so the Nationals were the National League East Division champions. A wave of joy swept through the park. Fans in the front row yelled to the Nationals in their dugout, and the cheering was on even as Storen was still on the mound. Then the moment everyone had been waiting for: Washington Nationals East Division Champions flashed on the video board. There were high fives and hugs in the dugout and wild cheering in the stands. Fans had made signs, including professionally printed ones, and were holding them up as the cameras panned the stands.

The Nationals were ready to celebrate with the beer and champagne in the clubhouse … but wait — this game wasn’t over. As fate would have it, Morse was up to bat in the bottom of the ninth. It was a tradition that the fans would sing along to his walkup music, “Take on Me.” The volume and enthusiasm rocked the ballpark, as the “I am a professional and this is a professional game and I’m batting” mode fought with the “We are the Champions and I am ready to party!” mode: all visible in Morse’s body language and facial expression as he took his practice swings. He stepped to the plate as the last echoes of “I’ll be gone in a day or twooooooooo” rang through the ballpark.3 He hit Phillippe Aumont’s second pitch for a quick flyout.

Desmond was also in a hurry to be done with the game: He was out swinging wildly at three pitches. Frankly, Aumont could have thrown the rosin bag and Desmond would have swung. Espinosa grounded out, and the game was over. The Nationals disappeared into their dugout as the Phillies celebrated their victory with some lackadaisical high-fives on the field and disappeared.4

The Nationals re-emerged wearing championship T-shirts over their uniforms, waved briefly at the crowd, and then disappeared down the tunnel into their clubhouse, where the alcoholic beverages awaited. The fireworks went off; the ballpark was rocking from the clubhouse to the rafters. A few minutes later Gio González emerged from the dugout waving a champagne bottle. He was followed by Morse, who somehow managed to stuff several cans of beer into his pockets: He ran around the perimeter, shaking up the beers before opening them so he could spray the fans.5 Some of the team ran around the warning track high-fiving any fans they could reach.

Eventually, the players returned to the clubhouse to continue celebrating and the fans went home. Given the party,6 it was amazing the Nationals could field a team the next day let alone win: But they did.7

For those in the stands, and for those watching or listening elsewhere, this was a moment to take Charlie Slowes and Dave Jageler’s advice:8 “Remember where you are, so you remember where you were” when Washington’s baseball team clinched its first postseason berth since 1933.

I was at this game. All the pent-up frustration of the losing Nationals’ seasons, the long years without a Washington team, the long years before that of the “Last in the American League” Senators: All that was washed away in that night’s celebration.

7 Dan Kolko, “A Bullpen Battle With an Eye on the Scoreboard Yet Again,” MASN, October 2, 2012, masnsports.com/nationals-pastime/2012/10/a-bullpen-battle-with-an-eye-on-the-scoreboard-yet-again.html. Accessed October 24, 2018.