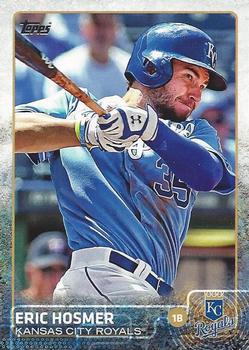 The 2015 ALDS between the defending American League champion Kansas City Royals and the upstart Houston Astros was the first time the two teams met in the playoffs. The Royals finished the regular season with a 95-67 record, winning the AL Central Division by a comfortable 12 games. The Astros, making their first playoff appearance since 2005, finished with a record of 86-76, good enough for second place in the AL West and a wild-card berth in the playoffs. The Astros were leading the series two games to one and had a chance to close it out at Minute Maid Park.

Game Four was a matchup between two promising young right-handers. The Royals started right-hander Yordano Ventura. The 24-year-old Dominican finished the season with a 13-8 record and a 4.08 ERA. He started Game One, lasting only two innings and taking the loss. Twenty-two-year-old rookie right-hander Lance McCullers Jr. got the start for the Astros. McCullers, who was called up from Corpus Christi of the Double-A Texas League in May, was 6-7 with a 3.22 ERA. He was making his first postseason appearance.

With an afternoon high of 90 degrees, the roof of Minute Maid Park was closed when McCullers threw the first pitch at 12:07 P.M. in front of a sellout crowd of 42,387 roaring fans. Six pitches later, Royals shortstop Alcides Escobar was hit by a pitch and became the afternoon’s first baserunner. McCullers quickly settled down and retired the next three hitters to end the top of the first. Similarly, Ventura hit Carlos Correa in the bottom of the first to give the Astros their first baserunner. After a single to right by Colby Rasmus, Ventura got Evan Gattis swinging to end a relatively uneventful first inning.

The Royals opened the scoring in the top of the second when Mike Moustakas drew a one-out walk and catcher Salvador Perez hit a two-run homer to right-center. The Astros quickly responded in their half of the second when center fielder Carlos Gomez led off with a homer into the Crawford Boxes1 in left, cutting the Royals’ lead to 2-1. Correa tied the game in bottom of the third when he launched a two-out, line-drive homer to left-center.

The game stayed tied, 2-2, until the Astros touched Ventura for another run in the bottom of the fifth. Right fielder George Springer drew a two-out walk and scored when Correa sent a slicing line drive down the right-field line that ricocheted off the stands for a double and his second RBI of the game.

McCullers responded with a shutdown inning in the top of the sixth. After retiring the Royals in order, McCullers rolled his shoulder and slapped two fingers across his neck. Some in the Royals dugout interpreted this as a throat-slashing gesture, a requiem for Kansas City’s season. After the game the Royals’ Edinson Volquez responded to McCullers’ gesture with a simple reminder, “C’mon, man. You’ve got to get 27 outs. Not 17.”2

The Astros added three in the top of the seventh. Right-hander Kelvin Herrera, who replaced Ventura in the sixth, issued a leadoff walk to Jose Altuve, and Royals manager Ned Yost summoned right-hander Ryan Madson from the bullpen. Madson struck out Springer for the inning’s first out. Correa then hit his second home run of the game, a two-run bomb into the stands in left field. Before the buzz from Correa’s blast had dissipated, Rasmus launched a solo shot that landed just inside the right-field foul pole. After back-to-back singles to Gattis and Gomez that put runners on second and third with one out, Madson managed to disentangle himself from further damage by getting Luis Valbuena on a fly to left and striking out Marwin Gonzalez. When the dust had settled, the Astros had a 6-2 lead and the Royals appeared all but beaten and eliminated.

Astros right-hander Will Harris, who came on relief of McCullers and recorded the final two outs of the seventh inning, started the bottom of the eighth. The Royals wasted no time mounting a comeback. Alex Rios singled to left, Escobar singled to center, and Ben Zobrist singled to center to load the bases. Lorenzo Cain hit a groundball single to left to plate Rios, prompting Astros manager A.J. Hinch to summon left-hander Tony Sipp from the bullpen. Eric Hosmer greeted Sipp with a line single to right, scoring Escobar and cutting the Astros’ lead to 6-4. With the bases still loaded, Kendrys Morales sent a groundball up the middle that deflected off Sipp’s glove and bounded over the glove of Correa at short. Zobrist and Cain scored and Hosmer went to third.4 Jarrod Dyson ran for Morales and stole second before Sipp struck out Moustakas. Hinch again went to his bullpen and called on right-hander Luke Gregerson to face right-handed-hitting Drew Butera. Gregerson walked the Royals catcher to reload the bases. With the infield drawn in, left fielder Alex Gordon hit a groundball to second. Altuve made a diving stop to rob Gordon of a hit. As the Astros’ second baseman completed the play, Hosmer crossed the plate with the go-ahead run. After walking Rios to load the bases again, Gregerson struck out Escobar to end the inning with the Royals leading 7-6. The season-defining workingman’s rally featured five singles, an error, and a go-ahead groundout.5

With momentum in their favor, the Royals called on right-handed reliever Wade Davis for a six-out save. Davis, who was 8-1 with 17 saves and a microscopic 0.94 ERA, assumed the closer’s role late in the season when Greg Holland suffered a partially torn elbow ligament.6 Davis made short work of the Astros in the bottom of the eighth, retiring the side on seven pitches.

The Royals added a couple of insurance runs in the top of the ninth. Zobrist drew a leadoff walk and after Cain struck out swinging, Hosmer deposited a two-run homer into the seats in right-center to increase the Royals’ advantage to 9-6.

Davis returned to the mound in the bottom of the ninth to close out Game Four. After yielding a leadoff single to Correa, the shortstop’s fourth hit of the afternoon, Davis retired Rasmus and pinch-hitter Preston Tucker on called third strikes, then got Gomez on a fly ball to right to end the game. After 4 hours and 5 minutes and an improbable Royals comeback, the series was headed back to Kansas City for a decisive Game Five.

Royals manager Yost summed up the comeback in an almost disbelieving manner. “That kind of came out of nowhere, huh?” Shaking his head and still trying to process the result, Yost completed his thought, “Sometimes there’s things that are meant to be.”7

Indeed, things were meant to be. The Royals would go on to capture Game Five, 7-2, on the strength of an efficient outing by starter Johnny Cueto, solid relief from Davis, and a lineup that battled during every at-bat. The Royals went on to dispatch the Toronto Blue Jays in six games in the ALCS and defeated the New York Mets in five games to win the World Series. Only one World Series champion came closer to brink of elimination than the 2015 Royals.8 In 1986 the New York Mets were down to a 1 percent win probability when they rallied in the bottom of the 10th inning of Game Six of the World Series and eventually captured the title in seven games. Like the Mets, the Royals were a team of destiny.

1 The Crawford Boxes are so-called because they run parallel to Crawford Street, outside the ballpark.

2 Andy McCullough, “A Royal Miracle: Eighth-Inning Rally Gets KC Past Astros 9-6,” Kansas City Star, October 13, 2015, kansas.com/sports/mlb/kansas-city-royals/article38855619.html. McCullers actually retired 19 batters before being lifted for Will Harris in the top of the seventh inning.

3 Joe Posnanski, “The Walking Dead: The Royals Were All but Beaten and Eliminated Monday, Until They Weren’t,” https://sportsworld.nbcsports.com/the-walking-dead/.

4 Despite not touching the ball, Correa was charged with an error.

8 The Royals actually had a 1.6 percent win probability after the Astros went ahead by four runs and put runners on second and third with one out in the bottom of the seventh.