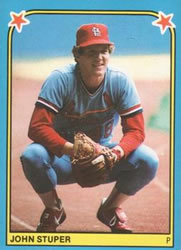 Described as a “dazzling performance,” by sportswriter Joseph Durso, St. Louis Cardinals rookie John Stuper overcame two rain delays to toss a complete-game four-hitter, beat the Milwaukee Brewers, 13-1, and force Game Seven of the World Series.1 “For him to pitch nine innings was one of the most impressive performances I’ve ever see under the circumstances,” quipped veteran Jim Kaat about his teammate.2 “Considering the circumstances and the importance of it,” admitted the hurler himself, “this is the best game of my life.”3

After losing the last two games to the Brewers on the road, skipper Whitey Herzog’s Redbirds returned to the Gateway City in a do-or-die situation. He called on Stuper for another youth-vs.-age matchup against 258-game winner Don Sutton and a rematch of Game Two starters. The Cardinals won that game, 5-4, though neither hurler looked good with Stuper yielding four runs in four innings and Sutton the same in six frames. Acquired in 1979 in a trade with the Pittsburgh Pirates, Stuper had been a long-shot project. “When we got him, he was a strong well-conditioned kid but was throwing down from the side,” said pitching coach Hub Kittle. “Gradually we changed his mechanics, and when he came over the top, the ball began to jump.”4 Stuper moved through the Cardinals farm system, struggled in his first taste of Triple-A ball in 1981, posting a 6-14 record and 4.92 ERA with the Springfield (Illinois) Cardinals. A 7-1 slate, including five complete games in eight starts, and a 1.46 ERA with Louisville in 1982 earned the 25-year-old western Pennsylvanian a promotion to the big stage in late May. He proved his mettle, going 9-7 (with a robust 3.36 ERA) and logging 136⅔ innings. Sutton, a trading-deadline acquisition from the Houston Astros, gave manager Harvey Kuenn’s Brew Crew a psychological boost for the September stretch run and bolstered the staff, winning four times, including the AL East Division Series winner in the last game of the season.

Busch Stadium was packed with 53,723 fervent, red-clad Cardinals fans on a Thursday night, despite persistent dark skies and an ominous weather forecast including a tornado alert. Temperatures dropped more than 20 degrees, into the 40s, during the contest.

After both hurlers breezed through the first, Stuper looked shaky in the second. He surrendered a leadoff walk, then a single, but an inning-ending double play ended the threat. “During the first two innings,” said Stuper, “I was more nervous than I’ve ever been in my entire life.”5 Another leadoff single and inning-ending twin killing defined the third, then Stuper went on a tear. “I was throwing strikes and getting ahead of batters,” he said. “That’s the name of the game.”6 With an array of fastballs, curves, and sliders, he held the Brewers hitless in the fourth through eighth innings and endured 2 hours and 39 minutes of rain delays while the Cardinals clubbed the Brewers into submission.

The thunder and lightning provided by Mother Nature to begin the second was duplicated by the Redbirds bats. Dane Iorg basted a double deep left field that caromed off Ben Oglivie’s glove with two outs. Then “the impossible happened,” lamented sportswriter Tom Flaherty of the Milwaukee Sentinel.7 Shortstop Robin Yount let Willie McGee’s routine grounder roll between his legs and Iorg scored. Tom Herr followed with a double off the right-field wall; Charlie Moore rifled a strike to catcher Ted Simmons, who should have erased a sliding McGee, but “tried to make the tag before he had the ball,” noted the Sentinel’s Vic Feuerherd.8 “We got a little disoriented with the errors early on,” said Simmons.9 The Brewers committed four errors in the game, two each by the “surest hands” on the team, noted Flaherty, Yount and second baseman Jim Gantner.10

After Lonnie Smith was thrown out trying to steal home on a bang-bang play to end the third (television replays suggested he was safe and Feuerherd opined that home-plate umpire Jim Evans missed the call),11 the Cardinals tacked on three in the fourth. George Hendrick led off with a single and moved up a station on Sutton’s balk. Herzog complained about Sutton’s hesitation in his windup in Game Two and claimed, “He’s been balking for years and getting away with it.”12 Darrell Porter made it 4-0 by walloping a round-tripper to deep right field. It was the first Redbird home run in the postseason by someone other than McGee (who had three); the Cardinals hit a big-league low 67 homers in the regular season, but did their best impression of Harvey’s Wallbangers, the Brewers moniker owing to their major-league-high 216 homers. Iorg followed with a triple and scored the fifth run on Herr’s perfectly placed squeeze bunt to the pitcher.

A misty downpour began as the Cardinals came to bat in the fifth. Lonnie Smith, who had injured the ring finger on his left hand in his attempted steal of home, led off with a single, and scored on Keith Hernandez’s home run, his first in 32 games, to give the Cardinals a 7-0 lead and send Sutton to the showers. “I had good stuff,” said the 17-year veteran, who eventually won 324 games, “but bad location.”13 Jim Slaton retired the only two batters he faced, sandwiched around a 26-minute rain delay.

The sixth was one of the longest innings in postseason history. Iorg led off with a double14 off reliever Doc Medich, acquired from the Texas Rangers in August. Medich, a 10-year veteran, who had won 124 games, was forced to take one for the team, and it was brutal. He uncorked a wild pitch, then McGee’s single plated Iorg. Torrential rains interrupted the game for 2 hours and 13 minutes. Once the cold front passed through and the temperature plummeted, the grounds crew frantically dried the turf, aided by a fleet of Zambonis. The real-life orthopedic surgeon Medich went back to the mound, and by the time the inning was over, he had yielded five hits and six runs (four earned), five hits, walked one, and tossed two wild pitches in what proved to be the last outing of his career. Hernandez laced a bases-loaded two-out single to drive in two runs, Hendrick followed with an RBI single, and another scored when Gantner muffed Porter’s grounder.

Stuper kept loose during the second rain delay, unsure how long it would last. Trainer Gene Gieselmann applied heat packs to his right arm and eventually gave him at least three rubdowns. As Stuper began to warm up to take the mound for the first time in more than 2½ hours, Herzog also sent 43-year-old Kaat, who had made 62 appearances, to join him in the pen. According to Redbirds beat writer Rick Hummel of the St. Louis Post-Dispatch, Herzog claimed he would not have sent Stuper back out to finish the game after the second delay; however, the right-hander was working on a shutout and “has all winter to sleep,” quipped the old-school pilot.15

Admittedly “pumped up,” Stuper breezed through the seventh and eighth.16 The only blip was third baseman Ken Oberkfell’s throwing error on Gorman Thomas’s single in the eighth. “I wasn’t throwing with great velocity but my ball was moving well,” offered Stuper.17

After scoreless frames by Medich and Dwight Bernard, Stuper faced the Brewers in the ninth as the clock struck midnight and the game rolled over into Friday morning. He yielded his first hits in 5⅔ innings when Gantner and Paul Molitor led off with a double and single, respectively, and then a wild pitch scored Gantner. Stuper worked around a two-out walk to Ned Yost, and the ended the game at 12:21 A.M., exactly five hours after it had started, (though only 2 hours and 21 minutes officially) by retiring Oglivie on a fly ball to center, forcing a dramatic Game Seven.

“I made some good pitches tonight,” said Stuper, who became the first Cardinals pitcher to toss a complete game in a World Series since Bob Gibson lost to Mickey Lolich, 4-1, in Game Seven of the 1968 fall classic. “The way I’ve been pitching all year is hard stuff – down – and hoping they hit it on the ground.”18 He finished with a four-hitter, struck out two and walked two, and threw 104 pitches, 66 of which were strikes.

Stupor’s inspiring performance led to the winner-take-all game the next day. The Cardinals overcame a 3-1 deficit in the sixth by scoring five unanswered runs to capture their first title since 1967.