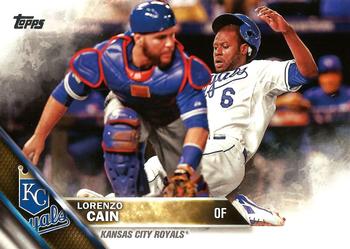 On a tense autumn evening at Kauffman Stadium, the Kansas City Royals won their second consecutive pennant by defeating the Toronto Blue Jays, 4-3. Exactly 30 years earlier, the Royals found themselves down 3-1 against the St. Louis Cardinals in the 1985 World Series after a Game Four defeat. But on this October night, after a 45-minute rain delay, the Royals became back-to-back American League champions.

After Toronto’s 7-1 Game Five victory, Ned Yost and the Royals turned to 24-year-old Yordano Ventura, no stranger to October’s bright lights. Ventura, in Game Six of the 2014 World Series, pitched seven scoreless innings to force a deciding game. Now, 360 days later, Ventura allowed a leadoff double to Ben Revere, but then settled in and retired the next 10 Blue Jays.

While Ventura looked to continue his postseason success, Blue Jays lefty David Price hoped to avenge his 0-7 record as a starter in the playoffs. (His two postseason wins had come as a reliever, one for Tampa Bay and one for the Blue Jays.) He had a 5.24 ERA in 56⅔ postseason innings.1 The 2012 Cy Young Award winner had thrown 96 pitches in Game Two, allowing five earned runs and striking out eight Royals in 6⅔ innings.

After Ben Zobrist smacked a home run off of Price’s cut fastball in the first inning, Mike Moustakas came up with one out in the second. Moustakas was batting .132 in the postseason but had hit lefties well in 2015, posting a .823 OPS. Off Price he crushed a changeup that was snatched off the top of the right-center-field wall by Caleb Humphreys, a 19-year-old from Blue Springs, Missouri. “I saw it coming right at me,” he said. “This is Game 6 of the (ALCS), I played my baseball my whole life, I had a great time playing baseball, and for it to actually happen, and to get a home run ball. …”2 The drive was ruled a home run, but the umpire crew gathered to review the call. One couldn’t help but remember the Jeffrey Maier escapade in the 1996 American League Championship Series. Asked by a writer if he knew the name Jeffrey Maier, Humphrey said he did not. “When the story was brought up, he interrupted. ‘Oh yeah!’ he said. ‘Yeah, yeah, yeah.’”3

The Royals’ early power surge in Game Six was deceiving. These 2015 Royals excelled at the little things, stealing bases and having excellent defenders while finishing next to last in the American League in home runs (139). By contrast, the Blue Jays relied on power, leading the major leagues in home runs and featuring three especially powerful hitters in Jose Bautista, Edwin Encarnacion, and Josh Donaldson. They led the major leagues in home run/fly ball rate, with 11.6 percent of their fly balls becoming home runs. The Jays tied for the league lead in walk rate at 9.2 percent, while the Royals were last with 6.3 percent.

Jose Bautista had not endeared himself too kindly to fans in Kansas City after pretending to toss the ball that made the final out of an inning into the stands in Game One. That incident, combined with the dust-ups the Royals and Jays had in their August series, and there was no surprise when Bautista faced thousands of boos after scorching a home run off Ventura in the bottom of the fourth. This was the first time Ventura ran into trouble, and the trouble continued when he walked Russell Martin and Kevin Pillar to begin the fifth inning. Further damage was averted when with two outs and Martin and Pillar still on first and second, Mike Moustakas dove to catch a 114-mph liner off the bat of Josh Donaldson. This was the third-hardest batted ball of the 2015 postseason, according to Statcast.4

After Ventura allowed a double to Edwin Encarnacion with one out in the sixth inning, Kelvin Herrera relieved him. A 2015 All-Star, Herrera induced three flyouts and struck out two Blue Jays in 1⅔ perfect innings. David Price went into his seventh inning facing a 2-1 deficit, and allowed a single to Mike Moustakas. After getting two outs, Price was removed in favor of Aaron Sanchez. Royals right fielder Alex Rios singled sharply to left field, scoring Moustakas. Kansas City took a 3-1 lead into the eighth inning.

The Royals had an embarrassment of riches in their bullpen during their run of postseason success. The “HDH” trio of Kelvin Herrera, Wade Davis, and Greg Holland that was so dominant during the previous pennant run had now been slightly modified with Holland’s UCL injury. Ryan Madson, an effective free-agent signing with a 2.13 regular-season ERA, came to the mound in the eighth inning instead of Davis. That move would backfire. Bautista cranked a home run down the left-field line, tying the game at 3-3, and Madson walked Encarnacion. Wade Davis replaced Madson and retired the side. At that point a rain shower halted the game. Davis had once been the secondary piece to the James Shields trade, a reclamation project for the Royals, but now he was the best closer in the American League, armed with a devastating arsenal of pitches and a 0.94 ERA in 2015.

During the 45-minute rain delay, Davis did not throw off a mound, instead riding a stationary bike and keeping his arm loose with a heating pad.5 Greg Holland, Davis’s injured bullpen mate, approached Yost and told him, “Wade wants to go to the World Series. He’s going to be fine.”6

The Royals had to score a run to fulfill the wish of Davis and Kansas City. Lorenzo Cain walked to lead off the eighth inning. Eric Hosmer laced a 2-and-2 breaking ball from Sanchez down the right-field line, and Cain was off and running. Jose Bautista cut the ball off, stopping Hosmer at first base, but Cain kept on running, accelerating around third base and scoring the go-ahead run. Third-base coach Mike Jirschele had done his homework, participating in a similar situation in an earlier game of the series, just with a slower runner in Kendrys Morales.7 “I knew if I had speed coming in there, I’d have that opportunity and it came at the right time,” Jirschele said.8 He sure had speed coming in. Cain advanced from first to home in 10.5 seconds, reaching a top speed of 20.7 miles per hour, according to MLBAM guru Mike Petriello, who also tweeted, “Lorenzo Cain had two of the top seven first-to-home times of the season, per Statcast.”9 Cain and the Royals were keen on the fundamentals of baserunning, and it came to fruition at the most pivotal of points.

The inning ended quickly when Moustakas flied out and Morales grounded into a double play. In the top of the ninth Davis ran into trouble. It had been over an hour since he had been out on the mound. Russell Martin singled. Dalton Pompey ran for him and stole second and third. With no outs, the Royals closer walked Kevin Pillar. Davis recovered to strike out Dioner Navarro, pinch-hitting for Ryan Goins. But Pillar stole second base on the strikeout pitch to Navarro. Davis fell behind 2-and-0 on Ben Revere. Revere had made an incredible catch in the seventh inning, leaping to snag a Salvador Perez extra-base-hit off the left-field wall. However, Davis fought back to strike out Revere. Fox’s cameras caught Revere hitting a trash can with his bat in the dugout after his K.

Josh Donaldson, a few weeks away from being named the American League MVP, stepped up to face Davis with men on second and third and two outs. After a hard-fought battle, Donaldson grounded out to Mike Moustakas. He fired to Eric Hosmer, who with his game-winning single had tied George Brett for first in Royals postseason RBIs. The Royals had won the pennant for the fourth time in franchise history. It’s fitting that for the second straight year, the final out to win the pennant was 5-3, Mike Moustakas to Eric Hosmer. These two players were general manager Dayton Moore’s first two first-round selections in the major-league draft (Moore took over as GM right before the 2006 draft, but the outgoing group made that draft’s selections). And it was the Zack Greinke trade that brought back the Game Six hero Lorenzo Cain, as well as ALCS MVP Alcides Escobar.

This win propelled the Royals to take on the New York Mets in the 2015 World Series, the 111th rendition of the fall classic. Showing resolve, using their trademark speed, and receiving heroic performances from Lorenzo Cain, Mike Jirschele, and Wade Davis brought Kansas City another pennant-winner after decades of not even getting close. After falling short in Game Seven against the San Francisco Giants in 2014, they became the third back-to-back AL pennant winners since 2000.

The author consulted Baseball-Reference.com for the game’s box score and other details such as splits and play-by-play information, as well as Retrosheet. Watching the Fox broadcast on YouTube was also helpful in writing this article.