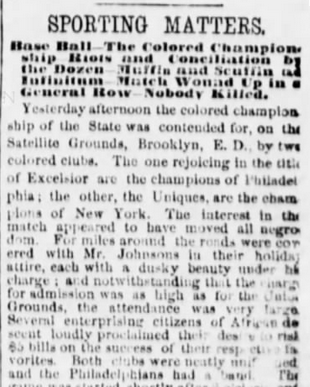 “Championship” is often a fluid concept when applied to 19th-century contests. But no match had that title attached to it as arbitrarily as the game that took place on the Satellite Grounds of Brooklyn on October 3, 1867. As a matter of fact, the term by which experts categorize the game today, “The First Colored Championship” really tells only a fraction of the story.

One-third of it, to be exact. When the Excelsiors, a fine black base ball team from Philadelphia arrived in New York that Thursday morning, they were warmly received by what the New York Herald characterized as “… a delegation of gentleman of the colored persuasion…” Following a fife-and-drum-led parade and various “sumptuous” entertainments, the team was escorted over to Brooklyn to face the Uniques, a black team representing the Williamsburg section of the borough.

The match, believed to be the first ever played between black clubs in an enclosed grounds, boasted the largest crowd seen at the field that season, according to the Brooklyn Daily Union, with half of the spectators white males. Also in attendance, the Union reported, were “… a large number of the gentle demoiselles of darkydom…(who) …by their expressive and readily distinguishable smiles, cheered the dusky heroes in their noble endeavors.”

The Excelsiors, by all accounts, were the superior team, some observers going so far as to put them on a par with the best of the white Philadelphia clubs. The home-standing Uniques, meanwhile, were described by the Tribune as “second-rate opponents.”

Once the contest got underway, attention focused on the umpire, Mr. Patterson, a black arbiter from the Bachelor Club of Albany. Disputes over his decisions were frequent and led both clubs to engage in various histrionics. In the next morning’s Herald, a reporter indentified as Kelly described this plea from the captain of one of the squads following a call that seemed particularly unfair to his side: “Put on yer coats, put on yer coats, das all”, he was said to have yelled. Kelly found the game: “… rendered remarkably lively by such interludes…”

Participants included an unidentified Brooklyn pitcher who, according to Kelly, “jerked the ball most palpably…” (Was he perhaps throwing an early version of a curve?) When taken to task over his unorthodox delivery, Kelly reported that the hurler “struck a position and exclaimed, ‘jis dry up; you fellers pitch jis the same…’”

The contest continued through seven innings until the Philadelphia team claimed it was too dark to see the ball. As the visitors were leading 42–37 at the time, this naturally led to another disagreement.[fn]The New York Tribune saw the end of the game differently, reporting the final score as 37-24 after six innings, the runs scored in the seventh not counting due to the game being called. Since other sources have included a box score showing the score as 42-37, however, the Tribune’s reporter must have assumed that the game was “officially called” after six.[/fn] No “colored darky is a gwine to take deat yere ball out o’ Wimsburg,” Kelly characterized one Brooklynite as declaring. But, he added, they were finally persuaded to admit defeat, “and the game terminated in most delicious confusion.” The Brooklyn Daily Union, however, was not so easily amused. “The contest was in no respect credible to the organizations,” it contended.

The Excelsiors and their contingent ferried their way back to New York in triumph, scheduled to return the next day to take on a second black Brooklyn team known as the Monitor. The next morning’s Times hyped this event, but included a warning: “It is to be hoped that the scenes that characterized the first game for the ‘Colored Championship of the United States’ will not be repeated. Act like men, and set an example to the ‘white trash,’” they chided.

But the game did not take place as scheduled.

Newspaper accounts of Saturday, the 5th, report that the Philadelphia team never arrived, with the Times speculating on a possible cause: “The … manner in which their game with the Unique club was played … doubtless deterred them from visiting the ’Burgh yesterday.”

On October 25, however, a game was played on the Satellite Grounds, pitting the Uniques against the Monitor. This match-up seemed a perfect contest between natural rivals, but according to a couple of sources, it might have been more than that, with the Tribune trumpeting this game as actually being the third match of a “round-robin”: “The Monitors are the gentlemen who, on the return of the Philadelphians from their Albany trip avenged their brethren (the Uniques) by a handsome victory.” The New York Herald agreed, stating that since the Philadelphia club had beaten the Uniques on October 3 and the Monitor had defeated Philadelphia in a follow-up contest, this game would be for the true “colored championship.”

But though box scores and game stories exist for the other two contests, no post-game reports can be found of the Philadelphia-Monitor meeting. For whatever reason, the papers that covered the other two games ignored this “middle” contest, so we can only look at the subsequent Uniques-Monitor match for what it was: the first recorded meeting between the two most prominent black base ball clubs in Brooklyn.

According to the Daily Times, this game was “credible at first” with the Monitor holding a 7–6 lead after 4½ innings, but due to some “very bad muffing” on the part of the Uniques, the Monitor piled up 42 runs over their final four at-bats, winning 49–17.

Did this win solidify the Monitor as the “Colored Champions of the United States”? Or was the best black team still the Excelsior club of Philadelphia? Like the term “Championship,” the hazy history of early baseball is not so easily codified. It would not be until the formation of Professional Negro Leagues decades later, that true Colored Champions could be officially crowned.

Excelsiors of Philadelphia 42
Uniques of Brooklyn 37