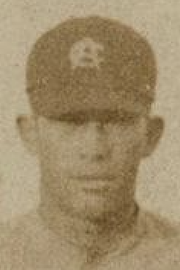 Red Grier wouldn’t have had the chance to pitch one of the most famous games in Negro leagues history in 1926 if he hadn’t hurled so poorly the day before. Grier was the choice to start the second game of the Negro World Series for his Atlantic City Bacharach Giants, the Eastern Colored League champions, on October 2. But, as the team’s hometown Atlantic City Daily Press put it, Red “was not up to his usual form,”1 which was an understatement – the Chicago American Giants of the Negro National League chased him with a seven-run second inning and hung on for a 7-6 win.

The Game Two assignment from Bacharachs manager Dick Lundy befitted Grier’s status as one of the team’s two best starters, with a 16-8 record against ECL and other top-level teams.2 So, since Grier hadn’t had too much of a workout the day before (at least not by the standards of the average Negro league team, where two or three starters ate up a majority of innings), Lundy sent him out again on the 3rd. All tuned up, Grier cruised through nine hitless innings, striking out eight American Giants while giving up six walks. The hot-hitting Bacharachs had 14 hits as Grier, a .266 hitter that season, had three of his own, plus a walk. Atlantic City won 10-0. His masterpiece was the first no-hitter in the black World Series, and one of only two ever tossed in that Negro league showcase.

Although neither Series team was from Baltimore, a Negro World Series contest in a neutral place such as Maryland Park, the ECL Baltimore Black Sox home field, wasn’t unusual. The Negro leagues’ primary fan base, African Americans in urban areas of the East and Midwest, was a population with less-than-average income and limited discretional spending. It was good for the business of black baseball to move games around, appealing to fans outside the areas from which the Series combatants came. Only eight of the 11 games (the best-five-of-nine format also included two ties), were played in Atlantic City and Chicago. In addition to this game in Baltimore, the series also moved to Philadelphia for a pair of contests at the white major-league Phillies’ Baker Bowl.

The Bacharach Giants were charter members of the ECL in 1923 and fielded middling to good teams most years. A chronic lack of first-rate pitching began to be solved in 1925 by the acquisition of Chauncey “Rats” Henderson from the nonleague Richmond Giants, and Grier, whose first name was Claude, from the Wilmington Potomacs when that ECL team folded in midseason. This helped Atlantic City to its first pennant in 1926. Henderson was considered the ace of the Bacharach staff and started the first World Series game. That brought on Grier for the second contest and, as it turned out, the famous third one.

In the top of the first inning Grier briefly looked as if he might still be shaky from the day before. He walked the leadoff hitter, right fielder Jelly Gardner. Gardner stole second as the next batter, left fielder Sandy Thompson, struck out, and commenced to third when first baseman Jim Brown grounded out. Gardner would have scored and the no-hitter would have vanished in the first had not Bacharach shortstop Lundy “raced back” to grab a popup by catcher John Hines that was falling into short left field.3

Red had clearly settled down – the second and third innings were six men up and six down, two on strikeouts, with nothing hit out of the infield. The only thing close to a base hit was an infield roller in the third by Chicago pitcher Webster McDonald on which first baseman Chance Cummings “made a fine play.”4 Grier walked two more in the fourth, although one of them, Thompson, tried to steal second and was thrown out by catcher Willie Jones on a strikeout/throw-out double play.

Then in the fifth, the American Giants loaded the bases on two walks and an error by Cummings. But a pair of force outs at second had been interspersed, and when Thompson hit an infield grounder, Grier pounced on it and threw him out. The sixth was less dramatic. According to the Daily Press, second baseman Chano Garcia “made a swell stop” of a grounder for out number one. After Hines struck out, center fielder George Sweatt “looked wistfully at the third strike being called and went to the dugout.”5

Grier was pretty much on cruise control in the seventh and eighth, with only one baserunner in each inning, on an error and a walk, neither advancing past first. Many no-hitters have at least one late-game at-bat where the gem could be spoiled but for an outstanding fielding play. This happened with one out in the top of the ninth. Lundy, Cummings, and Garcia had gotten credit for good plays earlier in the game, but the Daily Press reporter specifically noted that third baseman Oliver Marcelle “saved Grier of a hit” on a grounder by his counterpart, Dave Malarcher. Then Chicago shortstop Stanford Jackson hit a bouncer to Garcia, and the no-hitter was in the books.6

Other than having been generous with bases on balls, Grier pitched a great game, even for a no-hitter. Only three balls were hit out of the infield, including the Texas Leaguer that Lundy snared in the first inning.

Grier’s gem tied the series at one win each (the opening game had been a 3-3 tie, called after nine innings because of darkness). After five games the Bacharach Giants were up two games to one, with another nine-inning tied game called off as the sun began to set in Philadelphia. On October 6 Grier was back on the mound with a luxurious (by Negro league standards) three days of rest, and he was sharp again, limiting the American Giants to six hits and three walks in a complete-game 6-4 win.

By the time eight games had been played the Bacharachs were on the verge of taking the Series, with four wins to Chicago’s two. But with Grier again on the mound on Monday, October 11, the American Giants won the ninth game, 6-3. Grier threw another complete game and didn’t pitch terribly – he gave up only seven hits and struck out nine – but he again walked six batters and hit one. Two of the American Giants who had gotten free passes scored, as did the hit batsman. Things only got worse for the Bacharachs, who had been limited to three runs in each of their last two games and then were shut out in the last two Series contests, giving Chicago the crown.

The 1926 Series, understandably, was the highlight of Grier’s career. But his descent from that peak was swift. He wasn’t able to pitch in 1927 until late in the season because of a sore arm, and his major-league career was about finished. The Bacharachs cut him loose, and he caught on in Baltimore with the Black Sox in 1928. But he seems to have gotten into only one game, a start on July 1 in which he was pulled after the first inning. The local black paper reported that “Red Grier is still off form, probably it’s the old arm, so Manager Taylor sent him to warm the bench in the second inning.”7

James A. Riley, who interviewed scores of Negro leaguers and used their evaluations of their peers in his Biographical Encyclopedia of the Negro Leagues, hit on a likely underlying reason for Grier’s plummet: “an unwillingness to adhere to proper training procedures. … [H]ad he taken good care of himself, he would have had a long career and he could have been one of the best left-handers of all time.”8

Grier eventually returned to his hometown of Newton, North Carolina, where he found work as a mill worker and an estate caretaker. He died in the hospital there on March 1, 1967, of arteriosclerosis and heart congestion, just three weeks shy of his 63rd birthday.9

Grier’s absence from the Bacharachs’ rotation in 1927 was partially countered by promoting former part-time hurler Luther “Red” Farrell to be a regular starter. Farrell, a left-handed pitcher and batter, was a powerful hitter who had spent most of his time in the Negro leagues as an outfielder. But he split his appearances in 1927 between the garden and the mound, where he led the team in wins with 16 against league and other top-flight competition.10 Farrell took Grier’s place in one other way, too. When the Bacharachs repeated as ECL champions he too threw a Negro World Series no-hitter, again against Chicago, on October 8 in Atlantic City. Farrell’s game wasn’t as outstanding as Grier’s – the American Giants scored two runs on walks and errors, and rain stopped the contest after seven innings. It was still a 3-2 World Series victory, even though, as in the year before, Atlantic City lost the Series to Chicago.

2 James E. Overmyer, Black Ball and the Boardwalk (Jefferson, North Carolina: McFarland, 2014), 255. None of the Negro leagues kept complete and accurate player statistics, but current research has reconstructed the statistics to a remarkable extent, using historical newspaper searches for box scores. There is no completely agreed upon set of numbers available. The statistics for the Bacharach Giants cited here include most of the team’s games against league and other high-level competition. For another thoroughly compiled version, see the Negro Leagues Database at Seamheads.com, which has statistics for most Negro League seasons.