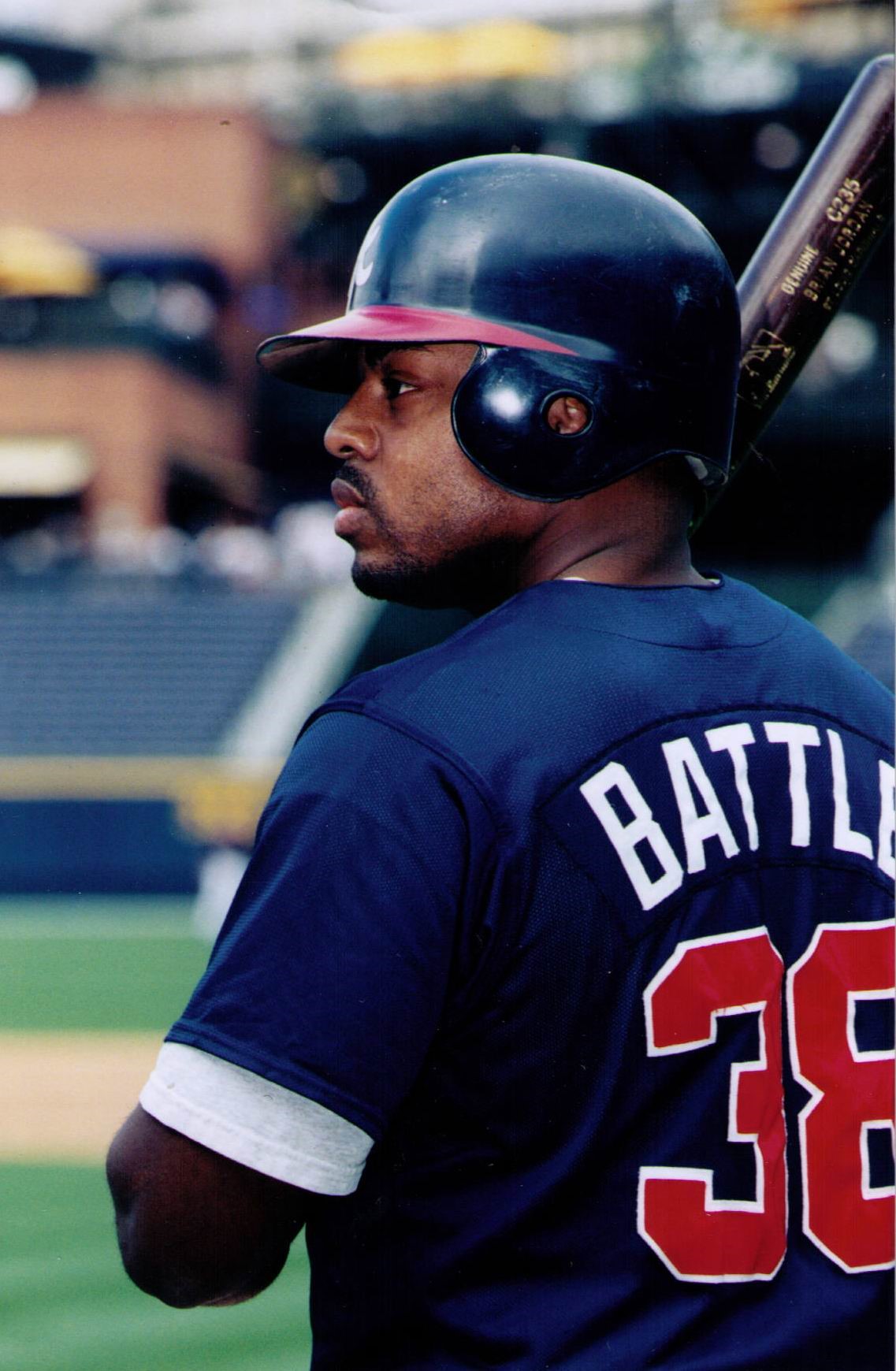 The Atlanta Braves recorded a major-league-best 925 victories during the 1990s, none so convincingly as their final regular-season game of the decade.

The World Series-bound Braves pummeled the hapless Florida Marlins, 18-0, at Turner Field in Atlanta on October 3, 1999, rapping out 21 hits by 15 different players.1 The game tied a 114-year-old team record for the biggest shutout win, and remains the second-largest margin of victory in club history.

And the Braves did it all without eventual National League MVP Chipper Jones and All-Star Brian Jordan, who combined for 68 home runs and 225 runs batted in 1999. Jones and Jordan took the day off, ostensibly to rest up for the postseason.

Marlins manager John Boles put it succinctly when he told the South Florida Sun Sentinel: “Sometimes you eat the bear, and sometimes the bear eats you. This – this was the whole zoo.”2

Atlanta entered the day at 102-59, having long since clinched the National League East Division ahead of the wild-card New York Mets. Florida resided in last place at 64-97, the NL’s poorest record.3

The Braves sent two-time Cy Young Award winner Tom Glavine to the mound for the regular-season finale against Dennis Springer, a knuckleballer pitching for his fourth team in five years. Glavine was 13-11 with an uncharacteristically bloated 4.21 ERA heading into the game, while Springer was 6-15 with a 4.59 ERA – though he’d pitched a 2-0 shutout against Atlanta on July 21.

Aside from Jones and Jordan, Atlanta manager Bobby Cox penciled in much of his regular lineup, including first baseman Ryan Klesko, center fielder Andruw Jones, and second baseman Bret Boone. Otis Nixon, playing his last major-league season at age 40, was in left field, batting second behind Gerald Williams, who shifted from left field to right in place of Jordan. Ozzie Guillen, who split time with Walt Weiss at shortstop during the season, subbed for Chipper Jones at third base and batted sixth behind Boone and Klesko.

Florida started what was mostly its regular lineup for the season finale except for Ramon Castro, was catching in place of Mike Redmond. That was a curious decision by Boles; Redmond was 9-for-12 vs. Glavine to that point.4

Glavine allowed a pair of singles in the top of the first, but got a pair of groundouts to keep the Marlins scoreless. Springer served up a leadoff double to Williams but retired the next three Braves to leave it 0-0 after one.

Glavine struck out Mike Lowell, Derrek Lee, and Castro in succession in the second. Thus inspired, the Braves picked up two runs in the bottom of the inning, with Andruw Jones and Guillen starting things off with back-to-back doubles for a 1-0 lead. After Eddie Perez grounded out and Weiss walked, Glavine delivered a groundball single to left to make it 2-0.

Glavine again got the Marlins 1-2-3 in the third, before the Atlanta offense erupted. Boone doubled to start the inning and Klesko singled him home for a 3-0 lead. After a walk to left fielder Brian Hunter – who’d subbed in for Andruw Jones in the top of the inning, with Nixon moving to center – and a groundout by Guillen, Perez’s double scored both runners for a 5-0 Braves advantage.

Weiss singled Perez to third, and that was all for Springer, who was removed in favor of Reid Cornelius. Glavine rolled his second single of the game into left field to score Perez and make it 6-0. Weiss took third on the play when Cliff Floyd mishandled the ball in left.

Williams then doubled – the Braves’ third two-bagger of the inning – to score Weiss and put Atlanta on top 7-0. Nixon lined out for the second out, but Keith Lockhart, pinch-hitting for Bret Boone, singled home Glavine and Williams to give Atlanta a 9-0 advantage.

Atlanta continued to empty the bench after Klesko grounded out to end the inning. Lockhart stayed in at second, while Howard Battle took over at third and George Lombard replaced Williams in right.

Glavine allowed a leadoff single to Floyd in the fourth, but got Preston Wilson to ground into a double play. Mark Kotsay singled, but Lowell flew out and the Marlins remained scoreless.

Cornelius retired the Braves in order in the fourth, and Glavine worked around a one-out single in the fifth. He struck out Dave Berg swinging to end the inning in what would be the final batter he faced, finishing his day with five hits allowed but no walks and six strikeouts in five innings (in addition to his two singles and two RBIs).

Marlins reliever Michael Tejera worked a perfect fifth, including a strikeout of José Hernandez, who was pinch-hitting for Glavine. The Braves’ first man out of the bullpen was right-hander Russ Springer – no relation to Dennis – who set the Marlins down in order with a pair of strikeouts in the sixth.

Tejera stayed in for Florida in the bottom of the inning, and allowed a single to Nixon and a walk to Lockhart. After Tejera struck out Klesko and Hunter, Battle lined a 2-and-2 pitch over the left-field wall for a three-run homer and a 12-0 Atlanta lead.

The home run was the only one in 29 major-league games for Battle, a 27-year-old Mississippian who’d had cups of coffee with Toronto in 1995 and Philadelphia in 1996 before catching on with the Braves organization in 1999. He batted .353 (6-for-17) in 15 games with Atlanta after being called up in September, but would never play in the majors again after 1999.

“I just try to keep it simple as possible,” Battle told the Atlanta Journal-Constitution. “Whether it’s Randy Johnson or a Triple-A pitch [sic], I just tell myself to get a good pitch and left it fly. They’re human. I’m human.”5

Backup catcher Greg Myers grounded out to end the sixth, and Braves reliever Terry Mulholland worked a 1-2-3 top of the seventh. Tejera was still in for the Marlins to start the bottom of the seventh, but didn’t finish it.

Randall Simon and Hernandez ripped back-to-back doubles to make it 13-0, and Nixon singled home Hernandez one out later for a 14-0 Braves lead. Tejera struck out Lockhart for the second out, but walked infielder Freddy Garcia and was replaced by Vic Darensbourg. Hunter followed with a single to score Nixon and put the Braves up 15-0, then Darensbourg surrendered a single to Battle before getting Myers to pop up and end the inning.

Braves left-hander Mike Remlinger pitched a perfect top of the eighth, and Atlanta tacked on its final three runs off Marlins reliever Brent Billingsley, a 24-year-old left-hander pitching in his eighth and final game in the majors.

The first five Braves of the inning reached base, beginning with Simon’s single, a walk to Hernandez and Lombard’s single. Nixon singled to score Simon and make it 16-0, then Lockhart walked to force home Hernandez with the Braves’ 17th run.

Billingsley rallied to get Jorge Fabregas on a double-play grounder, though Battle scored on the play for an 18-0 Atlanta lead. After Hunter walked, Battle struck out swinging to mercifully end the Braves’ assault.6

John Rocker pitched the ninth for Atlanta, walking Bruce Aven with one out. He got Redmond to ground out to first and struck out Julio Ramirez looking to end the game.

Five Atlanta pitchers combined on the five-hit shutout, with Glavine credited with the win and the bullpen working four hitless innings. Springer took the loss for the Marlins, tagged for seven runs in 2⅓ innings.

Nixon was the only Atlanta starter who played all nine innings, going 3-for-6 with two runs scored and an RBI. Battle had two hits and three RBIs off the bench, while Simon was 2-for-2 after entering the game and Lockhart drove in three as a sub.7

“It was a good day,” temporary spectator Chipper Jones told the Atlanta-Journal Constitution. “All the guys who don’t normally get a chance to strut their stuff got in there and showed off. It’s extremely pleasing not just for them, but us watching them.”8

The 18-0 victory is tied (as of 2019) for the biggest by shutout in Braves franchise history, with the Boston Beaneaters9 blanking the Buffalo Bisons by the same score on October 3, 1885. It is the second-largest margin of victory in team annals, behind only a 20-1 defeat of the St. Louis Cardinals on September 18, 1915.10

In addition to the sources mentioned in the notes, the author consulted baseball-reference.com.

3 The Marlins had squeaked out a 1-0 victory in 10 innings the previous day. Cliff Floyd provided the game’s only run with a solo homer in the top of the 10th off Braves reliever Derrin Ebert, a 22-year-old left-hander pitching in what would be the last of five games in his brief major-league career.

4 Redmond finished his career with a cool .438/.471/.604 slash line (batting average/on-base percentage/slugging percentage) with 21 hits and two home runs in 51 plate appearances against the Hall of Fame left-hander.

7 In addition to Nixon, Garcia, Battle, and Billingsley, Marlins second baseman Amaury Garcia – who struck out against Remlinger in the eighth inning in his only plate appearance – made it five players who appeared in their final regular-season major-league game that day. Nixon did play in five games for Atlanta in the postseason, however.

10 Less than four years later, on July 1, 2003, the Marlins returned the favor with a 20-1 victory over the Braves in Miami. Andruw Jones also played in that game for Atlanta, as did Lee, Lowell, Castro, Redmond, Tejera, and shortstop Alex Gonzalez for Florida, which won the World Series that season over the Yankees.